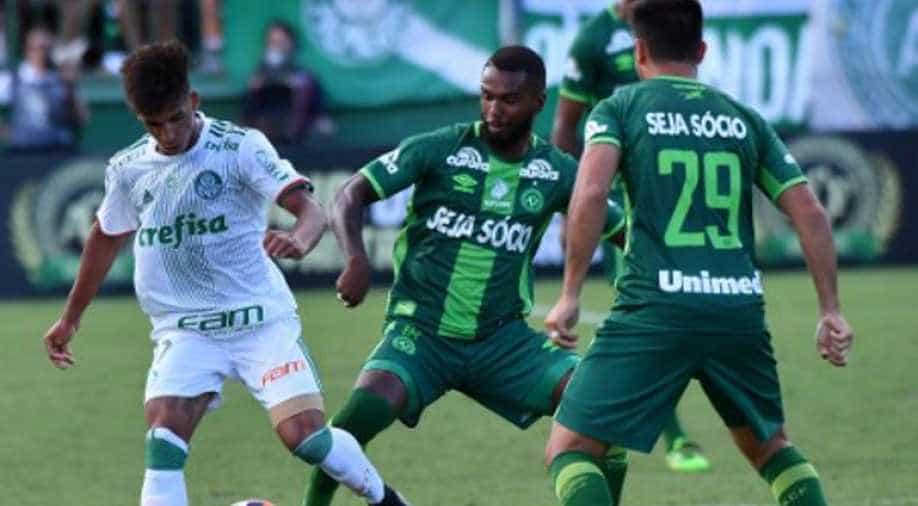 Although supporters had wildly snapped up club jerseys online, the stadium was not full. Tickets priced expensively at $25 each at a time of dire unemployment in Brazil likely likely kept some away. Photograph:( AFP )

Chapecoense, the up and coming Brazilian football club decimated by a plane crash, proudly strode back on the field Saturday in a new line-up for their first match since the tragedy.

The team took the field amid intense public and media attention focusing on the 20,000-place Arena Conda stadium in Chapeco decked out in the home side's green color.

Although supporters had wildly snapped up club jerseys online, and 241 journalists from around the world were accredited for the game, the stadium was not full. Tickets priced expensively at $25 each at a time of dire unemployment in Brazil likely kept some away.

n the 71st minute of the game, the stadium's crowd was asked to stand and clap in homage of the victims -- the beginning of a tradition for all home games played by Chapecoense

In the end, the game was a draw: 2-2 against Palmeiras.

Before the 4:30 pm (1830 GMT) kickoff, the three survivors of the crash that wiped out their teammates received the Copa Sudamericana trophy -- the honour the team had been vying for when it was wiped out in the crash -- to sustained applause.

Widows of the players killed then filed onto the grass to receive medals on behalf of their husbands in an emotionally powerful ceremony.

"I'm sure that those who have left us, if they are watching, would feel happy," one of the survivors, left-back Alan Ruschel, told a news conference ahead of the game.

The team's plane went down on November 28 in mountains near Colombia's city of Medellin as the team were flying in to play Atletico Nacional in the final of the Copa Sudamericana tournament. Of the 77 people on board, 71 lost their lives, including 19 players and 24 other club members.

In the 71st minute of the game, the stadium's crowd was asked to stand and clap in homage of the victims -- the beginning of a tradition for all home games played by Chapecoense.

Raphael Veiga opened with a point for Palmeiras, before Douglas Grolli put Chapecoense on the board with a goal that drew emotional cheers from the crowd. The rebuilt team rose to 2-1 when Amaral added a second goal before an equalizer came from Vitinho to make the final score 2-2.

The plane accident cut short the fairytale run of the unheralded team who had risen in five years from the fourth division and were playing in their first major final.

To rebuild the side, sporting director Rui Costa has recruited 22 players, most of them on loan.

He told AFP on Friday that the game was "the strongest argument... that this club refused to die."

Ruschel and another surviving players, defender Helio Neto, are on the path to recovery and hope to play this season.

Goalkeeper Jackson Follman had his foot amputated, ending his career.

The others who survived the crash were two of the plane's Bolivian crew and a radio reporter, Rafael Henzel, who said Saturday's game "is the first match of my new life".

The new-look Chapecoense has no big names, but include experienced players such as former Lille striker Tulio de Melo and ex-Benfica goalkeeper Artur Moraes.

Half the match proceeds were go to the families of those killed, while the rest will be used to rebuild the club.

The survivors met with management on Friday to discuss compensation from the Bolivian airline, Lamia, which owned the plane that crashed. The airline's director was arrested in December.

The tragedy was a blow to Chapeco, a town of 200,000 inhabitants where nearly everyone was one or two degrees connected with the team.

"We are a small community. We are not used to such a high profile," the mayor, Luciano Buligon, told AFP.

"But this global attention has comforted us. This big wave of solidarity is helping us to raise our head and to look ahead."

The popularity of Chapecoense has gone well beyond Brazil's borders.

Miguel Alvarez said he and friends had traveled from Argentina "for the inaugural match of this club that had a tragedy that affected everybody."

He added: "Football matters, yes, but mostly there has to be solidarity with the human side of it all."