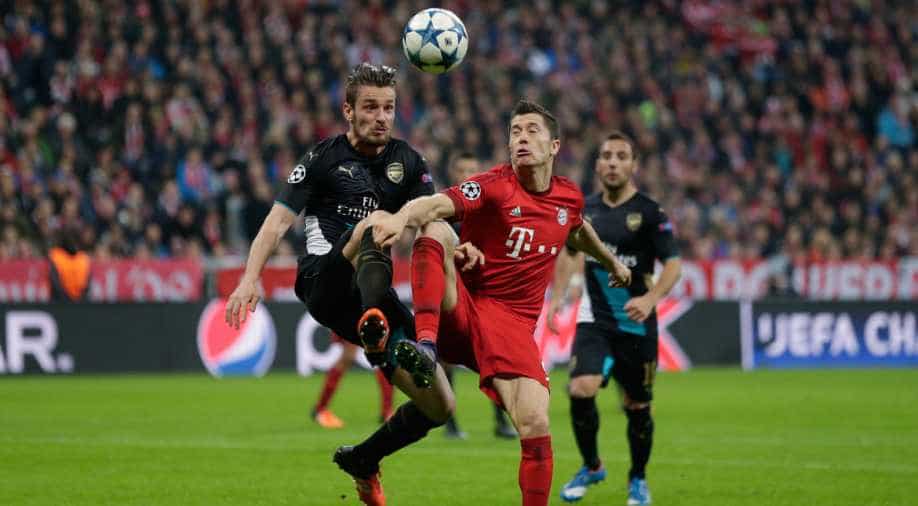 Bayern and Arsenal met in the knockout stages in 2005, 2013 and 2014 with the German champions winning on all three occasions. In photo: Mathieu Debuchy of Arsenal and Robert Lewandowski of Bayern Munich during the 2014 Champion League tie. Photograph:( Getty )

Arsenal will have another chance to beat Bayern Munich in a Champions League knockout tie after the sides were paired yet again in the round of 16 following Monday's draw.

Paris St Germain will also try to break a jinx when they face Spanish champions Barcelona, who knocked them out in the quarter-finals in 2013 and 2014.

Holders Real Madrid, who like Bayern finished as runners-up in their group and will therefore play the first leg at home, were given a tricky clash with Serie A side Napoli.

The draw also produced a potential grudge match as it pitted Bayer Leverkusen against Atletico Madrid, whose respective coaches Roger Schmidt and Diego Simeone were involved in an ugly touchline spat when the sides met two seasons ago.

On that occasion, Atletico went through on penalties after a 1-1 aggregate draw.

Arsenal may feel this could be their best chance to beat Bayern, whose domestic and European form has not been as dominant as in recent seasons.

"We are through to the knockout stage for the 14th consecutive season, which is testament to Arsene Wenger and the teams throughout that time," club secretary David Miles said.

"The fans will think we have got the rough end of the draw again - at some stage the tide has got to turn and we will beat them."

Serie A champions Juventus were drawn against Porto in a repeat of the 1984 European Cup Winners' Cup final which the Italian side won 2-1.

Sevilla and English champions Leicester City will meet for the first time as will Manchester City and AS Monaco.

Benfica and Borussia Dortmund will renew their rivalry after a 52-year wait, the sides having previously met in the 1963-64 European Cup.