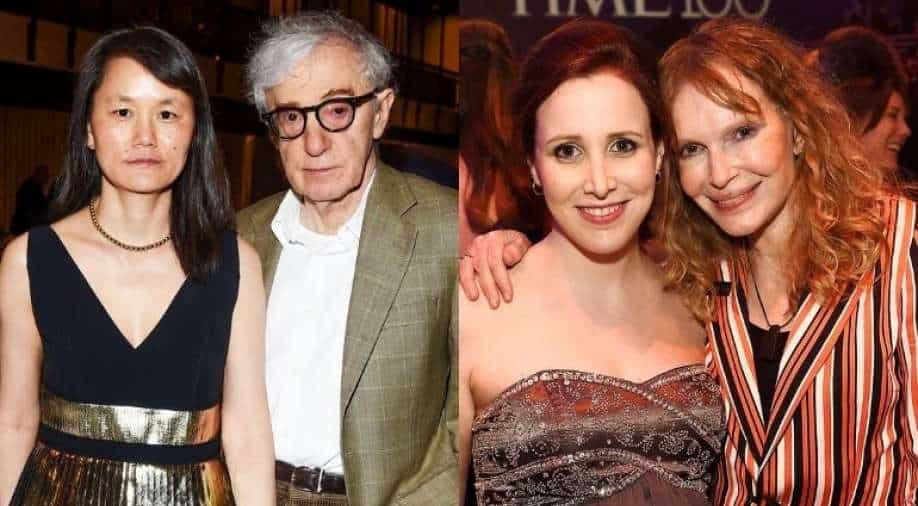 For years, the account given by Woody Allen’s then-7-year-old adopted daughter Dylan Farrow in the days following Aug. 4, 1992, when she says he sexually assaulted her, has been central to her case against him.

For years, the account given by Woody Allen’s then-7-year-old adopted daughter Dylan Farrow in the days following Aug. 4, 1992, when she says he sexually assaulted her, has been central to her case against him.

The specialists who heard the child’s account then and in later years have been divided on whether it was credible or whether it was coerced by her adoptive mother, Mia Farrow. But the public has only heard Dylan, as an adult, recount what she told her mother nearly 30 years ago.

Now Amy Ziering and Kirby Dick’s four-part documentary, “Allen v. Farrow,” which premiered Sunday on HBO (and streams on HBO Max), will for the first time include video footage of Dylan, recorded by her mother, describing what happened to her just days after she said Allen molested her.

The film is the latest development in a case that has been debated for nearly 30 years. It made headlines again in 2014 when Allen received a lifetime achievement award at the Golden Globes — and Dylan Farrow wrote an open letter, posted by New York Times columnist Nicholas Kristof, recounting her story in detail in response.

Then, in September 2018, New York magazine published a lengthy interview with Soon-Yi Previn, her first extended remarks on her relationship with Allen, who began to date her mother, Mia, when Previn was a young girl. Allen and Previn began a romantic relationship in 1991, when Previn was 21.

Allen has long denied assaulting his daughter and argued that Mia Farrow coached Dylan to say she had been assaulted after discovering that he and Previn were having an affair.

This timeline highlights important dates and developments in the narrative that has its roots in the 1970s. Based on New York Times articles and other news reports, it is a guide, not a comprehensive accounting, and will be updated periodically.

Mia Farrow and her husband, André Previn, adopt Soon-Yi Previn from Korea; she is believed to be about 7 years old.

Woody Allen and Farrow are introduced at Elaine’s, the Manhattan restaurant, and later begin a relationship.

Farrow adopts a baby girl, Dylan, who was born in Texas.

Farrow and Allen have a son, Ronan. Farrow would later suggest in a 2013 Vanity Fair interview that Frank Sinatra may have been his father.

Allen adopts Dylan and Moses Farrow, one of Mia Farrow’s sons, whom she adopted in 1980. Allen, who is 56, begins an affair with Farrow’s 21-year-old daughter, Soon-Yi Previn, around this time.

Farrow discovers nude photographs of Previn in Allen’s apartment. He later testifies in court that he thought the affair would remain secret.

With the affair between Allen and Previn continuing, Farrow calls Susan Coates, a psychologist who had been helping the family, and describes Allen as “satanic and evil” and begs her to “find a way to stop him.”

According to Dylan Farrow, Allen abused her that day, touching her genitalia. She was 7 at the time. She detailed her accusation in January 2018 on “CBS This Morning”:

DYLAN FARROW: I was taken to a small attic crawl space in my mother’s country house in Connecticut by my father. He instructed me to lay down on my stomach and play with my brother’s toy train that was set up. And he sat behind me in the doorway, and as I played with the toy train, I was sexually assaulted … As a 7-year-old I would say, I would have said he touched my private parts.

FARROW: Which I did say.

FARROW: As a 32-year-old, he touched my labia and my vulva with his finger.

Casey Pascal, a friend of Mia Farrow’s, tells her that Dylan’s babysitter described observing Allen in a position with Dylan that seemed inappropriate. According to Vanity Fair, Farrow immediately asked Dylan about it, and she gave her account to her mother.

Farrow calls Coates, the psychologist, and says Dylan has complained that Allen has abused her. A major question later considered in court was whether Farrow had coached her daughter during this period. According to later court testimony by Coates, she is struck by Farrow’s calm during the call, as opposed to her agitated state in the Aug. 1 call.

Aug. 17, 1992
Allen releases a statement confirming his relationship with Previn, saying it is “real and happily all true.” The same day, Connecticut state police announce that they are investigating Allen. The focus: the allegations that he molested Dylan.

Allen makes a public appearance to say he is “saddened” by the child abuse allegations and calls them “false” and “outrageous.”

Vanity Fair publishes “Mia’s Story,” a lengthy reported piece about Farrow, her family, the abuse allegations and her history with Allen.

Allen speaks on “60 Minutes” and defends himself against the molestation allegations.

After a seven-month inquiry by a team of child abuse investigators at Yale-New Haven Hospital, Allen’s lawyers say he has been cleared of molesting Dylan Farrow. Mia Farrow’s legal team calls the confidential report “incomplete and inaccurate.” The report, which was commissioned by Connecticut law enforcement, was never officially released, but media outlets reported some of its contents.
March 19, 1993

The custody trial begins. Allen takes the stand and describes the disintegration of his relationship with Mia Farrow. He testifies that she threatened him in phone calls and flew into rages in front of the children after the two started falling out.

Farrow takes the stand. She goes into detail about what Dylan told her the previous summer. She says she worried that Allen had a sexual attraction to Dylan from when she was 2 years old.

A sworn statement from John M. Leventhal, the doctor who led the Yale-New Haven team, is released to the public. It theorizes that Dylan was emotionally unstable and coached by Farrow to accuse Allen. The Yale-New Haven team interviewed Dylan nine times and said she changed details throughout the interviews; Leventhal said in his statement that he had interviewed her, but Vanity Fair reported years later that he had not.

Frank Maco, a state attorney in Connecticut, announces that while he has “probable cause” to prosecute Allen, he will decline to press charges to spare Dylan the trauma of a trial. Maco says he believes that Dylan had been molested.

Allen gives a long interview to Time magazine’s Walter Isaacson recounting his relationship with Soon-Yi — “The heart wants what it wants,” he says — and again denies the allegations by Dylan and Mia Farrow.

After years of relatively little news coverage of Allen and Mia and Dylan Farrow, Ronan Farrow posts on Twitter: “Happy father’s day — or as they call it in my family, happy brother-in-law’s day.”

Dylan Farrow goes on the record for the first time in an interview with Vanity Fair. She is 28 now and describes receiving entreaties from Allen from when she was 18. She says of the alleged abuse by Allen: “There’s a lot I don’t remember, but what happened in the attic I remember. I remember what I was wearing and what I wasn’t wearing.”

In response to Allen receiving a lifetime achievement award at the Golden Globes, which Diane Keaton accepted on his behalf, Ronan Farrow posts on Twitter: “Missed the Woody Allen tribute — did they put the part where a woman publicly confirmed he molested her at age 7 before or after 'Annie Hall'?”

After the letter, Mia Farrow posts on Twitter: “I love my daughter. I will always protect her. A lot of ugliness is going to be aimed at me. But this is not about me, it’s about her truth.”

In response to Dylan’s open letter, Moses Farrow defends Allen in an interview with People magazine, saying Mia Farrow coached the children to hate Allen. He says Dylan was never molested and that Mia Farrow was a bully.

Allen, writing in the Opinion section of The Times, denies the allegations again.

Diane Keaton and Alec Baldwin, two friends and stars in Allen films, defend him in the face of Dylan Farrow’s accusations. Cate Blanchett, the star of Allen’s “Blue Jasmine,” is more circumspect, saying she hopes Allen and the family “find some sort of resolution and peace.” Lena Dunham calls Dylan “courageous” and urges people to read her open letter.

In a guest column for The Hollywood Reporter, Ronan Farrow writes about the struggles Dylan faced in getting her story out and says he believes Dylan’s account.

The New York Times, and then Ronan Farrow in The New Yorker, publish articles about sexual harassment, abuse and rape allegations against Harvey Weinstein.

Allen says he feels “sad for Harvey” and warns against “a witch hunt atmosphere.” He later calls Weinstein “a sad, sick man.”

Grand Central Publishing, an imprint of Hachette Book Group, announces that it will publish Allen’s memoir, “Apropos of Nothing,” on April 7. The book is described as a comprehensive account of his life, “both personal and professional,” including details about his relationships with “family, friends and the loves of his life.”

In a statement on Twitter, Dylan Farrow harshly criticizes Hachette, which had previously published Ronan Farrow’s book “Catch and Kill,” which recounts how he reported sexual assault allegations against Weinstein. She calls the decision to publish Allen’s memoir “an utter betrayal.”

Dozens of Hachette employees stage a walkout in protest. The next day, Hachette announces it will no longer publish “Apropos of Nothing.”

Allen’s book is published by Arcade Publishing. In the book, he again denies that he sexually abused Dylan and calls the allegations “a total fabrication from start to finish.”

The HBO documentary “Allen v. Farrow” makes public for the first time the video footage from 1992 when Mia Farrow recorded Dylan, at age 7, reporting that Allen had sexually assaulted her.