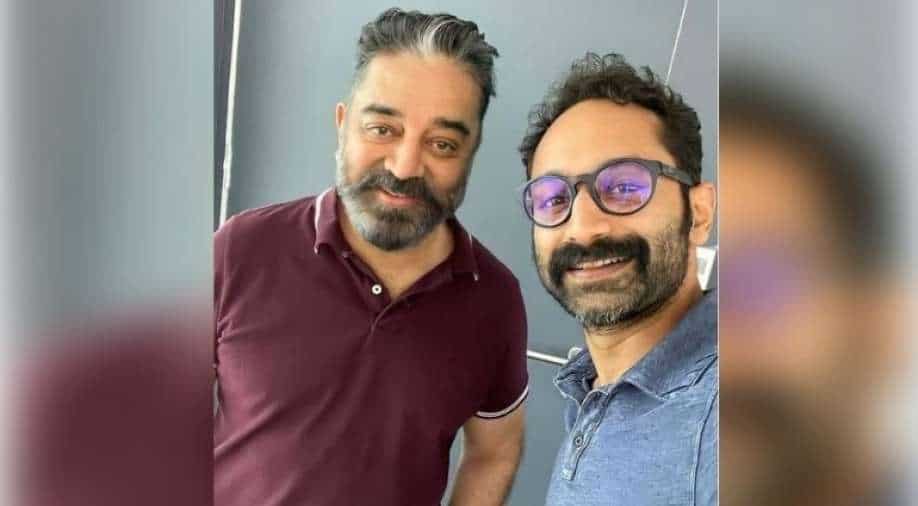 This is a selfie for the posterity. A photo of Kamal Haasan and Fahadh Faasil has been doing the rounds of the internet and fans can't contain their excitement.

This is a selfie for the posterity. A photo of Kamal Haasan and Fahadh Faasil has been doing the rounds of the internet and fans can't contain their excitement. Turns out Haasan recently watched Faasil's latest 'Malik' at a private screening in Chennai. Fahadh, director Mahesh Narayanan organised a private screening for Kamal Haasan and 'Vikram' director Lokesh Kanagaraj. For the uninitiated  'Vikram' is an upcoming film that features Haasan and Faasil along with Vijay Sethupathi.

A source close to the development revealed, "Fahadh Faasil and director Mahesh Narayanan arranged a private screening of their film, 'Malik' in Chennai. Along with Kamal Haasan, Lokesh Kanagaraj also attended the film's screening at a film studio in Chennai.

The source further added, "Like everyone else, Kamal Haasan was also left in awe with Fahadh's performance in 'Malik' and went on to appreciate the film's director, Mahesh."

By the looks of it, the picture is from the private screening that Haasan had attended

'Malik' brings together the blockbuster director-actor duo, Fahadh Faasil with Mahesh Narayan, for the third time. In the past, the duo has created cinematic magic on the big screen and have treated the audiences with superhit films like 'C U Soon', 'Take Off', and now 'Malik'.

Directed by Mahesh Narayanan, Malik narrates the tale of a leader in a fictional town in Kerala. The film shows the rise of an underdog and how he struggles to keep his people united against all odds. The film released on Amazon Prime Video on July 15 and has been garnering rave reviews from audience and critics alike. Fahadh Faasil sported multiple looks in the film.