Watch: Julianne Moore and husband Bart Freundlich speak on working in 'After the Wedding' 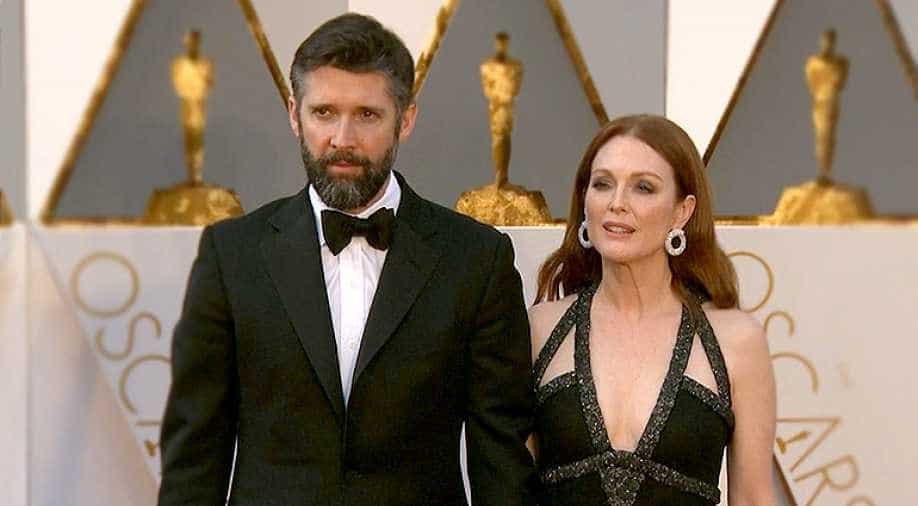 The Hollywood remake of the Oscar-nominated Danish film 'After the Wedding' reteams husband and wife filmmakers, Bart Freundlich and Julianne Moore. Both executives produce the film, with Freundlich also taking on writing and directorial duties, while Moore plays one of the leads in this mystery drama. Despite the saying 'Never mix work with pleasure', Freundlich and Moore have worked together several times in films such as 'The Myth of Fingerprints', 'World Traveler' and 'Trust the Man'. Photograph:( Reuters )

Both executive produce the film, with Freundlich also taking on writing and directorial duties, while Moore plays one of the leads in this mystery drama.

The Hollywood remake of the Oscar-nominated Danish film 'After the Wedding' reteams husband and wife filmmakers, Bart Freundlich and Julianne Moore.

Both executive produce the film, with Freundlich also taking on writing and directorial duties, while Moore plays one of the leads in this mystery drama.

Despite the saying 'Never mix work with pleasure', Freundlich and Moore have worked together several times on films such as 'The Myth of Fingerprints', 'World Traveler' and 'Trust the Man'.

Freundlich said "We met in a work experience on my first film "The Myth of Fingerprints" so as artists and as working people, there's not a lot of lines for us. We'll be in the car driving to our place in Long Island talking about the character and we'd be sitting at the table sometimes rewriting things together. That was a big benefit. I'm sure you don't want to work like that all the time. But for me, it was a big benefit, but for me, the biggest benefit, to be honest, is getting to have her talent - someone so fully inhabits a character - not only inhabits but can execute it and can communicate it. It's what's made her who she is."

The pair admitted they only had one disagreement on set about sleeping arrangements but overall they worked well as a team.

The film begins in India, where humanitarian worker Isabel (Michelle Williams) is fretting over funding for the orphanage she runs. Out of the blue, she receives a call from a potential donor who invites her to New York.

The donor is wealthy and brilliant businesswoman Theresa (Julianne Moore), who, as a courtesy, invites Isabel to her daughter's wedding that weekend.

However, while at the wedding, Isabel recognizes Theresa's husband and after that realization, a series of revelations begin to unfold, which have profound effects on both Isabel and Theresa's family.

"I love stories about relationships," said Moore. "That's always my favourite, my favourite to play as an actress, my favourite to watch when I'm looking for something to watch. I'm like 'Ooh, people and their families and their best friends and their husbands' so that, the combination of real things, real emotions and high drama was, to me, very compelling."

The original Danish film was released in 2006 and launched the career of Susanne Bier in Hollywood. She's gone on to direct hit TV projects 'The Night Manager' and 'Bird Box'.

Although the film sticks to the storyline of the original, Freundlich's film changes the sexes of all but one of the main protagonists.

"Susanne's movie is so complex and the question for me was when we make this gender flip which necessitated some big backstory changes, would it be too complex that it would get muddled?" said Freundlich. "But what ended up happening was it just gave it this whole other level of richness that the actors got to explore and it was really exciting because it was secret upon secret upon secret, which is one thing that I want people to know about this movie. It's a relationship movie but it's also entertaining. It's emotional in that it's really where it gets you but it's really fun to put together this story of what happened in this non-linear way," he added.

But how did Bier react to seeing her film reimagined in America?

"I can't imagine how weird it must be to have your movie remade especially when it's your own idea," said Freundlich. "She's been very very positive and she's given it her approval and I think it was different enough that she could appreciate it," he added.

'After the Wedding' goes on release in North America on August 9.