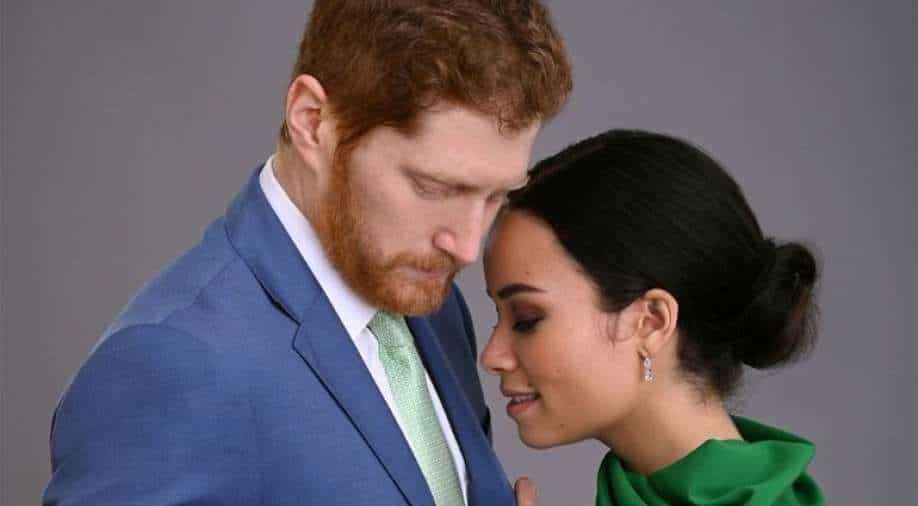 A still from 'Harry and Meghan: Escaping The Palace' Photograph:( Twitter )

While no official date has been announced for 'Harry and Meghan: Escaping The Palace'

The first teaser trailer for 'Harry and Meghan: Escaping The Palace' is out!

Makers dropped the first trailer of the upcoming movie based on the life of Meghan Markle and Prince Harry's exit from the royal family.

In the movie, Jordan Dean and Sydney Morton will take on the roles of the Duke and Duchess of Sussex in the movie.

The short clip reads 'Not all fairy tales have the perfect ending', and show Meghan and Harry hard time and a tumultuous last few years at the Royal palace to the exit and finally a bombshell interview with Oprah Winfrey.

The makers recreated the scene, as Dean was seen sporting the same style of grey suit that Harry wore when he spoke with Oprah. Morton meanwhile cradles baby bump under a black low-cut dress and both of them sits the same way the Royal couple sat.

Starting off with the dramatic music, the trailer begins with Harry telling his wife: "I see you literally being hounded to death, and I'm powerless to stop it.'' and at the back, the trailer flashes of the couple's tumultuous years, where the couple can be seen crying, Harry wearing an army uniform and finally Oprah interview.

“I can’t lose you” the couple then tells each other.

The film will recount what really happened inside the palace that drove Harry and Meghan to leave everything behind in order to make a future for themselves and their son Archie.

It will “detail Meghan’s growing isolation and sadness, their disappointment that ‘The Firm’ was not defending them against the press’s attacks and Harry’s fear that history would repeat itself and he would not be able to protect his wife and son from the same forces that caused his mother’s untimely death.”

No official date has been announced.