Was Reagan a precursor to Trump? A new documentary says yes 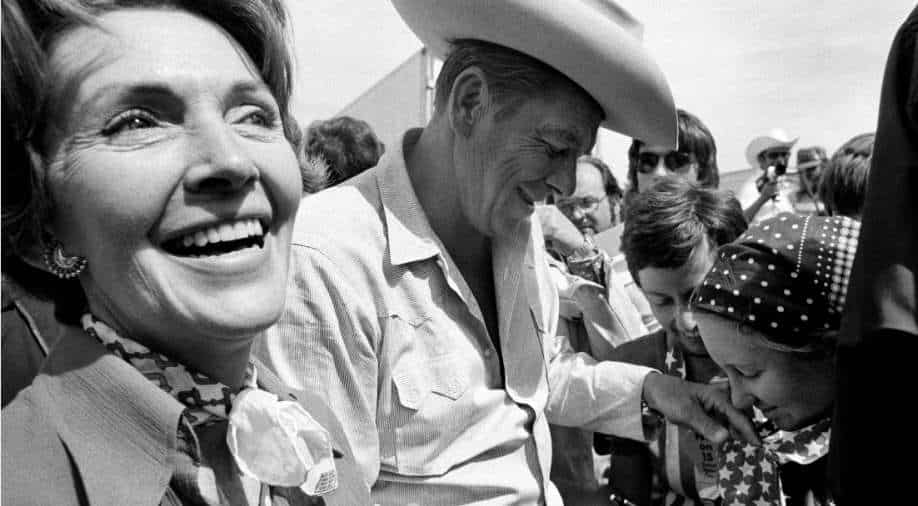 Ronald Reagan with his wife Nancy Reagan during a campaign event in Paso Robles Photograph:( AFP )

Over the course of nearly four hours, the documentary explores Reagan’s boyhood in Illinois and recounts his Hollywood years and the skills he learned as an actor

Was Ronald Reagan a kindhearted conservative who remade government and merits his standing as a beloved icon of the Republican Party? Or was he a glorified actor who won election with a coded racist appeal to white voters, setting the stage for the rise of President Donald Trump?

That debate has long absorbed Reagan historians and biographers, particularly these days as Reagan’s legacy seems ever more gauzy when held up against these past four years of the just-defeated president.

And it is now being tackled in “The Reagans,” a four-part documentary on Ronald and Nancy Reagan premiering Sunday on Showtime. It is the work of Matt Tyrnauer, a documentarian whose subjects have included Roy Cohn, fashion designer Valentino and Studio 54.

Tyrnauer grew up in Los Angeles when Reagan was governor of California. As a boy being driven to school by his father, he sat in traffic as the motorcade taking the newly elected president from his home in the Pacific Palisades to a postelection news conference in Century City sped down Sunset Boulevard.

From the second instalment of “The Reagans,” it is clear where Tyrnauer, who began his career as a junior aide in Democratic politics before moving into magazine writing and directing documentaries, comes down on Reagan’s place in the nation’s fraught history of race and politics. The episode opens with 40-year-old footage of Reagan in Mississippi, affirming his support for “states’ rights” at a county fair filled with white voters.

“The reason I wanted to make this was to show how Reagan in many ways paved the way for Trump — and the Republican Party that has now fallen into Trump’s hands,” he said in a video interview from his Beverly Hills home a week before the president’s defeat was called. “I really thought it was very important to show that the Republican Party, certainly after the 1950s and since the era of this country’s civil rights movement and reckoning, has been on the wrong side of history. And Reagan was right at the center of that.”

Over the course of nearly four hours, the documentary explores Reagan’s boyhood in Illinois and recounts his Hollywood years and the skills he learned as an actor — the bright smile, his affable if slightly inscrutable affect - that made him such a powerful candidate for president. Recalling Reagan’s first screen test, studio head Jack Warner said, in a 1960s interview clip included in the documentary, that the actor’s “personality projected off the screen and into the audience.”

The series offers a portrait of Nancy Reagan as a powerful and manipulative behind-the-scenes player who was essential to her husband’s success. It follows Ronald Reagan’s evolution from a liberal, the son of two Democrats and the former head of the Screen Actors Guild, to a staunch anti-communist conservative.

And it is striking, after this polarizing election and four years of the Trump presidency, to hear Reagan’s tough talk about law and order, to note his 1980 campaign slogan - “Make America Great Again” - and to watch the parallels between a movie star and a reality television star, both of whom knew how to command the attention of the American public and the media.

But more than anything, this documentary is animated by the notion of Reagan as an early practitioner of dog-whistle politics, a member of the generation of politicians who used coded appeals directed at an attuned audience of white voters.

“I believe in states’ rights,” he said in the summer of 1980 at the Neshoba County Fair near Philadelphia, Mississippi, 7 miles from where three civil rights workers were murdered in 1964. It is a dramatic moment in which he seemingly affirms the power of Southern states to defy a federal government trying to end discrimination: The camera follows as he steps off his campaign plane to be greeted by a grinning Trent Lott, then a senator from Mississippi, and shadows his motorcade winding through crowds of white voters.

To be clear, the idea of Reagan as a politician who swam in the waters of American racism, preparing the way for a Trump presidency, is not a consensus position.

“To me, Reagan is the anti-Trump,” Lou Cannon, a former Washington Post reporter and Reagan biographer who appears in the documentary, said last week. “If you look at Reagan’s presidency, you did not see a career of racial incitement. It’s not a fair rap.

“Reagan is the antithesis of Trump in so many ways,” he added. “He was uniformly courteous and nice and decent to people. Trump, by the way he acts, has made us see that human decency in a political leader is important. Second, he was a compromiser. He always said that he was willing to take half a loaf. He got legislation through because of that.”

Historian Rick Perlstein cautioned against reading too much into the Mississippi speech, arguing that it oversimplified Reagan’s complicated relationship with race.

“Liberals, and I am a proud liberal, are always looking for smoking guns to prove that conservatives are racist,” Perlstein said an interview.

In his new book, “Reaganland: America’s Right Turn 1976-1980,” Perlstein says the former president’s invocation of states’ rights was halfhearted, buried midway into his speech, and inserted at Lott’s suggestion. (And to what end? Reagan barely squeaked by Jimmy Carter in Mississippi.)

Tyrnauer is not a presence in any of his documentaries, and he is heard only twice in “The Reagans,” asking questions off camera. He builds his case with interviews — Ron Reagan Jr., surviving members of Reagan’s White House, journalists from the era and historians — along with contemporaneous news clips and rare archival film footage.

“What I look for is the obscure stuff, or the angles you never saw,” he said. The documentary opens with behind-the-scenes footage in which Reagan’s advertising team is filming the president speaking in the Oval Office for a 1984 campaign commercial. At the side of the shot, aides look at a stopwatch, impressed that this former actor clocked in for the 60-second advertisement at 57 seconds.

Tyrnauer tracked down a lost documentary about Nancy Reagan from when Reagan was governor, with intimate shots of the new governor and his family moving into their new home in Sacramento, and scenes of Nancy Reagan back in Los Angeles shopping for dog food at the Brentwood Country Mart (and admitting, with obvious chagrin, that she did not have money to pay for it).

Most of all, in making his case against the former president, Tyrnauer draws on footage of Reagan in his early days as a politician, as he likened streets in crime-stricken urban areas to “jungle paths” and talked about “welfare queens” in disparaging what he described as a liberal state.

“What was really astonishing to me was seeing how much film there was of Reagan in the act of dog whistling,” Tyrnauer said. “And some of his dog whistles at the time would be considered foghorns today.”

I met Tyrnauer while covering the 1988 presidential campaign; he was an assistant at the Boston headquarters of Michael Dukakis, the Democrat who would lose to George H.W. Bush. Tyrnauer left politics to become a writer at Vanity Fair before turning to directing documentaries. His first, "Valentino: The Last Emperor,” released in 2009, was based on a profile he wrote in Vanity Fair. His Cohn documentary, “Where’s My Roy Cohn?,” explored the relationship between Cohn and one of his most famous law clients, Donald Trump.

The Reagan documentary would have been challenging at any time — the Reagans are well-plowed ground. It may have been 32 years since the end of his presidency, but he is remembered by millions of Americans, defined for many of them by the upbeat advertisement that opened with the words “It’s morning again in America,” which helped lift him to a landslide reelection over Walter Mondale in 1984. Nancy Reagan was, apart from Hillary Clinton, arguably the most powerful and polarizing first lady of the past 75 years.

But this project was complicated by the onset of the pandemic. Tyrnauer and his staff were forced to work from their homes. Archives, and in particular the files and videos collected by the Ronald Reagan Presidential Library in Simi Valley, California, abruptly shut down.

Interviews became far more complicated. Most of the subjects are, not surprisingly, older and thus wary of letting a film crew into their homes. Tyrnauer finished his interview with Lesley Stahl, the Reagan White House reporter for CBS, a week before she was hospitalized with COVID-19. Tyrnauer, changing gears, conducted half of the project’s 30 interviews by video from his home, sending in local film crews.

Many top figures in Reagan’s world sat down for interviews, including James Baker III, Reagan’s chief of staff; George Shultz, secretary of state; and Colin Powell, national security adviser. The Reagans’ son, Ron, is a prominent voice throughout the series, chatty and candid. But their daughter, Patti Davis, is notably absent. (Tyrnauer said she was working on another project.)

Stahl, in her interview, describes the allure this first family had over the media as she recalls the first time he stepped into the White House briefing room to talk to the press.

“We all kind of melted,” she says. “We were puddles on the floor.”

Most jarring, for anyone looking for parallels between the Trump and Reagan years, is the appearance by Dr. Anthony Fauci, director of the National Institute of Allergy and Infectious Diseases. The coronavirus crisis is not his first experience with either a pandemic or a president who failed to deal with one: Reagan largely ignored the deadly AIDS epidemic during its early years, and the documentary presents this as one of his most consequential failures as president.

“I was very frustrated with seeing an emerging catastrophe, and he wanted nothing to do with it,” Fauci says.

As a rule, Americans’ views of presidents soften with time — Trump may prove to be the exception — and that certainly happened with Reagan. But this documentary invites a reappraisal. It is a harsh portrait of Reagan as a politician and as a president, and it seems likely to reignite old arguments. Tyrnauer argues that Reagan has been protected by historians, Republicans and journalists because of his political success and likability.

“You can listen to podcast after podcast today of respectable historians talking about all of the dog-whistle sins of the past,” Tyrnauer said. “George Wallace comes up, and Richard Nixon comes up with the Southern strategy. And Willie Horton comes up and George H.W. Bush comes up. Reagan is shockingly absent from all those narratives and discussions.

“He was an extraordinarily intuitive politician and ultimately among the most successful of his generation,” Tyrnauer said. “But how is he not held accountable?”

Eternals: Despite a massive buzz, this is one of the lowest rated MCU film