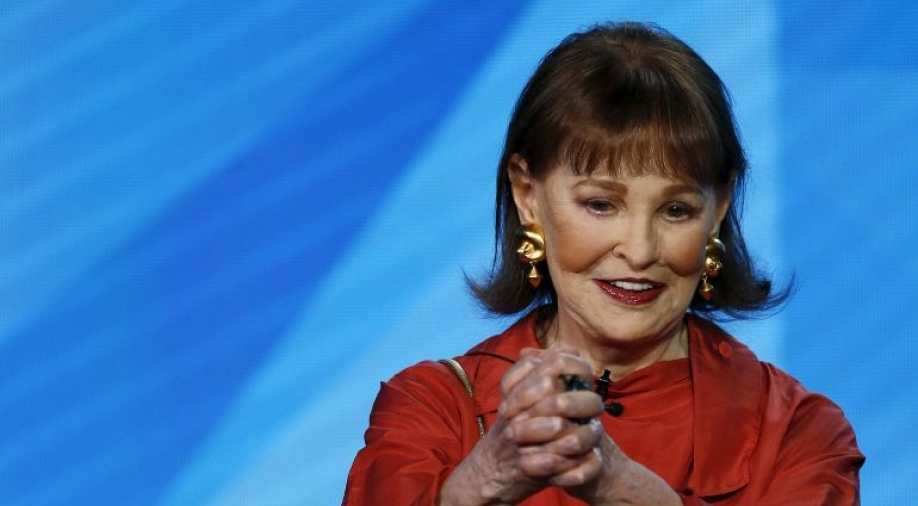 Vanderbilt became a fashion icon in the 1970s with an eponymous line of tight-fitting blue jeans that bore her signature and trademark swan logo.

Gloria Vanderbilt, the "poor little rich girl" who lived a life at the highest levels of fashion, society and wealth as an heir to one of the greatest family fortunes in US history, died on Monday at the age of 95, her son CNN correspondent Anderson Cooper said.

Vanderbilt became a fashion icon in the 1970s with an eponymous line of tight-fitting blue jeans that bore her signature and trademark swan logo. They were a must-have for any woman with aspirations to style.

Vanderbilt wrote that as a girl she had considered becoming a nun, which would have been an incredible loss to the chroniclers of high society, celebrity and tumult. Instead of a nunnery, she went on to a life that could have provided storylines for dozens of soap operas, romance novels, Broadway musicals and tear-jerker movies.

Vanderbilt was born into wealth on February 20, 1924, in New York City. She was the great-great-granddaughter of Cornelius Vanderbilt, the 19th-century railroad and shipping magnate who amassed one of the greatest fortunes of the time.

She was not yet 2 years old when her father, Reginald Claypoole Vanderbilt, died and she spent many of the following years living in Europe with her mother, Gloria Morgan Vanderbilt, on her trust fund, which was estimated at $2.5 million - the equivalent of at least $33 million today.

Gloria's aunt, Gertrude Vanderbilt Whitney, who founded the Whitney Museum of American Art, said Gloria's mother was misusing the trust fund on a free-wheeling lifestyle that included a female lover, and went to court. Whitney won custody of the child in an acrimonious, sensationalized case that eventually reached the US Supreme Court.

The custody battle featured high-society character witnesses for both sides and testimony so sensitive that courtroom spectators were barred at times. The public closely followed the fate of "Little Gloria," who was protected at the time by 12 bodyguards.

Whitney eventually won custody of Gloria with one judge reproaching the girl's mother for living a lifestyle that was "calculated to destroy her health and neglectful of her moral, spiritual and mental education."

Vanderbilt said being taken from her mother started her on a lifelong quest for love and approval. This led her to marry a 32-year-old Hollywood agent, Pat DiCicco, when she was only 17. They divorced in 1945, when at the age of 21, Vanderbilt married conductor Leopold Stokowski, who was 63.

The couple had two sons and by the time they separated in 1955, Vanderbilt was being seen around New York with singer Frank Sinatra. After another divorce, Vanderbilt found herself in another custody fight - this time with Stokowski claiming that she was an unfit mother who spent too much time in psychotherapy.

From 1956 to 1963 Vanderbilt was married to Sidney Lumet, director of the acclaimed films "12 Angry Men," "Dog Day Afternoon," "Serpico" and "Network."

She was married to her fourth husband, writer Wyatt Cooper, until his death during heart surgery in 1978. They had two sons, Anderson and Carter.

In 1988, in the greatest tragedy of Vanderbilt's life, Carter, aged 23, killed himself by jumping from the family's 14th-floor apartment in New York, in spite of his mother's attempts to stop him.

She later wrote a memoir, "A Mother's Story," in which she reflected on her own painful upbringing and blamed Carter's suicide on psychosis brought on by an anti-asthma drug.

Vanderbilt called her son's death "the final loss, the fatal loss that stripped me bare," and said she did not think she could survive it.

In a 2012 television interview with her son Anderson, she said she thought about the tragedy every day and that she had considered jumping after her son.

"There was a moment when I thought I was going to jump after him but then I thought of you... and it stopped me from doing that," she told Anderson.

Vanderbilt dabbled in acting, painting, poetry and modelling before the Hallmark greeting card company bought some of her artwork for a line of paper goods in the early 1970s. Her work also graced a collection of scarves before she started the line of jeans and expanded to perfume, shoes, leather goods and accessories. In 1978 she sold her Gloria Vanderbilt brand and started another fashion company.

Vanderbilt won a $1.5 million judgment in 1993 against her lawyer and psychiatrist, claiming they had stolen from her. Because the lawyer had not paid her taxes for several years, she owed the Internal Revenue Service so much money she had to sell a summer home in Southampton and a New York City home.

"I embrace it all - the pain and the pleasure, the drama and the disappointments," Vanderbilt wrote in summing up her life in the romantic memoir, "It Seemed Important at the Time."