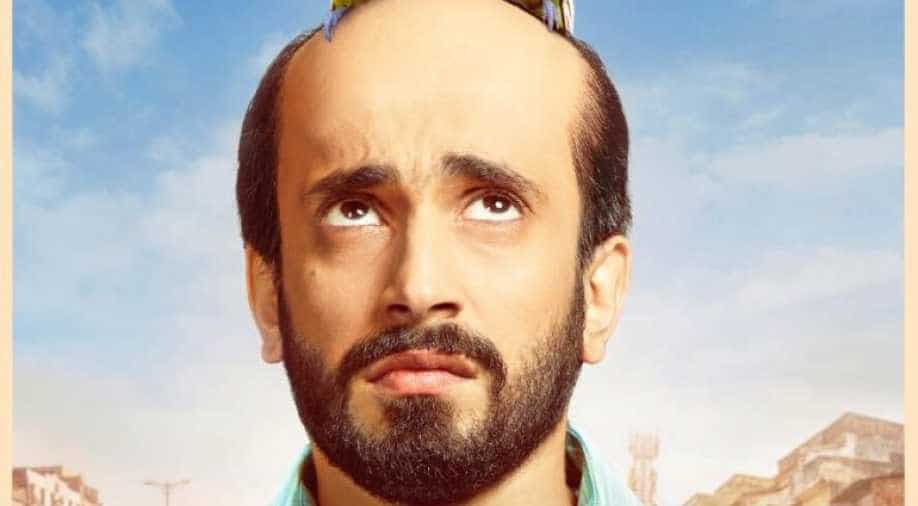 Sunny Singh in a poster of 'Ujda Chaman' Photograph:( Twitter )

The concept of beauty and flawed notion about it has been explored in films before. So 'Ujda Chaman' does not really tell us anything that we don't know already.

When the first trailer of Abhishek Pathak’s ‘Ujda Chaman’ came out, it showed promise. It released a few days after the trailer of ‘Bala’- another film, with a similar story and a bigger star playing the lead- yet ‘Ujda Chaman’ showed more potential of being a genuinely funny film with a social message.

A remake of Kannada film, 'Ondu Motteya Kathe', the film is based on a 30-year-old Hindi DU professor Chaman Kohli ( Sunny Singh) and his pursuit to find a suitable wife for himself and the story tries to highlight the obsession that we have for beauty. Those who do not fit into our notion of ideal beauty are often mocked at. Chaman is an underconfident man, primarily because of his premature balding. He lives with his over-enthusiastic and boisterous parents and younger brother in modest accommodation in West Delhi.

After looking for a suitable wife for the past 5 years, Chaman decides to take matters in his own hands and tries to hit on fellow colleagues at work and even briefly dates his student. When nothing works, Chaman sets up a tinder account, with a misleading photo and finds a match in Apsara (Maanvi Gagroo).

When they do finally meet, they realise they both are desperate for partners but judge each other for their appearances. He is bald, she is overweight and their match is not made in heaven. But their parents think otherwise.

While the film intends to deliver a strong message, the screenplay derails it quite a bit. The first half is spent concentrating on a sullen face Chaman and his quest to find love. He teaches in a college where he is subjected to constant ridicule by students and colleagues alike and being the insecure, underconfident person that he is – he never really fights back. The ridicule and the taunts become repetitive after a point and it seems writers lose track in the first half just trying to establish Chaman and his story.

Maanvi Gagroo appears right before the interval and it's her presence that lifts the second half to a great extent. Gagroo plays the charming, sweet Apsara effortlessly and brings in freshness to a very predictable plot. She also plays the inner voice to Chaman's character who with deep insecurities of his looks makes fun of her weight. Gagroo's character is perhaps the most well-written character in the film and the actress does justice to her role.

Grusha Kapoor and Atul Kumar play Singh’s over-enthusiastic parents and the film’s best moments are reserved for their one-liners. But the actors only help the film to a certain extent and bring in a few laughs in a film that keeps meandering and never really manages to pull up its sluggish narrative.  Neither do quirky lines come together fully- creating a half-hearted attempt at making a socially relevant slice of life film.

It's exactly two hours long but the first half seems unending as not much is happening. The second half somewhat redeems itself but the makers only address the issue at surface level and never delve deeper.

Sunny Singh, who has shown immense potential in ‘Pyaar Ka Punchnaama 2’ and ‘ Sonu Ke Titu Ki Sweety’ before, keeps a straight face throughout. His Chaman is not the most exciting person to know, and Singh underplays the role. Chaman is shallow, insecure and under-confident and while a lot of time is spent on focussing him, his eventual transformation and change of heart seem out of the blue and rather forced. Singh’s expressions barely change over two hours. He sulks almost the entire film making his character appear unidimensional.

The concept of beauty and flawed notion about it has been explored in films before. So 'Ujda Chaman' does not really tell us anything that we don't know already. Yes, it does tackle premature balding and how the society reacts to it- a topic that remained untouched all these years, but ultimately it delivers the same message more or less which is not a problem provided it was packaged well. Most of the jokes and jibes at Chaman fall flat and you chuckle more at the middle-class family trying to live their daily lives than at Chaman or his plight. Neither does the film have a defining moment that stays with you after the film is over. Ultimately,' Ujda Chaman' appears to be quite bland and underwhelming.