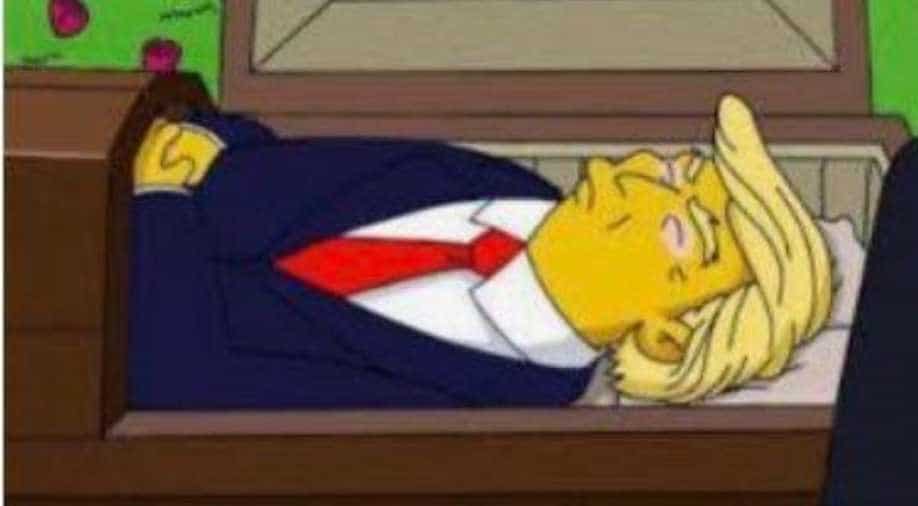 Fake image of a cartoon version of Donald Trump in a coffin has been doing the rounds of internet Photograph:( Twitter )

There's a theory doing the rounds of social media that claims that popular show 'The Simpsons' had predicted Donald Trump's death on August 27, 2020.

There's a theory doing the rounds of social media that claims that popular show 'The Simpsons' had predicted Donald Trump's death on August 27, 2020. Posts of an image of the cartoon version of Trump lying in a coffin has been circulated on social media.The image gives the impression that it is still from one of the episodes of  'The Simpsons'.

Turns out it is a fake image that has gone viral and no episode of the popular series actually predicted his death.

Did the Simpsons predict anything for August 27, 2020? Well, no. The date of August 27 was in fact used as a random date by various TikTok users to troll their viewers.

One particular viral video that urged viewers to look for significant incidents linked to August 27, 2020, and strangely enough got linked to Donald Trump's death news- which became viral in no time.

Other people had maybe posted #August27 vids before her (it’s sort of unclear) but hers was one of the main ones to blow up. She, like everyone else, just did it as a joke/troll basically. She said in a comment she “just wanted to make a weird video” pic.twitter.com/qobVA6JX3G

Many Twitter users who shared the fake image of a cartoon Trump in a coffin were left confused about the theory's origin but were also aware of its existence. Some of the avid fans of the show reasoned that the popular series had never aired any episode predicting the US President's death.

So my daughter said that on an episode of the Simpson's, Trump dies around Aug 27th?? Can anyone confirm that episode ?

Your death was predicted on the simpsons

The image of dead Trump is fake and was never on The Simpsons. pic.twitter.com/Rg0I9vlb0P

This isn't the first time that a viral theory has been attributed to the Simpsons. In the recent past, the show has been attributed to predicting Tom Hanks' testing positive for coronavirus and that the world at large would have to self isolate following the outbreak of a virus. All of them turned out to be a hoax.