'Terminator: Dark Fate' review: It is time to put the franchise to rest 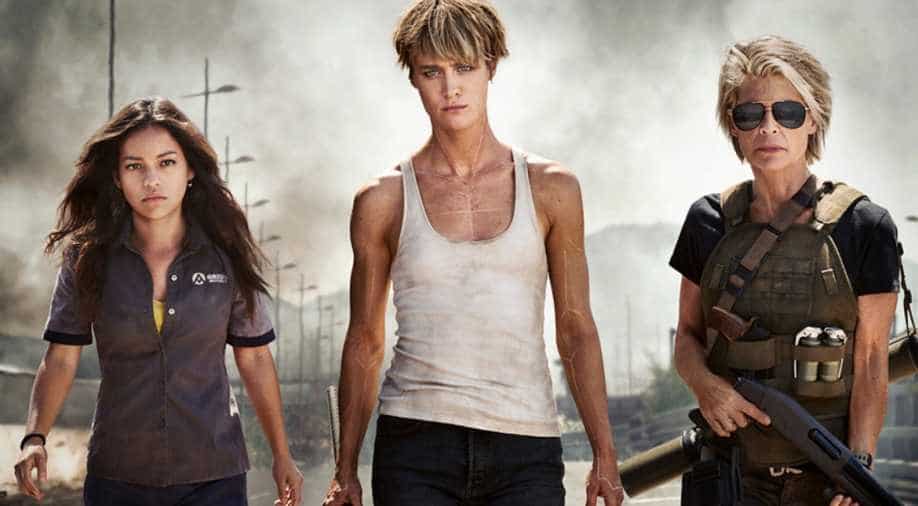 What works for the film, though,, are the three women who take on the world together and fight menacing machines to protect their future.

The terminator series has been an integral part of childhood for those who grew up in the 90s. Arnold Schwarzenegger's futuristic film had everyone talking about it back when it first came out in 1984. The second part 'Terminator 2: Judgement Day' - by far the best film in the franchise- became a cult classic.

Over the years, several films and even a TV series have tried to recreate the magic that the first two films created but none have been able to match the original. So when producer James Cameron, decided a reboot in 2019- it made sense to have the original cast of Arnold Schwarzenegger and Linda Hamilton on board.

In 'Terminator: Dark Fate', Schwarznegger is Cal, a domesticated man-machine, living a quiet life in a cottage in the woods with his family. He may still be a T-800, an android, but he now has some emotional attachments. He does household chores, lives a happy, peaceful life and sneakily keeps track of all the AI activities happening around the world.

Meanwhile, in Mexico, the Skynet sends a Rev-9 to kill Dani who is eventually saved by a humanoid called Grace and Sara Connor. Yes, Connor is still around and in the grief of her son's death which happened 28 years back, Connor is now a fugitive, who gets anonymous tip-offs about infiltrations from the future and once such message leads her to Mexico to save Dani. Grace and Sara save Dani but they have to be on the run as Rev-9 is still on the loose and the shape-shifting machine is difficult to kill, for obvious reasons.

The film entirely concentrates on the three women. A clueless Dani soon learns the ropes from her two protectors and learns that how her life is precious as she, in the future, will raise an army against the machines under Skynet's regime, which they obviously do not want and hence want her killed now itself.

As Sara meets T-800, old wounds resurface as she is reminded of how her son John was killed by the Terminator in 'Judgement Day' but they now have to work together to eradicate Rev-9.

Lots of mind-numbing action sequences, unending chase sequences, and a very jaded storyline make the rest of the film.

When the first film of the series came out, the premise of machines taking over the future and the human race held a lot of potential. It was exciting as well as scary to watch the battle between humans and the machines back then. But three decades later, when the same plot has been used in several sci-fi films in Hollywood, the plot seems very jaded. Sure, 'Dark Fate' tries to incorporate modern-day machines like mobile phones and GPS tracking devices into the narrative- but the overall experience is not exciting anymore. The action sequences numb your sensibilities after a point, they do not give an adrenaline rush.

What works for the film though are the three women who take on the world together and fight menacing machines to protect their future. Hamilton, who is now well above 60, stuns in her aged, angsty avatar. A mother who has lost her son decades ago and since then gone rogue, Hamilton brings in the right emotions to her character Sara Cohen. Giving her company as half human-half robot Grace, actress Mackenzie Davis delivers a solid performance. She performs the stunts convincingly and looks apt in her role so does actress Natalia Reyes who plays the naive Dani who comes of age as she loses her entire family.

The three women, though, cant salvage a repetitive plot. Filmmaker Tim Miller sticks to the old template and doesn't try to deliver anything that we haven't seen altogether. He tries to infuse some humour especially when Schwarznegger is introduced in the narrative. But the actor seems jaded himself, perhaps being too aware of the predictability of the plot.

In several previous installments, Schwarzenneger would declare 'I'll be back' in the end but after 'Dark Fate', perhaps he should bid farewell to the beloved character. Unless the makers can think a little out of the box for the next one, it is best to put the franchise and T-800  to rest.