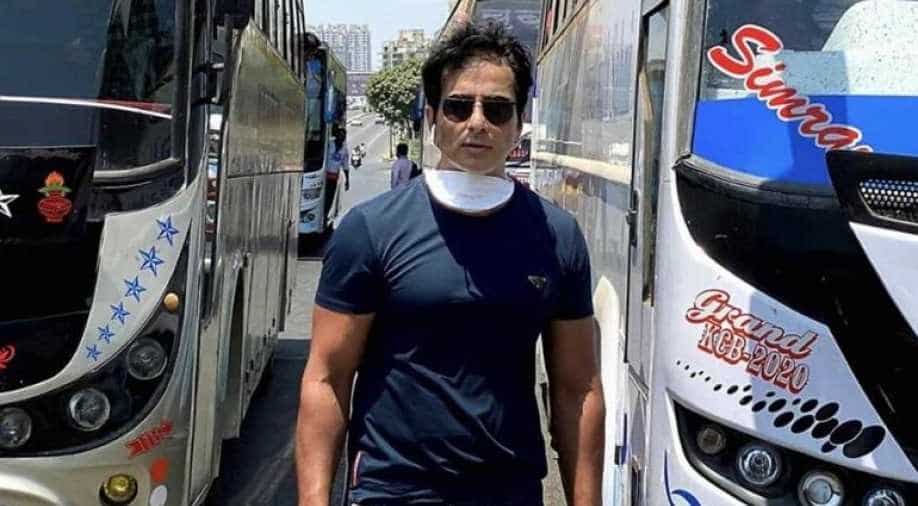 Sonu Sood has sent over 750 migrant workers in around 20 buses to Karnataka and UP so far.

Sonu Sood has been winning all our hearts by becoming a hope for thousands of migrant workers stranded in Mumbai during the lockdown, as the actor arranged buses and food for hundreds of migrants stuck in the city.

Actor Sonu Sood has now taken over the Twitter trend, on Saturday, #SonuSood topped  trends as netizens lauded the actor for being at the forefront amid the time of crisis, meanwhile the actor's twitter timeline which is being flooded with requests from people stuck in various corners of the country, its look like he is the last hope for the workers.

In his initiative called Ghar Bhejo in which he collaborates with restaurateur Neeti Goel, 'Dabangg 3' actor has sent over 750 migrant workers in around 20 buses to Karnataka and UP so far.

From a user who called him Home Minister lite to others who found him the best Central or State Government for anyone.

@SonuSood 🙏 He may be a villain on screen but he's a real life hero, helping for migrant workers who stranded in mumbai due to lockdown.
proud of you sir #SonuSood 🙏♥️✌️ pic.twitter.com/jhVcw5YFxl

Sonu Sood Sir is the Vaccine for Migrant Workers. He is not less than God for the workers & peoples who want to go home & meet their family. Love you 3000 sir, you're doing a remarkable job. Real Hero ❤️ #SonuSood pic.twitter.com/fKgwVCMCc1