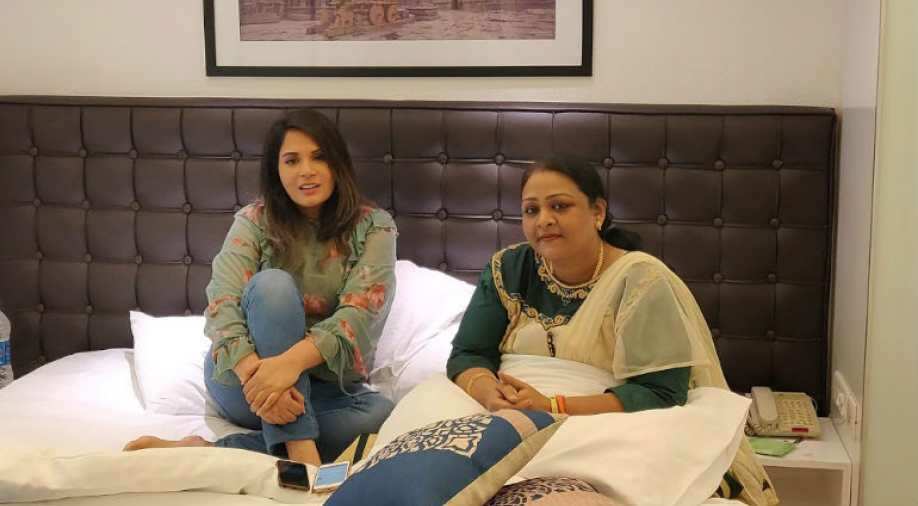 Richa Chadha and Shakeela Khan met recently in Bangalore. Chadha will be playing Shakeela in a biopic based on the southern star. Photograph:( WION Web Team )

To prepare for her role, Chadha has done several rounds of meetings with Shakeela, to get a better comprehension of the character she is required to play. Now, the director, impressed by the bonding of the two actresses has roped in real Shakeela for a cameo role in the movie.

Director Indrajit Lankesh has roped in Shakeela, the biggest South -Indian adult film star of the 90s to play a cameo role in a biopic based on her life.

Richa Chadha, who plays Shakeela in the film, has already started shooting for the film which also co-stars Pankaj Tripathi.

To prepare for her role, Chadha has done several rounds of meetings with Shakeela, to get a better comprehension of the character she is required to play. Now, the director, impressed by the bonding of the two actresses has roped in real Shakeela for a cameo role in the movie.

Speaking about the new addition in the cast, director Indrajit Lankesh said, “I always wanted to make a film on Shakeela, I was immensely impressed with her onscreen and offscreen personality. I wanted to portray her story, the hardships and rough phase when she was not getting films and was trying for character roles. I wanted to show the true story behind the superstar Shakeela. She has been an integral part of the making of this film and she has given us such detailed insights into her life. Even Richa got to spend time with her, understand her style of talking, her body language and such nuances. In fact, when she came on set, she gave us very interesting insights like about art direction and how her house was and is in real life, such small details which have helped us. It was nice shooting her for Shakeela biopic, though I have shot with her before for my another film in 2003. That sparked an interest in me to make a film on her and in 2015 after conceiving the idea of making a film on her I met her and realised my dream.I feel every woman and girl who wants t be an actress should see her story, to know what she went through to become an actress and how it was such a compelling rags to riches to rags story of her life”.

She'll drive you crazy - but #WhoIsShakeela? Hold tight, you'll get to know soon.

For those coming in late, Shakeela Khan was a big name in the southern film industry in the late '80s and early 1990s.

Her popularity was such that including her in films would change the fortune of the film and its producer.

When a film starring Shakeela released, other filmmakers would push back the release of their films fearing loss at the box office.

Shakeela biopic, which is yet to be titled, is set to release in 2019.