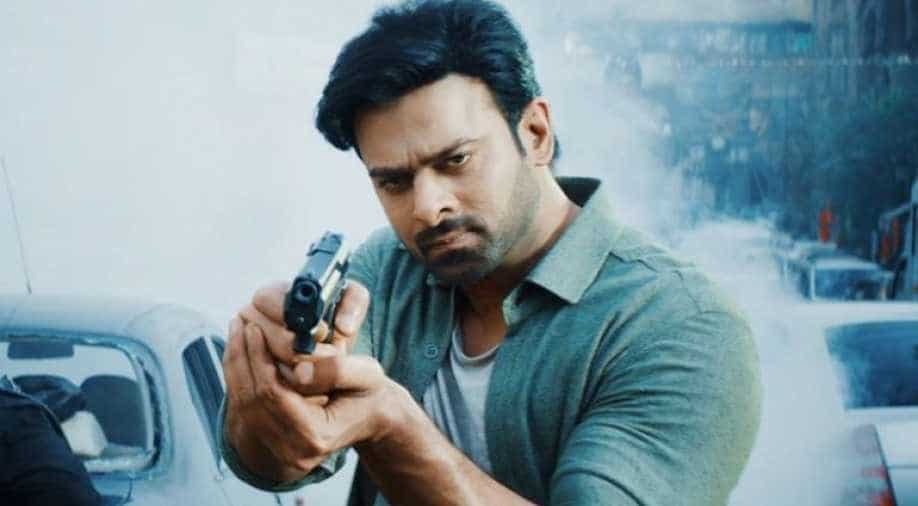 Prabhas in a still from 'Saaho'. (Youtube/@TSeries) Photograph:( Others )

In the garb of making a stylised action thriller, the makers completely lose focus on logic and a coherent storyline.

Writer, director Sujeeth has taken the 'Baahubali' tag attached to actor Prabhas' name a bit too seriously. The duo's new film, 'Saaho' may be set in present times, but Sujeeth creates a make-believe world where Prabhas is unbeatable.

In 'Saaho', Prabhas fights a python, a panther, skydives from tall skyscrapers without gear and in one scene leaps and chases crashing helicopter mid-air(again without gear) and survives every single time. Saaho is the new age superhero in the world of goons, gamblers, and mobsters.

At the onset, the film holds a lot of promise. A story of two gangs fighting each other to gain the top seat and full control of a make-believe city called Waji (basically Dubai), after big boss Roy (Jackie Shroff) is killed in a staged accident, the story slowly loses its plot with too many twists in the story.

The film begins with an elaborate bank robbery where the accused are not even aware that they have committed a crime. Much like us the audience, the baffled Mumbai police then hires its top officer Ashok Chakravarthy (Prabhas) to crack the case. Along with police officer Amrita (Shraddha Kapoor), Ashok has to first identify the thief, nab him and understand the bigger underworld nexus that is involved in the case.

High on style and action, the film's narrative is punctured ever so often with twists which stop exciting you after a point. The director barely gives the audience any time to grasp a plot twist before he introduces a new one- making the film a jumbled, convoluted story that has only one agenda- to make Prabhas look like a modern-day 'Baahubali' complete with charm, wit and of course brawn.

In the garb of making a stylised action thriller, the makers completely lose focus on logic and a coherent storyline. Sure, it's great to see slick action sequences, and refreshing to watch Prabhas in a contemporary character but the sheen wears off after a point of time. You want to be patient while watching this film, you indulge in the numerous twists to a point but the film completely loses its plot (literally) an hour before the climax.

The CGI is laughable- wish they had invested a little more in this department instead of pumping Rs 75 crore for one action sequence(the most expensive one in the world) and also paid more attention to the core story- 'Saaho' would then truly be an entertaining action thriller- a first of its kind in India. Instead, its a series of unexplained plot points, strewn loosely into a narrative. There are so many unanswered questions in the film. Why does the camera take so many shots of the women's waist? How do Prabhas and Shraddha fall in love? Why does Prabhas, with a very strong southern accent break into Punjabi rap in the middle of a dessert? Why does he have to be shirtless while skydiving? Why are there giants from beyond the wall from 'Game Of Thrones' after Prabhas' life? Why are they dressed in fur in the middle of the desert and using primitive tools when several bazookas are lying around? Why didn't the writer think this through?

Chunky Panday tries to be the cold-hearted villain and succeeds to an extent, Mandira Bedi shows off her handloom saree collection, Mahesh Majrekar is there too - as the bad guy but I'm not sure who he is exactly. Then there's Neil Nitin Mukesh who gives an earnest performance in a limited role. Most actors are there to just fill up the supporting roles, but they don't have much to do. Its a Prabhas show all the way.

Leading lady Shraddha Kapoor is given a few stunts to perform but ultimately is left as a pawn in the bigger game. She tries to act tough, fumbles ever so often and is ultimately saved by our hero every time.

There are some songs thrown in between to break the monotony of the narrative but most are forgettable.

'Saaho' is ultimately a giant mess of 'Baahubali' scale. Skip this one. If you still want to watch it, I suggest keep the bottle of aspirin handy.