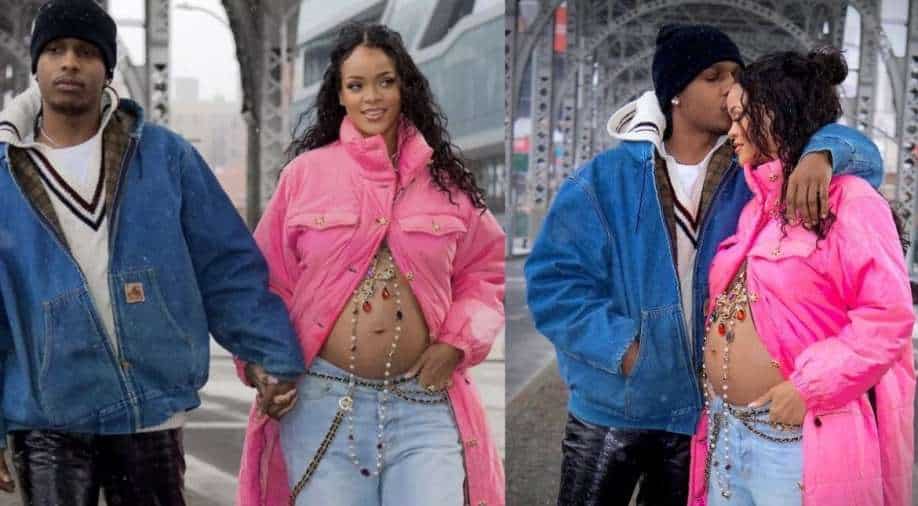 Rihanna showed off her growing baby bump in a new Instagram post on Thursday. This was the first time that the Grammy award-winning singer flaunted her baby bump ever since she and her beau A$AP Rocky confirmed that they were expecting their first child together.

In RiRi's latest post, she can be seen wearing the outfit she wore when she stepped out in New York on January 25 to grab dinner for A$AP who was working in the recording studio.

In the photo, Rihanna can be seen lifting up a football jersey to reveal her growing belly, letting her long, curly hair cascade over her shoulders as she lovingly stares at her bump. She can also be seen wearing long leather gloves.
The singer captioned the image, along with photos from her and A$AP Rocky's pregnancy announcement earlier this week, "how the gang pulled up to black history month."

On Monday, the fashion mogul and her rapper boyfriend announced their pregnancy when they were photographed out and about in New York City. The couple has been dating since November 2020.

Rihanna debuted her bump while wearing a bright pink jacket that was unbuttoned at the bottom to show off her bump, which was adorned in a gold cross and jewels.

"Having a baby is something she was never focused on, but being with Rocky opened her up to the idea. She couldn't be happier and is so excited to be a mom," a source close to the couple told People Magazine on Monday.