Review: 'And Just Like That,' it all went wrong 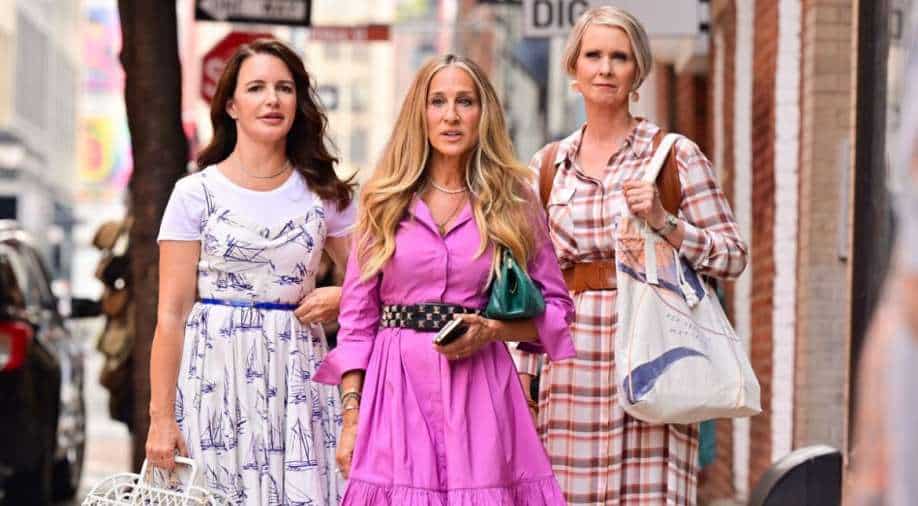 HBO's monumental passion-and-fashion comedy 'Sex and the City' was about getting — getting success, getting rich, getting lucky — 'And Just Like That' is riddled with loss.

This review discusses plot points from the HBO Max limited series 'And Just Like That.'

Live long enough, and you accumulate losses. And although HBO’s monumental passion-and-fashion comedy “Sex and the City” was about getting — getting success, getting rich, getting lucky — “And Just Like That,” its later-life limited-series postscript, is riddled with loss.

There are small losses, such as the passing of Barneys (R.I.P.), the secular temple of sex columnist and style maven Carrie Bradshaw (Sarah Jessica Parker). There is the casting loss of Kim Cattrall, whose libidinous Samantha has been shuffled off to London. There are heartbreaking losses of people, both fictional and real-life.

But when you are continuing a series that from 1998 to 2004 kept its finger on — to keep this PG, I’ll say “the pulse” — of upscale Manhattan’s sexual and social mores, there is also the fatal danger of losing your touch.

And there you have “And Just Like That.” Its first four episodes (of 10) feel like two shows. One, which tries to grow with the women as they navigate their 50s and mortality, is a downer, but it takes risks and in moments is very good. The other, which tries to update its sassy turn-of-the-century sensibility for an era of diversity, is painful.

The two-episode premiere, streaming now on HBO Max, finds Carrie, Charlotte (Kristin Davis) and Miranda (Cynthia Nixon) still lunching after all these years. The city is still alluring. The sex is more peripheral.

Carrie is now the “cisgender woman” on a podcast whose younger co-hosts make her feel like a fuddy-duddy. For Charlotte, intimacy is when her husband, Harry (Evan Handler), pees while she’s on the phone in the bathroom. The only one getting it on in Miranda’s household is her teenage son, whose prophylactics she is finding on his bedroom floor.

“At least he’s using protection,” Charlotte offers. “Now that is seeing the condom as half-full,” Carrie answers. It’s a classic exchange; close your eyes, and it could be 1998 again.

“And Just Like That” gets a lot of early mileage out of nostalgia. (There’s also the bittersweetness of seeing Willie Garson, who died during production, return as Carrie’s best gay friend, Stanford Blatch, although his character seems to be written off in a rush at the end of the fourth episode.) The warm feelings are capped by the sight of Carrie at home with her shoe closet and her other true love, Big (Chris Noth).

But if you were expecting a frothy cocktail to take your mind off the world’s troubles, the premiere throws that drink in your face. <em>Here is your last warning if you care about spoilers</em>: Big dies of a heart attack after a workout, in Peloton’s most unfortunate product placement.

The second episode, set largely at Big’s funeral, is oddly paced and grim without quite managing catharsis. But at least it’s unexpected, in an era of TV revivals that pander to give their audiences more of what they already like. Maybe this could also be the funeral for “Sex and the City,” after six seasons and two movies, and the start of something new.

It is — a little. The original series was deft at unpacking emotional mess, and Parker brings Carrie new gravity as she deals with her unexpected anger, jealousy and sense of unmooring. The show’s tone changes to match; gone are the wry, punny voice-overs as Carrie gazes at her laptop and muses, “I couldn’t help but wonder …”

But much of the rest of the series relies on a kind of cultural time-travel comedy: What do you get if you reboot “Sex and the City” into the social and TV culture of 2021? Here, things get cringey, fast.

The original series was groundbreaking for its sexual frankness and complex female friendships. It was also, like much TV of its time, very straight and very white. The series finale of “Pose,” set in the late 1990s, points it out when Elektra (Dominique Jackson), the Black transgender matriarch of the ballroom scene, surveys a room of wannabe Carries downing cosmopolitans: “I refuse to let some TV show about white girls define how we eat, drink and gather as girlfriends.”

Zeitgeisty shows such as “Sex and the City” often get dinged for not “aging well.” But they’re not meant to; they’re fresh-cut pieces of sashimi. That’s an art with little margin for error, and too often, “And Just Like That” is already off by the time it hits the plate. (See also the unfortunate jokes describing the pandemic in the past tense.)

That said, it is trying. Certainly, it’s more enlightened and much better than the Birkin bag of luxury goods and orientalism that was “Sex and the City 2.” And even in today’s bigger TV universe, ensemble comedies about women in their mid-50s are not exactly common.

But if its makers, including returning executive producer Michael Patrick King, are concerned with the “Sex and the City” legacy, that’s already secure. You see it in a line of series about sexually and professionally empowered women, in female-friend quadrumvirates from “Girlfriends” to “Girls.”

Maybe a better way to get that old feeling back is by discovering a new show. “And Just Like That” may offer die-hard fans the closure that the movies didn’t — if it doesn’t bum them out. But as I finished my screeners and hunched over my own laptop, I couldn’t help but wonder: Was this really necessary?