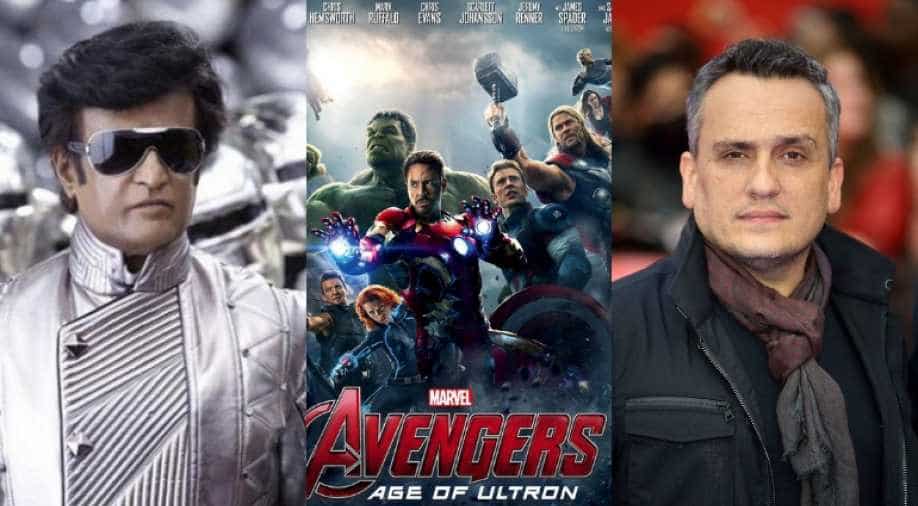 Joe Russo has revealed how a scene in 'Avengers: Age of Ultron' was directly inspired from Rajinikanth starre 'Robot' Photograph:( WION Web Team )

A scene in 'Avengers: Age Of Ultron' was directly taken from 'Robot' but evetually edited out, revealed Joe Russo.

Rajinikanth's influence is not just restricted to India alone. Filmmaker Joe Russo- one half of the Russo Brothers- the directors of 'Avengers: Endgame'- has revealed that how he was influenced Rajini's 2010 blockbuster 'Robot' and wanted to have a similar climax for the film 'Avengers: Age of Ultron'.

"'Robot' almost influenced the climatic moments in 'Avengers: Age of Ultron'... In one of the final scenes all the Ultrons were supposed to form a large Ultron and Avengers were set to fight that but the sequence got cut for time. It was this close. I was inspired directly by 'Robot'," said the director while addressing the press in Mumbai on Monday.

Russo is in India to promote his upcoming film 'Avengers: Endgame' which he co-directed with his brother Anthony Russo.

The filmmaker seemed to be quite impressed by Indian films and revealed how he is in talks with Priyanka Chopra for a project.

The 47-year-old filmmaker, who is known for giving Marvel Cinematic Universe (MCU) a grounded tone along with his brother Anthony Russo, finds Priyanka "fantastic" and would love to work with her.

"Priyanka is transitioning into global status now. She is fantastic... (I would) Love to work with her... I am potentially talking to Priyanka for something. I am not going to say what it is," Russo said in a group interview here.

Last year, Marvel Studios chief Kevin Feige had said that they are planning to make a standalone on superhero Ms Marvel aka Kamala Khan. After the news broke, many fans on social media expressed their desire to see Priyanka playing the character of Marvel's first Muslim superhero.

The filmmaker said as an action director, Indian films like 'Dabangg' series were an interesting watch for him.

"I'm an action director so I saw 'Dabangg' many years ago. I still have to see 'Dabangg 2'. I thought the camera work was great in those movies. The tone and energy is also great. So, I certainly know Salman Khan," he added.

Russo also said that how it was important to promote the film in India and Marvel has a strong fan base in the country. "There was a recording of an Indian audience watching the 'Infinity War' and the moment Thor lands, the cheers sounded like a football stadium. We used to play that recording whenever we would get tired (working) on 'Endgame' because it took us two years to make that movie.

"We would just play that recording and get reinspired.This response from the audience is why we make these movies. We know there is an excited fanbase here."

Russo added that if Marvel planned to introduce an Indian superhero, he would bat for a Bollywood star to play the part. "I will pick Bollywood stars to play Indian superheroes. I think moving forward, you are going to see a really diverse Marvel universe. It is really important for all the audiences around the world because these movies are so global. They should be able to identify with a character on the screen. I think you are going to see that really soon," the filmmaker said.

The film will release in India in English, Hindi, Tamil and Telugu, with a special theme song composed by music maestro AR Rahman.