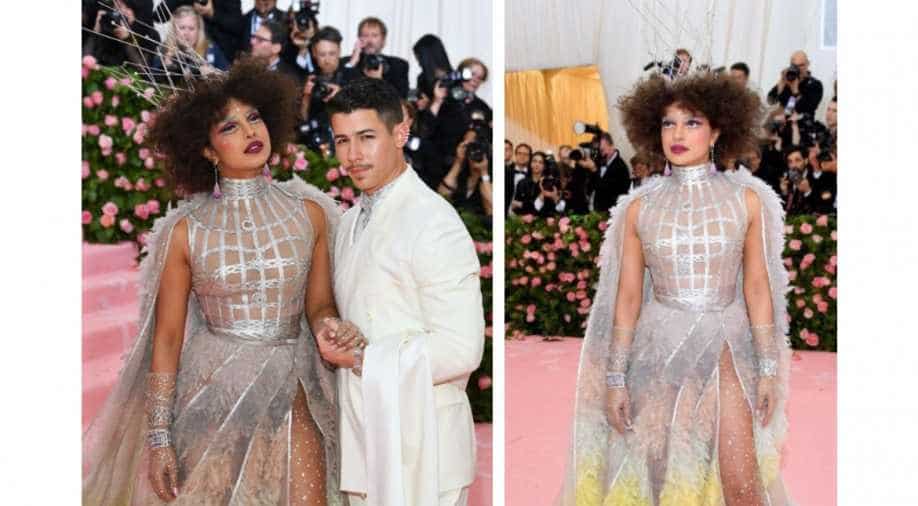 Met Gala is the same place where she debuted with Nick Jonas, her now husband. Priyanka was the talk of the town in 2017 as she came in a Ralph Lauren extraordinarily long trench coat.

Priyanka Chopra is a true fashionista and has proved to us time and again that she knows the rules of fashion. At the Met Gala 2019, Priyanka turned up in a shiny silver ensemble with a hugging corset that has a flowy structure below-the-waist and a dash of colour with plumes attached to the skirt.

She obviously had her eye-candy by her side, husband Nick Jonas who complimented her look with an off-white suit/ cream suit and silvers studs. The couple served us some major looks courtesy the theme of the event, ‘camp’.

Priyanka completed the look with silver-frosted brows and lashes, raspberry eyeshadow and lips, African hair, silver cage crown and matching silver polka-dotted hosiery. Her look had a fairy-godmother vibe. Another star who stole the show was Lady Gaga who changed into 4 outfits at the pink carpet, all in front of the snapping cameras.

Priyanka and Nick were first seen at the Met Gala in 2017 when they came together and sparked dating rumours which they obviously denied back then and ended up getting married in 2018. The two tied the knot in a lavish style in India over the course of a couple of days.

The couple has recently been in news for their outings and songs. Nick who was part of the Jonas Brothers made a reunion with his brothers and released a new single ‘Sucker’ that became Billboard Hot 100 no. 1. It featured the brothers with their respective partners.