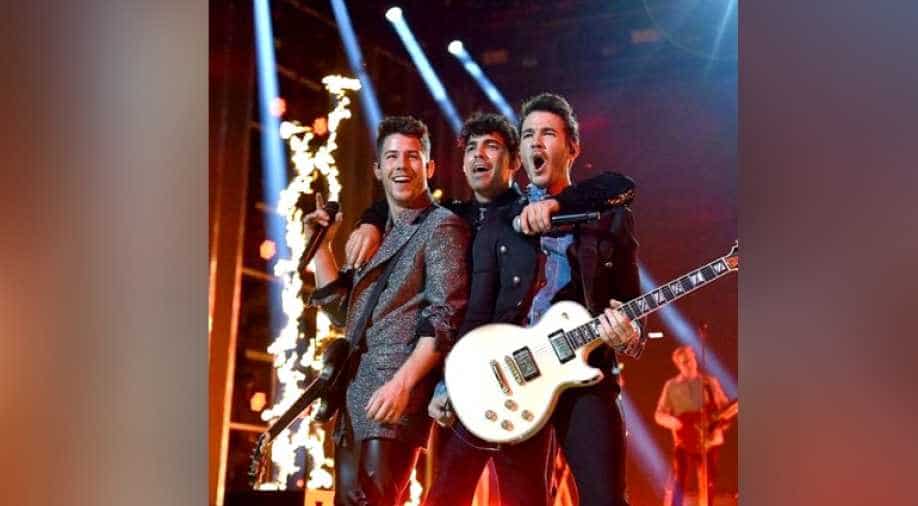 On Wednesday night, Nick kicked off the performance with his hit song 'Jealous' before Joe joined him on stage. The two then sang Joe's band's DNCE’s hit number 'Cake by the Ocean.'

The Jonas Brothers set the stage on fire at the Billboard Music Awards 2019 on Wednesday in Las Vegas as they belted out hit numbers like 'Sucker', 'Jealous' and 'Cake By The Ocean' to a cheering crowd which also included their partners, Danielle Jonas, Sophie Turner and Priyanka Chopra.

The reunion was special as the last time the Jonas Brothers had performed at an awards night was back in 2009. They had disbanded in 2013. But as the three brothers - Kevin, Joe and Nick- came together a few months back for their smash hit 'Sucker, fans were overjoyed. The track topped multiple charts and made way for their second single 'Cool'. Also see: Jonas Brother's announce 'Happiness Begins' tour dates

We're burning up... a sucker for... and [insert any/all @jonasbrother's lyrics here] after that performance at the #BBMAs from the @Xfinity stage. 🔥🍭💯 pic.twitter.com/wll0gLemnw

On Wednesday night, Nick kicked off the performance with his hit song 'Jealous' before Joe joined him on stage. The two then sang Joe's band's DNCE’s hit number 'Cake by the Ocean.'

AHHH that was amazing! #BBMAs

The Jonai in Vegas. 😎

Nick, in the middle of the performance, even ran up to his wife Priyanka to share a kiss before the brothers reunited on stage to sing their newest single 'Sucker'.

In the audience, 'The J-Sisters', Sophie Turner, Chopra and Kevin's wife Danielle were seen dancing and singing along.

The 2019 BBMAs were hosted by Kelly Clarkson. The awards ceremony took place on Wednesday night from the MGM Grand Garden Arena in Las Vegas and aired on NBC.