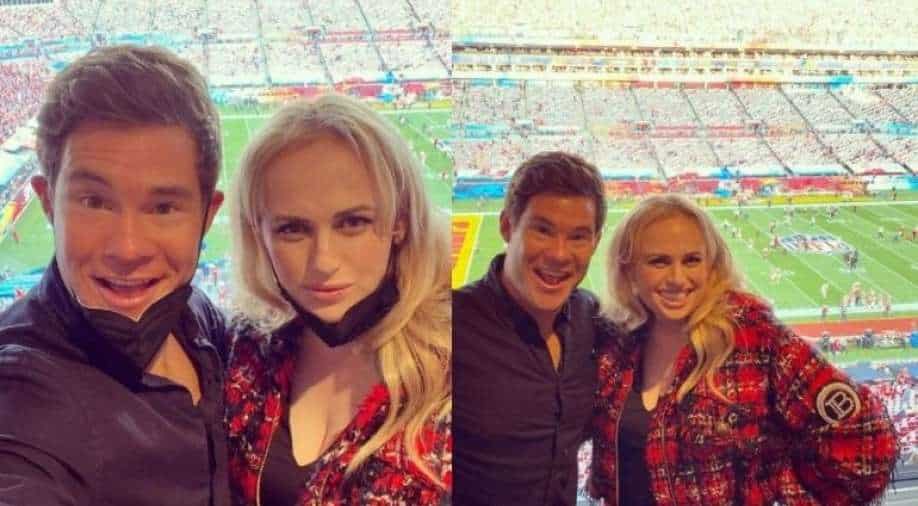 Rebel Wilson had a mini 'Pitch Perfect' reunion with Adam Devine at the Superbowl 2021. The actors were in Tampa, Florida with her friends for the big night full of sports and entertainment. The trip is just a week after the news broke that Wilson and boyfriend Jacob Busch had broken up.

Reportedly, Wilson travelled to Florida by private jet, and posted a photo from the game alongside her `Pitch Perfect` co-star Adam Devine."My favourite work husband @adamdevine," she captioned the photo.

She also shared a snap showing that she was enjoying a celebratory cigar. "Good morning Tampa! (Ps I clearly have zero idea how to smoke a cigar )," she wrote.

She then posted another photo posing with cheerleaders while wearing red. Page Six had earlier confirmed that the pair had called it quits over the last week. Wilson also said on social media that she would be single for the Super Bowl.


The star, who recently lost more than 60 pounds, and 29-year-old Busch started casually dating before the coronavirus pandemic hit.

As reported by Fox News, the duo made their red carpet debut in September 2020 at Prince Albert`s Planetary Health Gala in Monaco and posed alongside Kate Beckinsale and Helen Mirren.

The news of her breakup with Busch made its way online after Rebel Wilson hinted at her single status in a new photo shared on Instagram. She wrote, "Lots on my mind...aghhhhhh… #single girl heading to Super Bowl!"

In September, Rebel Wilson admitted spending 2019 meeting new people before ending up with Busch. She had then said, "Last year was the year of love, that's why maybe I'm still so obsessed with dating and stuff because I deliberately went out and I dated a lot of different people. And I wasn't very experienced in love and relationships, my movie Isn't It Romantic was pretty similar to my real life in that respect. And so I went out and just gave it my all, tried really hard to find love and stuff."