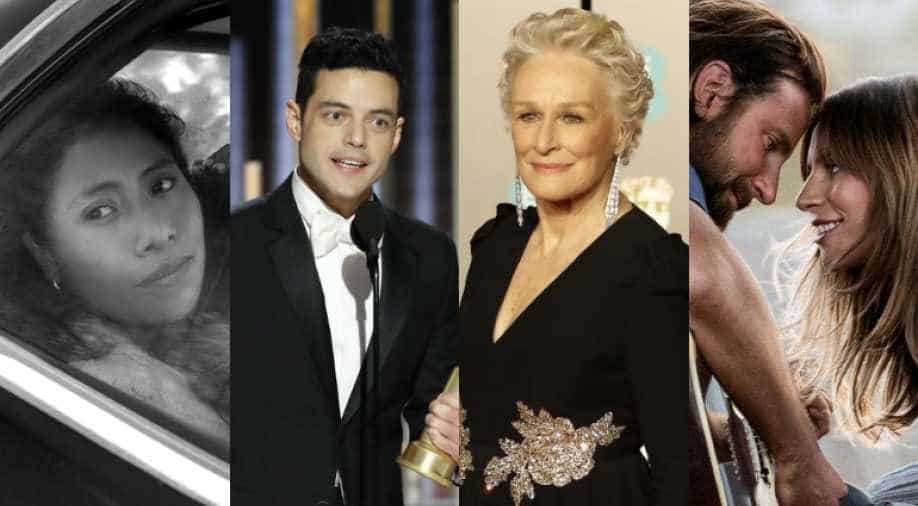 While it has sometimes seemed easy to guess the winners before the big night, this year looks to feature a few surprises Photograph:( WION Web Team )

Voting among some 7,900 Academy members ended Tuesday, so the die is cast. All will be revealed at the Dolby Theatre, in a ceremony beamed around the world to millions of showbiz fans.

The ballots are in, the red carpet gowns are chosen and the golden statuettes are being polished: Sunday is Oscars night, Hollywood's biggest gala of the year, and the end of a topsy-turvy awards season.

Can Alfonso Cuaron's 'Roma' be the first foreign language film, and the first Netflix feature, to win best picture? Can Glenn Close finally win her first Academy Award? And what will a host-free Oscars look like?

Voting among some 7,900 Academy members ended Tuesday, so the die is cast. All will be revealed at the Dolby Theatre, in a ceremony beamed around the world to millions of showbiz fans.

While it has sometimes seemed easy to guess the winners before the big night, this year looks to feature a few surprises, with the industry's other top awards going to a variety of films and performers.

'Roma,' Cuaron's cinematic ode to his childhood in Mexico City and the women who raised him, led the nominations with 10 overall, tied with offbeat royal romp 'The Favourite,' about Britain's tragic Queen Anne.

But civil rights dramedy 'Green Book' has overcome controversy to remain on the radar, and could benefit from the Academy's complex preferential voting system to snatch the top prize.

Superhero blockbuster 'Black Panther,' the first movie in its genre to score a best picture nomination, is also in the mix, as are Spike Lee's 'BlacKkKlansman,' Queen biopic 'Bohemian Rhapsody,' musical romance 'A Star Is Born' and Dick Cheney biopic 'Vice.'

For top acting honors, Christian Bale's transformation into the former US vice president for 'Vice' earned him a Golden Globe, a Bafta and a Critics' Choice Award.

But Rami Malek won respect from his peers -- and both a Globe and a Screen Actors Guild award -- for his spell-binding turn as late Queen frontman Freddie Mercury.

"In Christian Bale's, I see an incredible actorly thing, but with Rami Malek, you see a role that just really connected with audiences, and I wouldn't be surprised if the newcomer disrupts in this case."

The best actress race seems to be one of the only contests with a clear favorite.

Close, 71, has swept the prizes for her gripping work in 'The Wife' as a woman on the edge when her author husband wins the Nobel Prize in Literature.

Lady Gaga wowed fans and critics with her turn in 'A Star is Born' opposite Bradley Cooper, and Yalitza Aparicio's nomination for her first acting role in 'Roma' earned praise.

But it looks to be Close's night.

"It is not her strongest role, but it is an opportunity for her to really own a small film, to carry it on her shoulders, and to remind the industry that here is one of our real treasures as an actress," Debruge said.

One of the biggest questions ahead of Oscars night is: what will the show look like?

After Kevin Hart surrendered the host gig amid a backlash over past homophobic tweets, the Academy of Motion Picture Arts and Sciences opted to go without an emcee for the first time in 30 years.

It's a risky move -- the last time organisers went host-less, one of the most infamous moments in Oscars history was born: a song-and-dance number featuring actor Rob Lowe and... Snow White.

"They still don't have an answer to a question that's been around since the first TV showing in 1953: is this a presentation of every category, or is it entertainment?" Gray said. "They want it to be both."

The entertainment factor will be high when Queen opens the show with singer Adam Lambert fronting the iconic band.

Gaga and Cooper will lead the list of A-listers performing Oscar-nominated songs, along with rapper Kendrick Lamar, Jennifer Hudson and Bette Midler.

The Academy -- desperate to boost television ratings that have plummeted in recent years -- is trying to stick to a three-hour telecast, but it hit a few bumps along the way.

Controversies over its efforts to save time included plans to present a handful of awards during commercial breaks, and to feature only a few of the nominated songs. Both ideas have since been scrapped.

"The Academy's indecision in the past year has left people confused," Gray said.

The 91st Academy Awards take place Sunday at 5:00 pm (0100 GMT Monday). Will the changes made be enough to draw in viewers? Stay tuned.