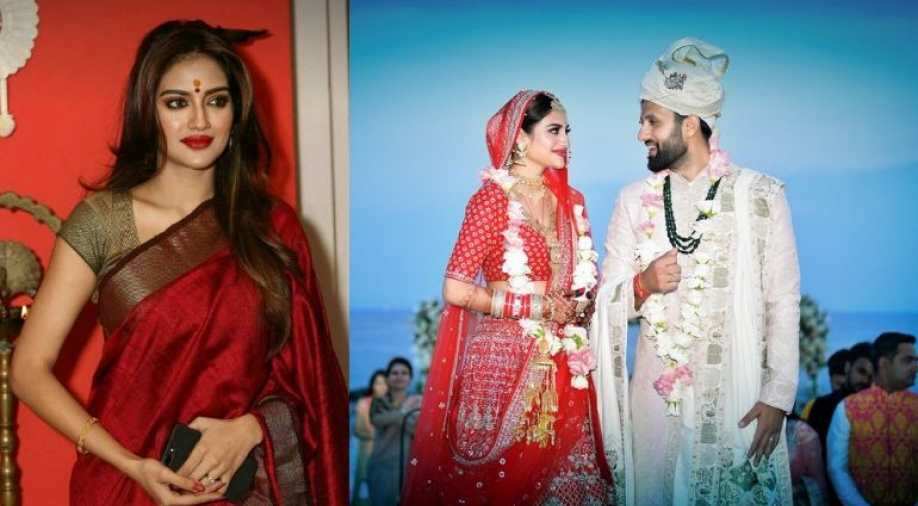 File image of Nusrat Jahan and a photo of her wedding that she shared on social media. Photograph:( Twitter )

Nusrat Jahan stated that her marriage to Nikhil Jain was not legal in the eyes of law in India and hence there was no question of divorcing him.

In 2019, Bengali actress and MP Nusrat Jahan's wedding photos went viral on the internet. She had just won the Lok Sabha election from Kolkata on a TMC ticket and then before taking oath as a member of the Parliament, had flown to Turkey to get married to beau, businessman Nikhil Jain. Photos of the dream-like wedding were shared on social media, which went viral in no time.

On Wednesday, amid rumours of divorce, Nusrat stated that her marriage to Nikhil Jain was not legal in the eyes of law in India and hence there was no question of divorcing him.

"Being on foreign land, as per Turkish Marriage Regulation, ceremony is invalid. It was an interfaith marriage, it requires validation under Special Marriage Act in India which didn't happen. As per court of Law, it's not marriage but relationship or live-in relationship," Nusrat, 31, said in a statement, reported news agency ANI. "Thus, the question of divorce does not arise."

Also see: Controversies are not new to actress-MP Nusrat Jahan

Commenting on Jahan's statement, Jain told reporters,  "I don't want to say anything. Everything will be decided by the court. The matter is in court."

Following a fairytale wedding in Turkey, the couple had hosted a grand wedding reception in Kolkata which was attended by several dignitaries including West Bengal Chief Minister Mamata Banerjee, and several Bengali film actors. See pics of the event here.

Nusrat has now deleted all photos of her husband from her Instagram page. Her wedding photos are also not there on the timeline.

Rumours of their separation started doing the rounds late last year, when Nusrat was linked to actor and BJP candidate Yash Dasgupta. The two have so far not confirmed or denied their relationship.

Nusrat's statement came amid speculations of a rift in her marriage and reports that she is living separately and is pregnant.

"My visit to any place for business or for the purpose of leisure, should not concern anyone with whom I have separated. All my expenses have always been borne by me contrary to claims by 'someone'," she further said in the statement.

Nusrat and Nikhil, are reportedly living separately since November 2020.