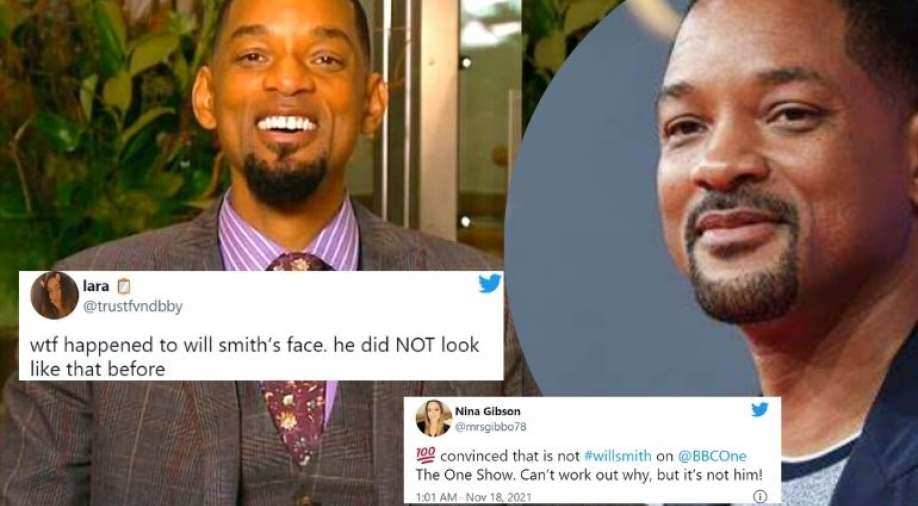 Will Smith appeared to talk about his new movie 'King Richard', in which he plays Richard, the father and tennis coach of Serena and Venus Williams.

Will Smith's new look has shocked the internet.

Smith, recently appeared as a virtual guest on BBC's 'The One Show' to discuss his upcoming movie 'King Richard', but viewers were more focused on his new looks than his new project.

The 53-year-old actor appeared to talk about his new movie, in which he plays Richard, the father and tennis coach of Serena and Venus Williams. For the show, Smith wore a three-piece suit, a purple shirt, and a tie, but it wasn't his outfit that had viewers questioning, but his features. While, there was not much change in his appearance, but still fans were baffled about how he's looking so unrecognizable.

Some fans pointed at his beard as he no longer have a moustache, while others suggested he was just wearing a lot of makeup.

Reacting to his looks, one user wrote: ''What's up with Will Smith's face?'', as well as other said, ''Will Smith doesn't look like Will Smith''.

wtf happened to will smith’s face. he did NOT look like that before

One user pointed at Will's beard and wrote, ''Will Smith on BBC1 now… doesn’t look like Will Smith. It’s definitely him, like. But isn’t. Maybe it’s the goatee?.''

Maybe it's the goatee?

More shockingly another user said that it wasn't even Will Smith who had appeared on the show in the first place as she wrote: ''100% convinced that is not #willsmith on @BBCOne The One Show. Can’t work out why, but it’s not him!''

Will smith looks like a Pixar version of himself. Wtf. Had to get the program info up on the one show to make sure it was actually him. pic.twitter.com/oqcatnrGmQ

''Will smith looks like a Pixar version of himself. Wtf. Had to get the program info up on the one show to make sure it was actually him,” one viewer tweeted.

I'm watching thinking the same thing - I can't work it out. Is it the lack of moustache?

Some viewers even speculated that Smith had undergone surgery.“Will Smith has definitely done something to himself he looks so odd,” one fan speculated.

''He's had a tickle from the cosmetic surgeon’s scalpel!!!'' another wrote.

Has he new teeth?

''I'd ride Will smith like sea biscuit… but he's needin to stop with the cosmetic s–t…. Looking a bit stretched faced,'' a netizen wrote.