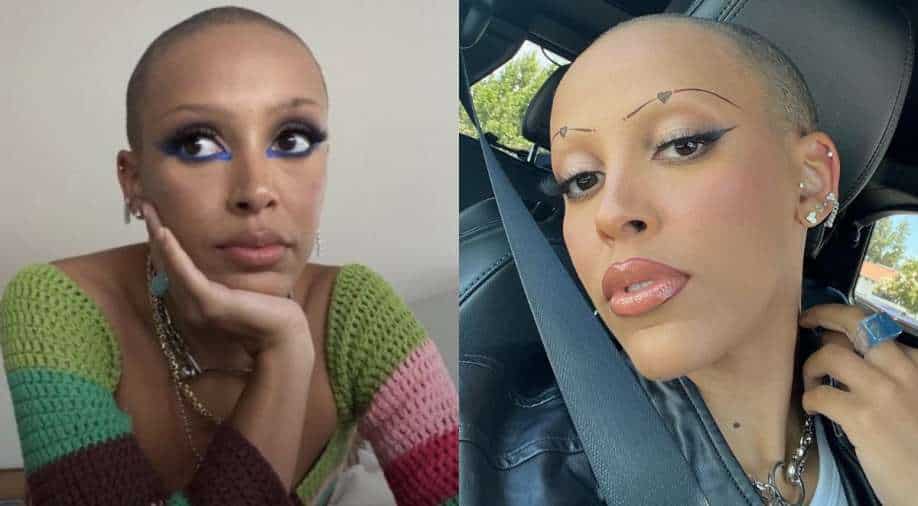 On Thursday, American rapper Doja Cat went live on Instagram and flaunted her new buzzcut and shaved eyebrows. Here's how netizens are reacting to her look!

Popular American rapper Doja Cat, who has given several chartbusters to the world of global music, is all about switching and changing her style. While for the most part of the year, she was sporting a bob haircut. Now, she is all about buzzcuts and shaved brows.

In the third week of July, she decided to get a pixie cut and turn into a blondie. But, within 3 weeks of her new cut, she decided to go completely bald. After making the bold decision to chop off all of her hair, including her brow hair, she went Live on Instagram and shared that she "never liked" having hair and finally decided to shave it all off.

Doja didn't seem regretful of her decision at all. Instead, she told her fans that she is "obsessed" with her new look and is "really liking" her appearance now.

"I just can't believe that it took me this long to be like, 'Shave your f**king head,'" she said. "I feel like I was never supposed to have hair anyway. I, like, don't like having hair. I never liked having hair. I cannot tell you one time, since the beginning of my life, that I've ever been like, 'This is cool.' I just do not like to have hair."

Meanwhile, some trolls have been targetting Doja for her shaved look. Many compared her to Britney Spears who shaved her head in 2007 and made headlines. One user wrote, "Doja cat pulled a Britney Spears. (sic)"

Another Twitterati wrote, "I refuse to believe doja cat shaved her head just because she doesn't like hair, it's something deeper than that she's probably going through something mentally because I've seen this before Britney Spears 2007 mental breakdown fiasco hello! #Doja. (sic)" And, one netizen said, "I feel like Doja Cat is gonna have a meltdown like Miley Cyrus and Britney Spears. (sic)"

Another fan wrote, "Not white folks calling Doja Cat shaving her head a 'Britney Spears era' Black women have been shaving our heads and rocking low cuts forever. Y'all associate women having short hair with mental illness and that shit is weird. (sic)"