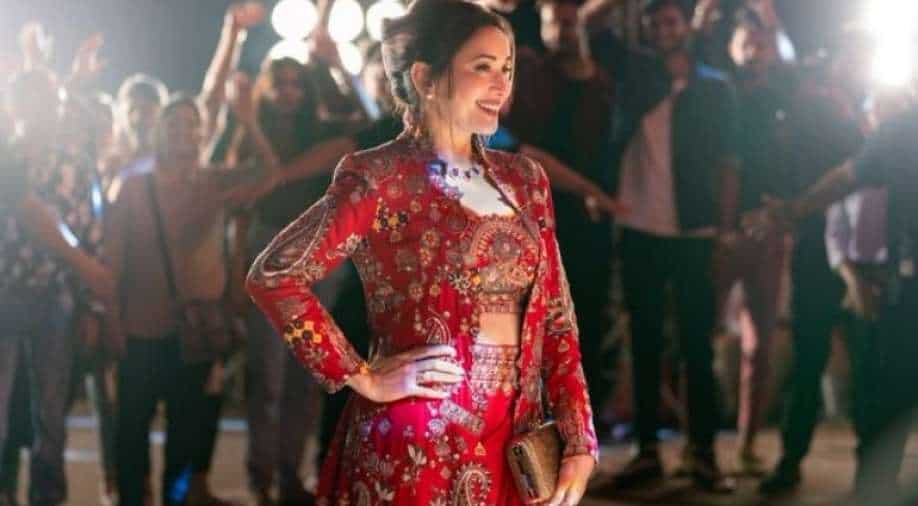 Madhuri Dixit in a still from 'Finding Anamika' Photograph:( Twitter )

A line up of 15 original series was announced at a virtual event on Wednesday, including shows headlined by Madhuri Dixit and Raveena Tandon- both of whom make their digital debut this year.

Netflix India released a long and exhaustive list of films and series that would premiere on the OTT platform in the coming months of 2021.

A line up of 15 original series was announced at a virtual event on Wednesday, including shows headlined by Madhuri Dixit and Raveena Tandon- both of whom make their digital debut this year.

Dixit, in her series debut, plays a global superstar, wife and mother in 'Finding Anamika'.

Directed by Karishma Kohli and Bejoy Nambiar and produced by Karan Johar's Dharmatic, the series revolves around Madhuri's character and what happens when she suddenly vanishes without a trace.

"'Aranyak' is an intriguing and mysterious story. I can't say much about that but my character is Kasturi Dogra and like many women, she is balancing her career and family. It is set in Himachal Pradesh. She wants to do well in her career but is held back sometimes due to other responsibilities," Tandon said in a virtual press conference.

Popular titles like 'Delhi Crime', 'Kota Factory', 'Jamtara' and 'She' are getting renewed for another season.

Here's a look at the other big releases that are lined up for release in the upcoming days.

'Decoupled', produced by Bombay Fables, Andolan Films and created by Manu Joseph, features R Madhavan and Surveen Chawla, is a comedy about a couple on the verge of a divorce.

'Feels Like Ishq' is an anthology of seven warm and breezy stories about the kindling of young love.

'Delhi Crime', Netflix's International Emmy-winning show, is returning with a second season. While the first season focused on the gangrape of a physiotherapy intern on December 16, 2012, the team tackles a new case in the follow-up chapter. Shefali Shah, Rasika Dugal, Adil Hussain and Rajesh Tailang are returning.

Imtiaz Ali's crime drama 'She' has also been renewed for a second season besides the return of 'Jamtara - Sabka Number Ayega', 'Mismatched' and 'Masaba Masaba'. 'Little Things' is returning for the fourth season. The streamer has also acquired 'Kota Factory' for a sophomore edition.
These shows are among the 40 plus titles that Netflix has announced under its 'See What's Next India' slate.

Netflix further unveiled true-crime documentaries that will be arriving on the service. These include docu-series 'Crime Stories: India Detectives' and 'House of Secrets: The Burari Deaths', a three-part docu-series that looks at the infamous Burari case, where 11 members of a family were found dead in their house. It is directed by Leena Yadav and Anubhav Chopra.

After the success of 'Wild Wild Country', Netflix is exploring a documentary on Ma Anand Sheela, late godman Osho's controversial ex-secretary and her return to India.

'Indian Predator' attempts to decode the minds of some of India's deadliest criminals.

'The Big Day Collection', a behind-the-scenes look at Indian weddings, is also returning, whereas a new series on social media influencers titled 'Social Currency' has been ordered.

In the comedy segment, popular comedian-actor Kapil Sharma will make his digital debut with a special. Shows from stand-up comics Sumukhi Suresh, Aakash Gupta, Rahul Dua and Prashasti Singh will also arrive on the streamer.