Neha Dhupia on life post-baby: The job better be worth my while to take me away from Mehr 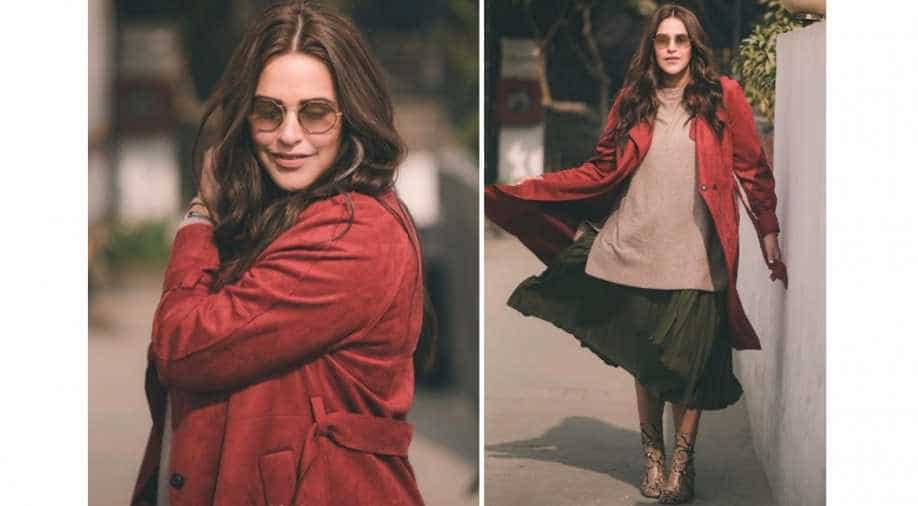 Kicking off auditions for the 16th season of MTV Roadies in Delhi, Neha Dhupia opened up on balancing time between her daughter, Mehr and work. She spoke about her equation with husband Angad Bedi, things that keep her busy apart from mommy duties and the next time we will get to see her on the big screen.

It’s not an everyday affair to see a crowd comprising hundreds of young people get together for an audition of a TV show. Growing bigger each year having maintained its charm throughout the run time since it was first aired in 2003, MTV India is back with the massively hit youth-based reality show ‘Roadies’.

Now in its 16th season, ‘Roadies’ kicked off its first series of auditions in the National Capital Region (NCR) as enthusiasts lined up to meet their favourite stars and try their luck on the adrenaline-charged show. Judges and gang leaders as they are called on the show -- actress Neha Dhupia, Nikhil Chinappa, former show winner Prince Narula, rapper Raftaar and former sportsman Sandeep Singh took the auditions.

The show this year has a new theme called Roadies Real Heroes that promises to awaken the hero within through real-life stories of courage, honour and bravery. On joining the team for the first time, Sandeep Singh, the sportsman on whose life Diljit Dosanjh starrer ‘Soorma’ was made said, “The concept of finding real-life heroes propelled me. All of us have the potential to rise beyond the ordinary and make a difference and that’s what I believe.”

Bollywood actress Neha Dhupia who happens to be the only woman gang leader on the show agreed with Singh and said that the show has kept itself relevant by offering what no other reality program does -- the tag of being a Roadie.

Joining a physically intensive TV show right after entering into motherhood, Neha Dhupia in a candid chat with WION opened up on balancing time between her daughter, Mehr and work. She spoke about what it means to be a woman, equation with husband Angad Bedi, things that keep her busy apart from mommy duties and the next time we will get to see her on the big screen.

Travelling with her newborn in this chilly winter of Delhi, Neha proves that not only is she the boss lady on the ground when she’s on the set of Roadies but a boss mother. “It’s one of those sayings, ‘I am every woman’ -- I am the mother, the professional, the one who stays up with her (newborn) every night. I look after myself, have to manage my house, have to be the wife, have to be the homemaker, everything. It’s just not me, everybody does it,” she said as she spoke about balancing important things in life.

While many would applaud her dedication to work even after having additional responsibilities of a newborn, for Neha it’s no big deal as she said that this is what means to be a woman. She explained, “The ones who actually want to, they go out there and do it. There are times like this morning when I was having my breakfast, getting my makeup done, putting my shoes on, replying to an email, feeding my child while somebody else was fixing my eyelashes. I remember I was doing six things at the same time. I was like ‘if I had an extra set of hands, I would do even more’ but it's not just me, every woman can.”

The 38-year-old actress has always been vocal about women-centric issues, so when asked if she was in any way breaking stereotypes attached to actresses after they get married and especially after becoming a mother, she said, “you should not let go of anything if you don’t want to.”

As a new mother who is learning-on-the-go, Neha said that everybody has their own style of dealing with things and that there is no fixed formula. She said, “The mother who decides to sit at home, the mother who decides to go to work; nobody is a bad parent. It’s not easier, not to say that the one who is sitting at home has it easier but I can tell you that my plate is full and a large chunk of it is occupied by Mehr but whatever is left of me, I am working on some sort of reserve battery.

Neha gave birth to Mehr in November 2018 after announcing her pregnancy over an Instagram post. The couple was then on a holiday at a fancy beachside location outside India. The baby announcement was quite a shocker for her fans who were still reeling under the news of her getting married in a private ceremony in the month of May of the same year.

With a partner who understands her and her needs, doesn’t sharing the responsibility of a baby become easier? Neha said that he (Angad) is co-parenting with her but it’s different for him. She explained, “For the first 40 days, I didn’t go to the gym but now I get up and do that. He fills in for his daddy duties but there’s very little that he can do. At the end of the day, I have to feed her, nurse her and that is something nobody else can do apart from the mother.”

She continued, “There are times when I just look at him and I’m like ‘can you somehow do this so I can sleep one night?’” and quickly added, “I feel that he shows immense patience, love and I wish you could meet him to know what a lovely, solid man he is. He makes for a rock solid husband and such a good father.”

The actor couple got married in a hush-hush ceremony in New Delhi in a Gurudwara, unlike other celebs who announce dates, throw lavish parties and call the entire Bollywood to celebrate. The world got to know about their marriage; only after good friend-filmmaker, Karan Johar shared a wedding photo of the duo on social media. Neha laughed as she answered if she thinks that they are both very private people in real lives: “We don’t like to make a big deal out of anything, that’s how we are going to raise our child. Even now when I go out to parties or when I step out socially, I’m not the kind of person who’ll take their phone out and show videos of my child although my phone is full of them. If I had to pick between private and not-so-private, we’re definitely a lot more private.”

She then narrated how when anytime someone visits their home, they wonder about Mehr’s whereabouts. She said, “It’s amazing. So many people have come to our house and they say we don’t even know there’s a child in the house here because even she’s chill. Literally, till you don’t say that she’s in the other room, you’ll never make out.”

With so much going on in her life -- marriage, a kid and so many projects that she has her hands full in, what made her say yes for more work and does she ever take a break? To this she said, “It’s funny you said that because I was giving birth to Mehr and she was born at 11:25, and I still have an email at about 10:15 or 10:30 which I am sending to my editor saying ‘I’m not happy with this edit’ because I was pushing something out for my #NoFilterNeha on Monday. Mehr was born on Sunday.”

Right after delivering the baby, Neha then responded back to the email at 12:30 saying ‘this is okay, the edit is good to go’ to which her chat group with fellow work team members exploded with questions like ‘are you for real?' asking her to take a bit easy on herself than she does.

From making her acting debut in a Malayalam film in 1994 as a child artist to her Hindi films, multiple modelling assignments, advertisements, music videos and TV shows -- Neha has been the favourite child of the camera. On her compulsiveness, she said, “My head is like a ticking bomb, it can explode but as long as it is ticking, it’s a good thing. It shouldn't go still for a minute because I feel if I rest, I’ll beat myself up. Some people are like that.”

Neha was last seen in Kajol’s film ‘Helicopter Eela’ that came out in 2018. Post that, the glamorous actress has been busy with getting us Bollywood gossip via her audio show #NoFilterNeha, a task that only a few industry insiders can boast of.

Here’s my ultimate Christmas present 🎁!! Laughter and madness with @karanjohar on the season finale of #nofilterneha season 3 only on @jiosaavn co produced by @wearebiggirl 🔥🤣❣️link in bio ☝️

On plans of coming back to films post having a baby, Neha revealed that she did get offered a good script but she couldn’t take it up because she had “dates issue”. She said, “My heart is still bleeding because of that as the feature films that I like are very few and far in between. When you get an offer, you want to make sure you have the dates but it didn’t work out this time. Next time when I get something that is as good, I will work around it” and quickly added, “Earlier I used to say that the job better be worth my while to get me out of bed, now the job better be worth my while to take me away from Mehr.”