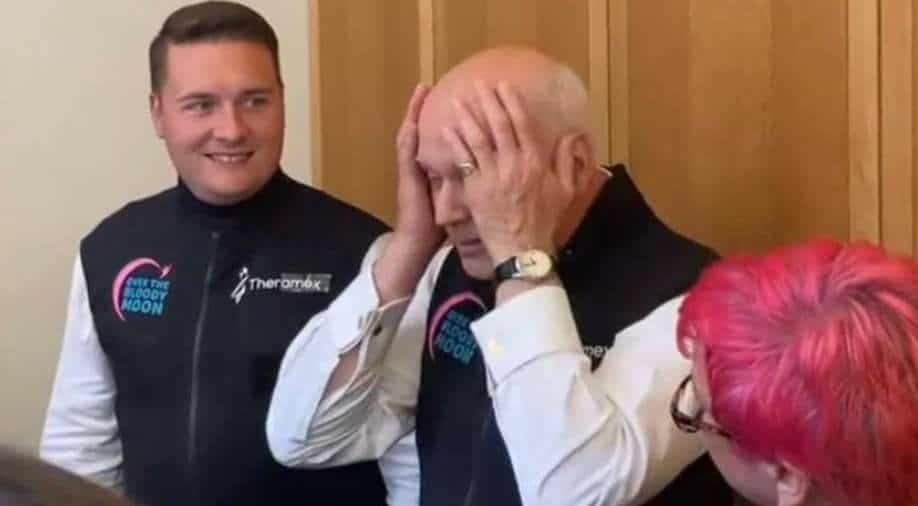 This special vest, which has been developed by a group called ‘Over the Bloody Moon’, boasts electric pads for recreating the heat women experience during menopause

Ever wondered what a woman goes through during menopause? Well, a male can hardly imagine the pain when it occurs. But not anymore as a new vest has been developed, which stimulates menopause hot flushes. In other words, this pad shows one of the most common and unpleasant symptoms of menopause. Yes, we are not kidding. It was recently tried by some male members of parliament (MPs) and their reactions were life-changing. Some MPs called it “volcanic” and “very uncomfortable”. It all happened during an event organised at Portcullis House in Westminster on Tuesday to raise awareness about the acute shortages of hormone replacement therapy (HRT) products in the UK.

Also Read: One in 10 women left job due to menopausal symptoms in UK, finds survey

After trying on the vest, Streeting, said, “It’s deeply unpleasant and an enveloping heat. How you would crack on with life I don’t know. I can’t wait to take this off.”

Kinnock said it as “a very intense kind of heat and an internal feeling, not like being warmed by the sun, but almost volcanic inside”.

The magnificent @carolynharris24 gives male MPs a chance to feel a hot flush with the MenoVest. Thanks to Ian Duncan Smith and @SKinnock MP for being #maleallies in the menopause 🤪💪 pic.twitter.com/cWLX10d8a3

“I’m feeling this on my back now. Imagine making a speech in the House of Commons and suddenly getting a hot flush. If [men] had this, we’d be complaining a lot,” said former Conservative party leader Iain Duncan Smith, after putting the vest on.

“If you pass out, we’ve got water. Welcome to my world. I don’t need the vest to be hot and bothered,” said MP Carolyn Harris.

What is this vest, actually?

This special vest, which has been developed by a group called ‘Over the Bloody Moon’, boasts electric pads for recreating the heat women experience during menopause.

“Hot flushes are one of top three symptoms that impact on the lives of menopausal women – disrupting sleep, increasing levels of anxiety and often affecting women’s performance at work. For those who haven’t experienced the feeling, it is easy to underestimate its intensity and fail to appreciate just what an impact it has on daily life,” said Lesley Salem, founder, Over the Bloody Moon.