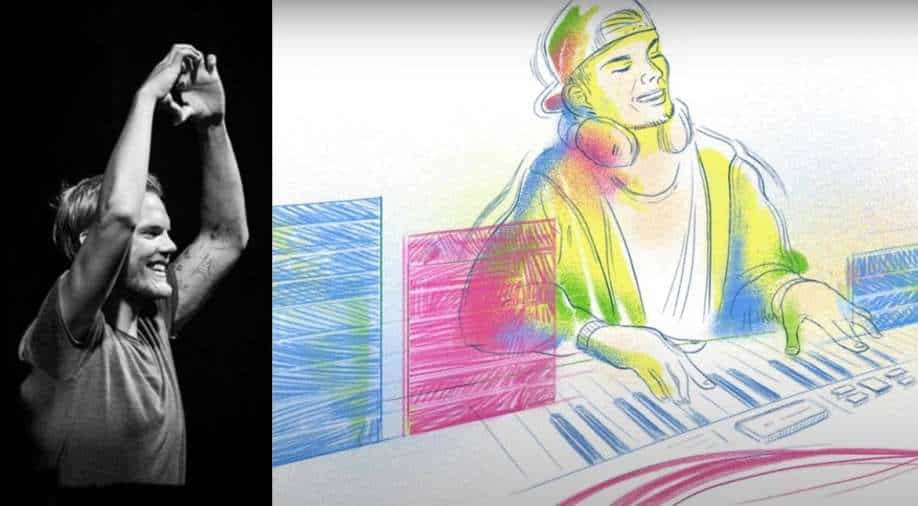 Avicii from one of his concerts; (L) Screengrab from Google Doodle's birthday dedication video Photograph:( Instagram )

Avicii's last album, who died on April 20 of 2018, was released almost a year after his untimely death in Oman. It was titled 'SOS'.

On Tuesday, Google Doodle honoured the life and legacy of Swedish Tim Bergling--who went by the moniker Avicii--to mark what would have been the 32nd birthday of the celebrity DJ from Sweden.

Google Doodle has made an animated version of the late  DJ's most celebrated track till date, 'Wake Me Up'. The special video has reportedly been created by artists Alyssa Winans, Olivia When, and Sophie Diao.

Interestingly, Aloe Blacc, the same singer who had lent his voice for Avicii’s smash hit 'Wake Me Up', has sung 'SOS' because of the personal notes recovered after his passing.

Also read: Kangana Ranaut: It is not fair to say I will win the National Award for 'Thalaivii'

Reportedly, Avicii had written that he wanted to work with Blacc again and so his production team invited him to record the recently released single.

Blacc had then said in his statement, "I feel like it was a song that was probably ahead of its time for when he wrote it. He wrote these lyrics obviously about some of his battles and I think it’s a really important topic to approach and to share, especially with his visibility and his access to ears and hearts. To give people the words to be able to say ‘I need help’."