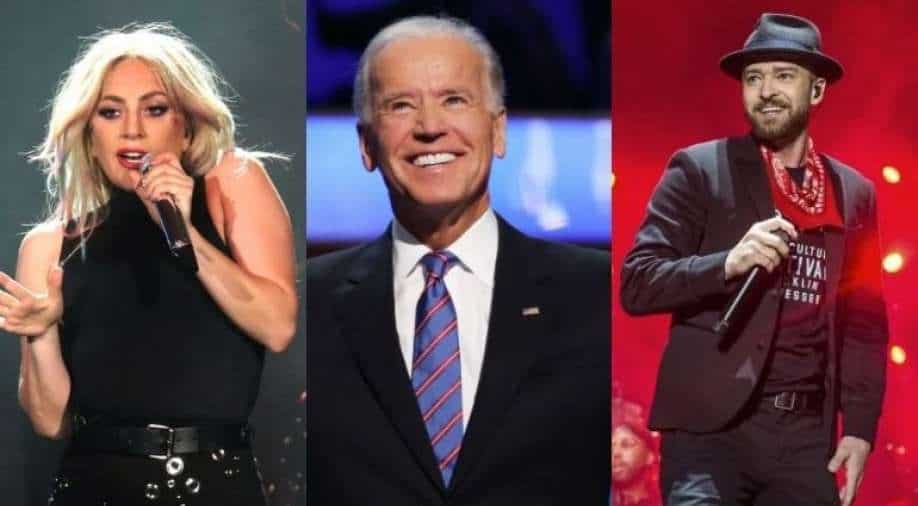 As America gears to welcome its 46th President, Joe Biden with a glittering ceremony, several stars will be part of the inaugural ceremony on Wednesday. A bevvy of stars of all stripes is set to participate in the inauguration of President-elect Joe Biden and Vice President-elect Kamala Harris including Jennifer Lopez, Lady Gaga and Tom Hanks.

The event will see actors, musician and even TikTok stars participated in a long day of virtual programming.

The virtual event titled 'Celebrating America' will be hosted by legendary actor Tom Hanks and will witness performances from some of the leading artists of America.

Here's a full list of celebrities who will feature in Joe Biden-Kamala Harris' inaugural ceremony.

Lady Gaga- The 'Shallow' star will be singing the US National Anthem.

I pray tomorrow will be a day of peace for all Americans. A day for love, not hatred. A day for acceptance not fear. A day for dreaming of our future joy as a country. A dream that is non-violent, a dream that provides safety for our souls. Love, from the Capitol 🇺🇸 pic.twitter.com/fATHiJHCq0

Amanda Gorman- Gorman, the first US youth poet laureate, will be reading out one of her poems at the event.

Garth Brooks- The singer joked that he would be 'the only Republican' attending the ceremony. Brooks added that his performance would serve as a "statement of unity".

Tonight, join myself and @Lin_Manuel for the Latino Inaugural 2021. You can tune in at 9:30pm ET here https://t.co/JgGmGvPX6j. I hope you can join ❤️ pic.twitter.com/4S8gUOxSdm

Kerry Washington- Washington too, will be presenting certain segments along with Longoria.

The first, but not the last.💕

A historic Inauguration day is upon us. Let’s celebrate the women, like Vice President Kamala Harris (will never get sick of saying that!!!!!!😍), who by their example and by their service, open the door wider for women everywhere. pic.twitter.com/kXqbnkfgcN

Announced today, Foo Fighters will be joining the inauguration celebration for @JoeBiden and @KamalaHarris. Tune in January 20th at 8:30pm ET. For more details on the event visit: https://t.co/U3JizoSGDC #Inauguration2021 pic.twitter.com/CsAMDx2jSB

John Legend- A vocal supporter of the Democrats, the musician will be performing at the opening ceremony.

Join me on January 20 at 8:30pm ET to celebrate the historic inauguration of @JoeBiden and @KamalaHarris! #Inauguration2021 https://t.co/FaTgnKcyEe pic.twitter.com/uF1VU6vqfC

Bruce Springsteen- Another Democrat support and a staunch Trump critic, Springsteen will be performing at the event.

Bruce will join our next President and Vice President @JoeBiden and @KamalaHarris for #Inauguration2021! Tune in Wednesday January 20 at 8:30pm ET for a night that celebrates our country's rich diversity and resilience. https://t.co/KbTpyEUkT3

Demi Lovato-  Lovato is likely to perform at the event.

I’m SO honored to announce that I will be joining @JoeBiden & @KamalaHarris for their special event, “Celebrating America” on January 20th at 8:30pm ET/PT ❤️🤍💙 I was left speechless when I was asked to perform! Tune in with various tv networks & live streaming services 🇺🇸 pic.twitter.com/YiYmQ43M51

A few months ago @AntClemons and I wrote BETTER DAYS. This song was our way of doing what little we could to encourage everyone to stay hopeful and to keep working towards a better future. I’m honored to announce we’ll be performing it for the Inauguration. pic.twitter.com/aes5gXdEww

I am very honored to be part of the Presidential Inauguration tomorrow alongside so many incredible people. Tune in at 8:30pm as we ring in the new Administration of @JoeBiden and @KamalaHarris. #Inauguration2021 pic.twitter.com/9RvANRYuEe

Kareem Abdul-Jabbar- Lakers legend will be part of the ceremony.

Tim McGraw and Tyler Hubbard- The country musicians will be performing their new duet, 'Undivided'.

Black Pumas- Yep, they are performing as well.

Tony Goldwyn- Onscreen POTUS, Goldwyn will emcee Wednesday’s “Parade Across America” as the University of Delaware and Howard University drumlines escort Biden and Harris from 15th Street to the White House.

Jon Stewart- The Late Night Show host will be part of the parade.

New Radicals- The new rock band will be there at Biden's inaugural ceremony.

Andra Day - Singer Day will rise up to the task of performing during the parade, along with figure skater Kaitlyn Saunders.

Watch Andra Day perform at @BidenInaugural tonight for a night of celebrating #MLKDay. Tune in at 8pm ET to listen to inspiring artists, speakers and more: https://t.co/AUK8TsQi0k #Inauguration2021 pic.twitter.com/mdMWTg6hhB

Kenny Ortega-  Prolific director and choreographer Ortega will lead the 'Dance Across America' segment of the parade.

Katy Perry-  Katy Perry will be performing at Joe Biden’s primetime inauguration special, and she shared a 'patriotic' picture ahead of her performance.