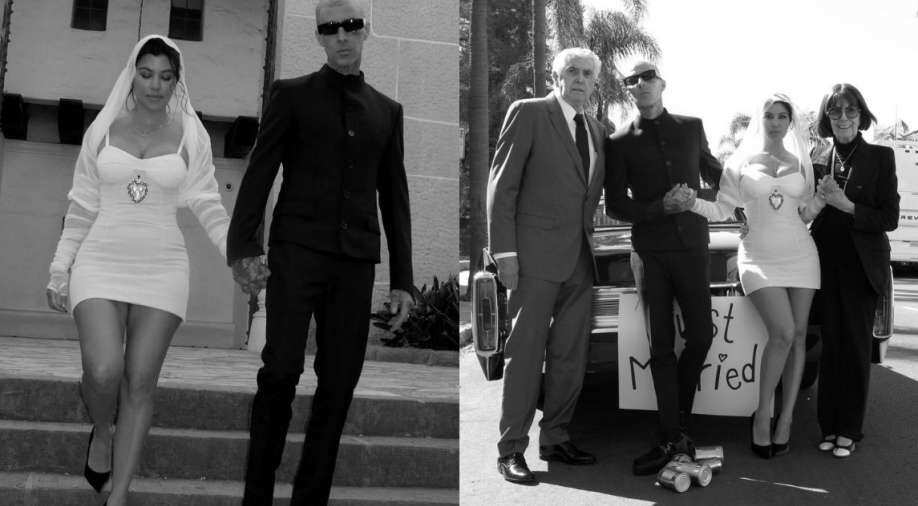 Kourtney Kardashian and Travis Barker have taken their vows as husband and wife. The newly-married couple has confirmed the same by sharing a series of monochrome pictures from their wedding day on their social media handles.

After tying the knot in Las Vegas without a wedding license last month, Reality TV star Kourtney Kardashian and rock drummer Travis Barker finally sealed the deal on Sunday in Santa Barbara and got hitched. Now, they are "legally" married to each other and are living their best lives as husband and wife.

With a few close friends and family members in attendance, the couple said their "I dos" at a courthouse in California on May 16. To confirm the news, both Travis and Kourtney shared synchronised posts on their Instagram handles with the caption, "Till death do us part."

The photos show Kourtney in her unconventional short white wedding dress and a beautiful veil. While her beau is seen flaunting his tattoos in a gothic black suit. The intimate monochrome photos took everyone's breath away as the lovebirds shelled major couple goals.

Kourtney, 43, and Travis, 46, got engaged in October 2021 in Montecito, California. On Kourtney's latest reality TV show 'The Kardashians’, fans saw Travis going down on one knee and proposing to his ladylove. After the adorable proposal, the Blink-182 drummer took the eldest Kardashian to a surprise dinner party where every close friend and family member of the couple was waiting. Seeing all the people who she cared for and loved, Kourtney smiled from ear to ear.

The couple has been trying to have a baby for quite some time now, as shown in the first season of 'The Kardashians'. Barker often makes an appearance on the Kardashian clan`s new reality show, which premiered in April.