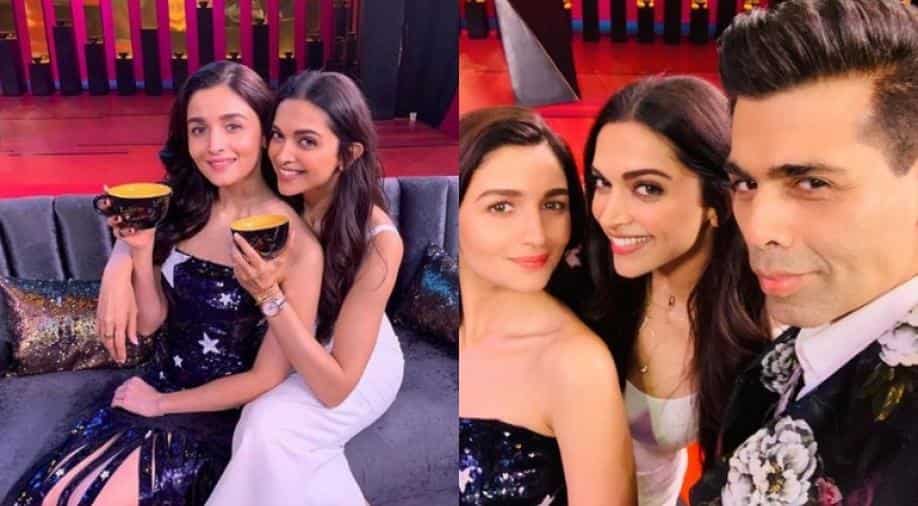 The episode, in a nutshell, could be called a fantasy that Johar played out on national TV. It was not for our entertainment purpose but solely for his own.

Another year, another season of 'Koffee With Karan' is upon us. The sixth season premiered on Sunday with Alia Bhatt and Deepika Padukone appearing on the first episode of the show. And apart from the set and a tagline that says 'Stop Making Sense', the show had nothing new to offer. In fact, Johar and co seem to have taken the tagline a bit too seriously because, during the hour-long show, only a few things made sense.

Let's admit it, when 'Koffee With Karan' first made its debut back in 2004, it literally served as a window to us viewers to the world of Bollywood. It was the only show that had Bollywood stars at their candid best especially because of the host, Karan Johar. It used to be a fun banter seeing A-list stars comment on B-Town relationships, speak about their peers and their personal dynamics on national television with their guards down.

That was in 2004, a time when social media boom was yet to hit India, a time when stars were still inaccessible to the general public. More than a decade later, with Instagram, Twitter, and Facebook becoming a common feature in every part of the country, a lot has changed except for Johar's show. Johar continues to demean actors by asking his guests to rank their sex appeal, acting talent and looks. The show continues to only call actors who are close to the host himself and they continue to discuss things that are irrelevant to the general public.

On the first episode, Johar began by congratulating Deepika and Alia on the success of 'Padmaavat' and 'Raazi'. But the conversation clearly steered towards the actresses personal lives as the host admitted he is 'not interested in your professional life'. The show went downhill from there with Deepika being constantly asked about what she felt about her ex Ranbir Kapoor dating Alia Bhatt now and when would she be getting married to her now boyfriend Ranveer Singh. Deepika being her diplomatic self, constantly gave practised answers without really divulging much details about her wedding(which she eventually confirmed herself on social media on Sunday afternoon), relationships or Ranbir Kapoor.

At one point Karan decided to decode a party that he had organised recently that had Ranbir and Ranveer in attendance. In his own words, he wanted to see the dynamics in the room that all the actors shared. What is this, a human experiment in KJo's land in the garb of a get-together? Who calls people over and then goes on to discuss their guests' personal dynamics on national television?

In a later segment, Johar made the two women identify actors based on pictures of their bare torso and even made them sing a song from his film which featured -no prizes for guessing- Ranbir Kapoor. The episode, in a nutshell, could be called a fantasy that Johar played out on national TV. It was not for our entertainment purpose but solely for his own.

Bollywood is undergoing sea change at this moment. The #MeToo movement has not only started a dialogue on sexual harassment at workplaces but also highlighted the predatory behaviour of some prominent names in the film industry. Yet, on Sunday, Johar spoke about the 'Most beautiful eyes' in Bollywood, a party that he had organised to understand the dynamics of two contemporary actors and selfies and pouts on social media. No mention of nepotism, no mention of the #MeToo movement, no mention of the films or other actors who have been making news in the country.

Instead, the same old questions on sex appeal, on relationships statuses, on what Deepika feels about her ex dating a new woman were asked on the show. Questions that Johar has been asking to his guests over a decade now. Which may have seemed interesting in 2004 but in 2018, with stars being accessible on social media, seem jaded.

Johar is an influential name in Bollywood. Because of the commercial successes of his films and his ability to show his versatility on various platforms, Johar enjoys a cult status like no other in this country. Which is why it is appalling to see him indulge in such mindless banter year after year which is repetitive and demeaning. Surely he can use this show to discuss pertinent issues. His guests are mostly his friends and no one can make them comment on issues as candidly as Johar can.

I don't want to know what kind of dynamics Ranbir and Ranveer shared at a party that Johar organised. I am not keen to know about Deepika and Alia's comfort level and if they took loo breaks together during concerts. Let's move beyond airport and gym looks and stop rating actors and their sex appeal.

It's 2018, there are pertinent things to talk about, good films and great talents to be lauded and Johar's dining room gossip is not fun anymore.

Why did so many Americans vote for Trump?