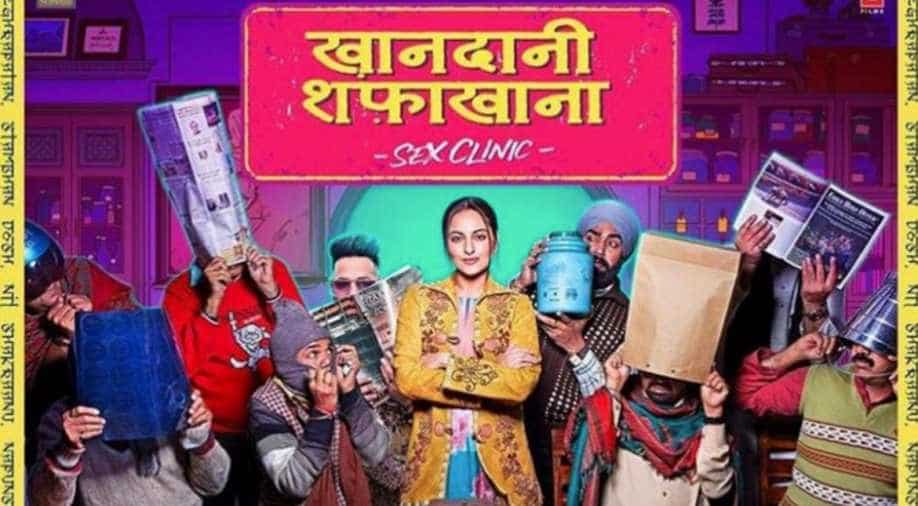 The film centres around Sonakshi Sinha's character and she doesn't disappoint as the feisty, go-getter Baby Bedi, Sinha Shines and delivers a commendable performance.

Baby Bedi, the protagonist in filmmaker Shilpi Dasgupta's film Khandaani Shafakhana has a gift. She can spot the ailment in a person by just looking at his face. A medical representative and the only earning member of her family, she had harboured dreams of becoming a doctor. But circumstances never allowed her and so she settled to selling drugs to doctors in Hoshiyarpur, Punjab.

Baby has many responsibilities. She runs a family, has a stay at home brother who thinks he is feminine (read feminist) and doesn't believe in working. She has a loan to repay and save her house from getting taken over. So when her estranged uncle, a sex doctor, leaves her his clinic to run, she takes it up not because she has any interest in his profession but to milk it for her convenience. The will though states she has to run the place for 6 months before she can sell it and so Baby sets on a journey where no one supports her unconventional practice.

In a small town of Punjab, as Baby takes over her uncle's practice and gives medicines to his regular customers, she faces opposition from everyone. She only has her brothers and a local Nimbu juice wala for support. But with limited funds, limited knowledge of medicines and patients who do not want to openly endorse her clinic, how long can Baby survive?

For starters, Khandaani Shafakhana should be given credit for bringing the topic of sex to mainstream cinema. Bollywood much like our society has always shied away from speaking openly about the subject. So it is refreshing to see writer Gautam Mehra take on the topic head-on and discuss it in a full-length feature film without being too preachy. So kudos for that. The makers also set the story in a small town- where discussing 'gupt rog' is still a hush-hush affair and where people still shy away from uttering the word publicly.

While the film is well-intended, the narrative, overall, doesn't match up to the extent it should. Sure its a comedy and has laughs in plenty but ever so often you would find yourself fidgeting in your seat as the pace slackens. The film takes a good hour to establish the main plot and at 150 minutes appears a bit too stretched as Baby is shown hustling and figuring out things.

The film also has a very clumsy climax which takes places inside a courtroom.  Of course, some bits are funny thanks to Annu Kapoor and Rajesh Sharma but we have seen better courtroom scenes in other films- this one doesn't add up.

The film centres around Sonakshi Sinha's character and she doesn't disappoint as the feisty, go-getter Baby Bedi, Sinha Shines and delivers a commendable performance. Varun Sharma as her brother Booshit gets some of the funniest lines and scenes and delivers an earnest performance. Newcomer Priyanshu Jora is charming as Sinha's love interest. Annu Kapoor, Rajesh Sharma and Kulbhushan Kharbanda make memorable cameos. Rapper Badshah makes a delightful debut as singer Gabru Ghatack- one of Bedi's celebrity clients. His character is meta in many ways but his comic timing is perfect and he delivers.

Does 'Khandaani Shafakhana' ultimately work? To a great extent it does, despite its stretched narrative. It may not be too as impactful as 'Vicky Donor' was (similar genre) but it still manages to get put a smile on your face and talk of something relevant at the same time.