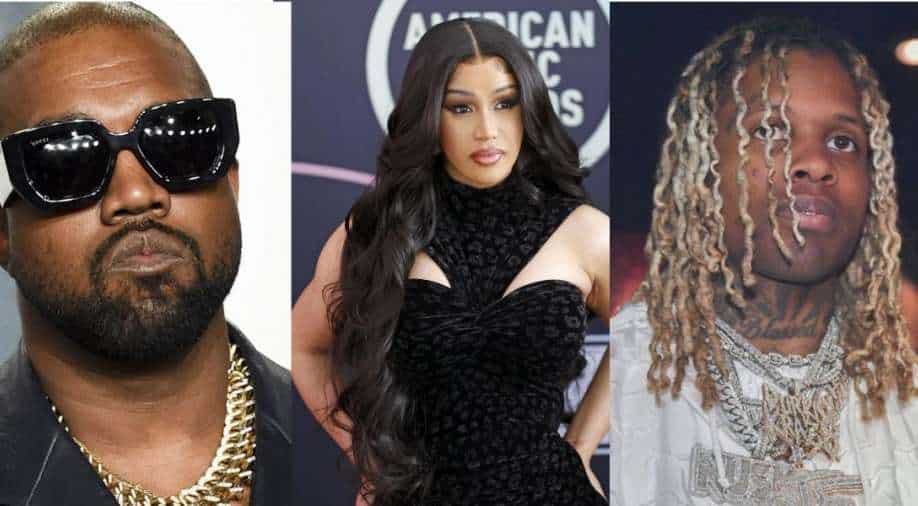 Kanye West, Cardi B and Lil Durk Photograph:( Others )

American rapper Cardi B has confirmed that her new single ‘Hot S***’ will include features from rappers Kanye West and Lil Durk.

American rapper Cardi B has confirmed that her new single ‘Hot S***’ will include features from rappers Kanye West and Lil Durk. Taking to Instagram, the 29-year-old rapper shared the news by posting a cover picture of herself alongside the names of the trio—Cardi B herself, Kanye West, and Lil Durk. The cover picture revealed Cardi B sprawled on a car’s back seat, covered in gold attire and pointy silver high heels, reported Variety.

The ‘WAP’ rapper sported a bob haircut, her peacock tattoo widely visible. Cardi B captioned "Holy S*** featuring Lil Durk & Kanye West" with three fire emojis. During an interaction held by Cardi B fans on Twitter Spaces, the rapper confessed that her solo song ‘Hot S***’ had not been released "for almost three years" and was much older than her popular track WAP.

Citing the reason for the delay, the rapper said that she was on the verge of ‘trashing the song’ because it did not accompany any music video. "I think this record is actually older than ‘WAP.’ It is everyone's favourite." said Cardi B, as reported by Variety. Talking about the record, Cardi B confirmed that the song was longer than three minutes and revealed that ‘the record is very masculine too.’

The rapper also showered praise on both West and Durk, calling their verses in the song excellent. ‘Hot S***’ comes in advance of Cardi’s long-awaited second full-length album, which follows her 2018 debut ‘Invasion of Privacy’, reported Variety. She, thereafter, has released a string of collaborations in the intervening years; with last year’s blockbuster tag team with Megan Thee Stallion, ‘WAP,’ and her most recent features, the drill track ‘Shake It’ (with Kay Flock, Dougie B, and Bory300) and the 2021 duet with Lizzo, ‘Rumors.’