Phoenix is known for his versatility and has always been able to camouflage into whichever character he plays on the screen. In 'Joker', he has outdone himself.

There is very little to laugh about in Todd Phillips 'Joker'. Almost nothing in the film, that focusses on a man whose business (at least in the initial part of the film) is to make people laugh, is amusing or entertaining. Instead, Phillips along with co-writer Scott Silver, engulf you in a dark, disturbing world of a mentally unwell person and glorifies it to a great extent.

Arthur Flex (Joaquin Phoenix ) lives in a dowdy flat with his ill mother and works for a company that provides clowns on rent. One look at Arthur and you would know he is not well. Bones sticking out, frail with a mental condition- Arthur needs help. But in a city like Gotham, where lawlessness and unhygienic living conditions have the authorities on their toes- no one has got the time to sit up and take notice of Arthur or his feeble mother. And as he loses his job, and is shunned by the society at large and even made fun of by his screen idol, chat show host and comedian Murray Franklin(Robert De Niro), Arthur unleashes mayhem on the city. 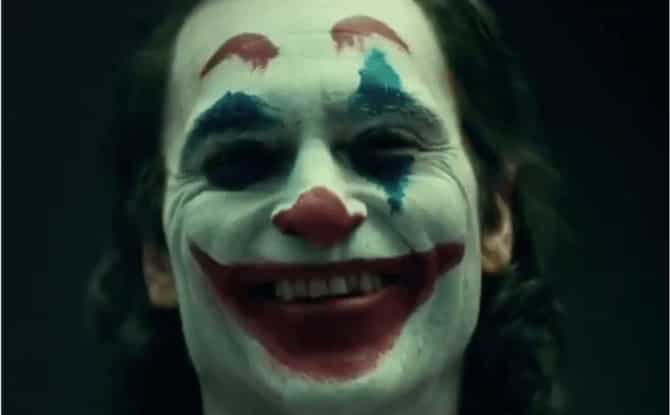 Shot impeccably by Lawrence Sher, the cinematography adds another level of texture to each of the scenes. There's gore, the frames are all dimly lit and Sher's camera shows light only sporadically when Arthur himself has stopped giving a damn about what others think. You can almost feel the stench that's around the city, or feel the wet cigarette that Arthur hastily takes a drag of- that's how vivid and detailed the camera work is.

The film is completely about Arthur. The makers never deviate or introduce a sub-plot (even though they hint at a possible romantic angle), and just keep the story completely straight forward about how the society has created its monster. The mental illness is just one of the justification given to why Arthur becomes the manic, murderous sociopath Joker. Phillips and Silver delve deeper into the world that we live in and question our lifestyle that creates lonely, insecure murderous men like Arthur. The writers also question anarchy, and in the most brazen way show us how society becomes when the gap between the rich and poor increases.

The film rests on Joaquin Phoenix, who despite a very lean frame, dominates every frame of 'Joker'. Phoenix is known for his versatility and has always been able to camouflage into whichever character he plays on the screen. In 'Joker', he has outdone himself. Every expression, the mannerisms, the way he delivers his dialogues, his out of tune dances- is impeccable. There is so much to absorb from his performance. The nervous, maniacal laughter can run a chill down the spine, the way he outrages on live TV makes you anxious about what's coming up next, how he dances down a flight of stairs makes you uncomfortable.

While Joker is a known character in pop culture, to bring some ingenuity to the character requires good writing and acting. You may get uncomfortable at the mayhem that Phoenix creates on-screen but you also feel sympathetic at his situation.

At one point, Arthur scribbles in his journal, "the worst part about having a mental illness is that people expect you to behave as though you don’t" but sadly the writers never delve deeper into it. Instead, they seem to regale at the uneasy environment the film creates with its narrative. Sure, it talks about how Arthur becomes the person he is now, but it never wants to give a solution. Instead, the film glorifies all the misdeeds that he does.

Some would argue that art doesn't need to always give a solution but showing a mental patient being gloriously celebrated on the big screen can have certain repercussions.

In 'Joker', Phoenix stuns with a stupefying performance but the story, with all its dark-Gotham,70's style glory, can leave you disturbed.

Princess Charlotte will be given ‘Duchess Of Edinburgh’ title after Queen Elizabeth: Report

Did 'The Simpsons' predict Elon Musk's Twitter takeover? Here's what we know