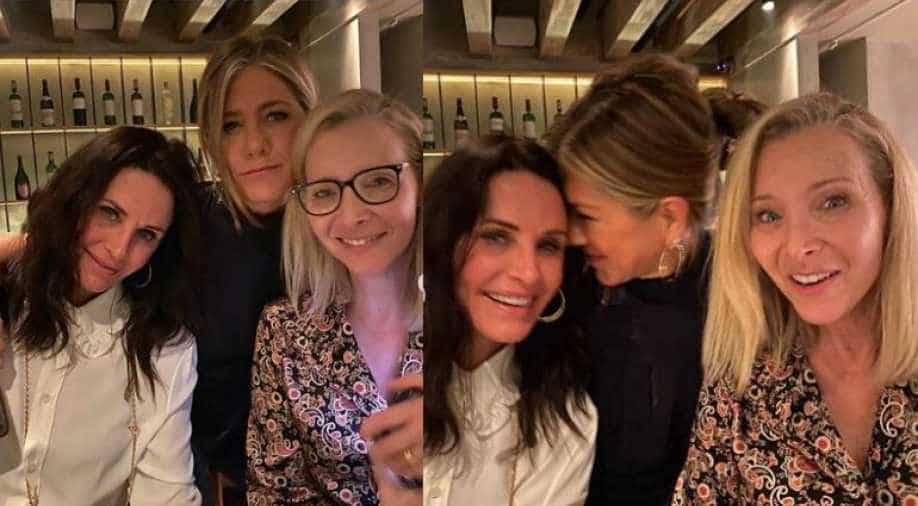 Actress Jennifer Aniston took to Instagram on Sunday to share photos of her night out with co-stars and best friends Courtney Cox and Lisa Kudrow.

Popular show 'Friends' may have ended years ago but we can never have enough of the series or its cast. The six leads continue to remain best of friends till date and are often seen spending time with each other.

Actress Jennifer Aniston took to Instagram on Sunday to share photos of her night out with co-stars and best friends Courtney Cox and Lisa Kudrow. The three actresses can be seen in smart casuals with minimal makeup.

Aniston's even had a 'Friends' reference in her caption. "Hi from the girls across the hall," she wrote referring to their characters who used to stay across Joey and Chandler's apartment in the series. Needless to say, her post was flooded with comments from fans in no time.

Hi from the girls across the hall 👋🏼

Even Lisa Kudrow shared two photos from their meet up. She captioned her post as, "Bliss. And more bliss #goodgirlfriends."

The three actresses are known to be close and often meet up and share photos of their reunions. Aniston, in fact, made her debut on Instagram in October 2019 with a selfie with her 'Friends'co-star. The post literally broke Instagram and fetched 15 million likes on the post.

Later, Aniston while appearing on Ellen Degeneres show admitted that a reunion was indeed on the cards. She did not divulge many details but if reports are to be believed the six actors are planning something special for an OTT platform.

Aamir Khan: 'Bhuvan in 'Lagaan' shouldn't have been clean-shaven, there was no water there'