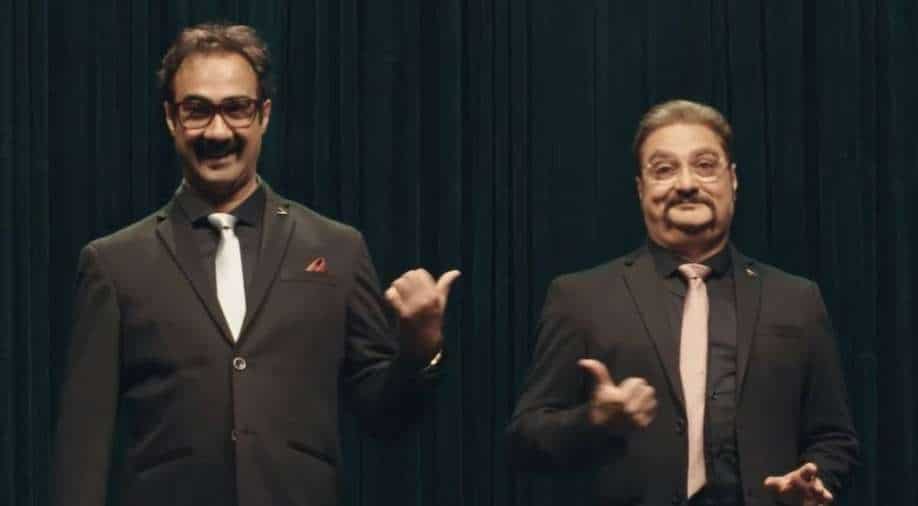 In conversation with WION, Gursimran Khamba and Amit Tandon talked about their vision for the comedy show Chalo Koi Baat Nahi, the need for it and how they are bringing alive Jaspal Bhatti’s ‘Flop Show’ in 2021.

‘Chalo Koi Baat Nahi’ is a new comedy show that promises to bring back the good old 90’s charm with a touch of modern sensibilities. Written and conceptualised by comedians Amit Tandon and Gursimran Khamba, the satirical show, they believe, will be relatable to people from all walks of life.

In conversation with WION, the two talked about their vision for the comedy show, the need for it and how they are bringing alive Jaspal Bhatti’s ‘Flop Show’ in 2021. Formatted as a six-episode show, Amit Tandon and Gursimran Khamba are bringing back the golden jodi of Ranvir Shorey and Vinay Pathak as hosts.

WION: How was ‘Chalo Koi Baat Nahi’ conceptualised? What is the format of the comedy show?

Gursimran Khamba: Amit sir and I are huge fans of satire shows of the early 90s. We felt that a lot of stuff we see on various platforms today is dark and heavy. We really wanted to do this family friendly, fun show, something we grew up watching. Chalo Koi Baat Nahi is a mix of sketch and standup. A nod to 90s comedy but upgraded with modern sensibilities. That’s the tone and humour of the show.

Amit Tandon: The show will have character-based sketches. Every episode will deal with one issue -- education, sports, weather and so on. In every episode, there will be 4 different sketches, so you can expect small stories with different characters each time. This has been put together by hosts Vinay and Ranvir. They will do standup and host in between sketches. What we have tried to do is bring a different vibe to every sketch -- songs, poems and proper storylines. None of the sketches are on stage but in different locations. Closest reference to Chalo Koi Baat Nahi is Jaspal Bhatti’s show.

Gursimran Khamba: As an example, one major song sequence is in a hospital episode where there are three schools of medicine trying to convince that their medicine is the best via Qawwali. The father is allopathy, mother is homeopathy while grandfather is ayurveda. The music is done by this young talent Youtuber Jaipdeep who I accidentally came across a couple of years ago. The best part of the show is that while you’ll see the most popular names that people are aware of, you’ll also get to know new talent.

WION: Was it a conscious decision to bring Vinay Pathak and Ranvir Shorey together like this after so many years?

Khamba: Amit sir and I always wanted sutradhars who we would be excited to work with and those that match the tone of the show. Chalo Koi Baat Nahi plays on nostalgia and Vinay and Ranvir are the perfect combination for this. We have not seen them together like this in 15 years. They fit the tone.

WION: Is the show a pandemic baby?

Amit: We have been speaking about ideas since 2019. We had a couple of formats in mind, but this worked the best.

Khamba: A lot of stuff on OTT  is heavy. While we thought about this before the pandemic, this is the best time to premiere it as the circumstances solidifies our belief in the need for such a show when these last two years have been super stressful for everyone. It makes sense for a show like this to come out at this time.

WION: What are your expectations from the show?

Amit: I just want people to watch the show and remember it the next day. That is my ideal reaction. Today there’s so many sources of fun, comic content. When you open your Whatsapp, you get atleast 50 new jokes everyday but how many do you remember when you wake up the next day? You just read and smile and forget about it. We wanted to create comedy that stays with you for longer than a day and people talk about it.

Khamba: We had a vision of what we wanted it to be but what we can control is how it turns out. It’s so rare that something translates from paper to screen without much changes. I feel we managed to do that.

I love silly stuff. I tried to give a certain sense of silliness. I’m giving away a joke so that you get a sense of it. So there’s a joke on hospitals with a guy who works there. He says ‘Aap humare world famous doctor Bajaj se operation karwa lijiye, aajkal ICU se zada news mein dikhaye dete hain’ (Get operated from our world famous doctor Bajaj, he’s more in the news than in the ICU). In my head it's damn funny, it's silly. If one or two people remember it and tell me, I'll be happy.

WION: Having been a standup comedian yourselves, how much do you think has the comic scene in India changed, in terms of content, audience tolerance and exposure in general?

Amit Tandon: Comedy in 2009/2010 was an elite format. Only people who had seen comedy in a club in New York or London would watch it. We had limited places in Delhi, Mumbai to perform. It was largely in English but slowly in the last five years, comedy has moved from being just an English format, limited to cosmo, to a format where stories are coming from every part of India. Now you will see comedians doing comedy which is going viral, not limited to English but Hindi-driven. They are not from Mumbai or Delhi but people who have grown up in Tier-1 and Tier-2 cities and they are bringing their stories. In 2009, selling five tickets was a job. In 2016, Zakir Khan sold 10000 tickets in one day. That’s where comedy has come. Talking of tolerance, it’s more about perception than what is happening on ground. People are saying what they want to say. In 11 years there has been one arrest of a comedian, so we can’t say there is zero tolerance. I don’t think it’s that bad.

Gursimran Khamba: It’s turned into an industry. When we started, we didn’t know what we were doing. We were mimicking the West, we hadn’t found our voice. A lot of comedians including me were just trying to be cool. If I was asked to do Chalo Koi Baat Nahi 10 years ago, I wouldn’t have done it because this is a family show and I was then this kid trying to be cool. I agree with Amit sir that there has been a welcome transformation -- we have more stories and from all parts of the country like there’s this guy in our writers' room who was telling us that his raddiwala would give him amrood (guava) in return for old newspapers. While we were stumped at hearing this, he said it as a matter of fact, like it was a part of his existence.

‘Chalo Koi Baat Nahi’ is set to release on August 20, 2021 and will stream on SonyLIV. The show, originally in Hindi, will be dubbed in 2 languages -- Tamil and Telugu.