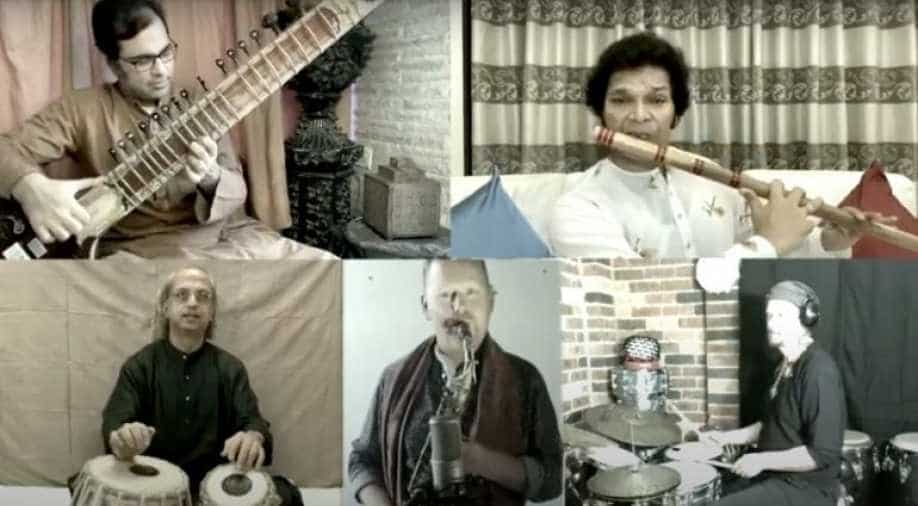 The Indian and Indian and Australian artists in 'the confluence of music' Photograph:( WION )

The new composition is inspired by Raag Desh, a traditional Indian melody and known for its signature pentatonic movement of notes.

Indian and Australian artists came together on the occasion of India's 74th Independence day to come up with a joint composition called 'Sur Sagar', the confluence of music.

It was conceptualised by tabla maestro, Pandit Yogesh Samsi from India and eminent percussionist, Chris Fields from Australia in association with the Swami Vivekananda Cultural Center, Consulate General of India, Sydney.

The 11 minutes 51-second confluence of music saw three Indian and three Australian artists. On the Indian side, it was  Pandit Rakesh chaurasia who is known as the ''flute icon of India'', Pandit Purbayan Chatterjee known as the country's ''finest sitar player'' and belongs to Senia Maihar Gharana, and Pandit Yogesh Samsi famous for his solo performances. Samsi has been trained by Legendary Ustad Allah Rakha.

Yogesh Shamsi speaking to WION said, "We have all come together in one voice in celebration of India's independence and basically to convey the message of love and brotherhood, the whole vibe"

Rakesh chaurasia added, "Music has its own language and no barriers and it can reach any corner of the world. Honoured, proud to be part of this project"

On the Australian side, it is its Chris Fields who is a third generation drummer, Michael Galeazzi who has over two decades of National and international touring and Stuart Vandergraaff, a saxophone specialist and proficient on nay (Arabic flute) family, Clarinet and other woodwinds.

Chris Fields speaking to WION from Australia said,"In this very difficult time for the world, the fact we were able to come together, it is testament to the universal language of music."

The collaboration was a virtual one given the fact COVID-19 has restricted movement. Asked about this virtual collaboration Stuart said," This new normal is opening up collaboration, the audience is getting broadening...in recent performances, I had audiences in India, Australia, Toronto. "

The new composition is inspired by Raag Desh, a traditional Indian melody and known for its signature pentatonic movement of notes. Raag Desh has ornamented various songs from India, including the national song of India, Vande Mataram.