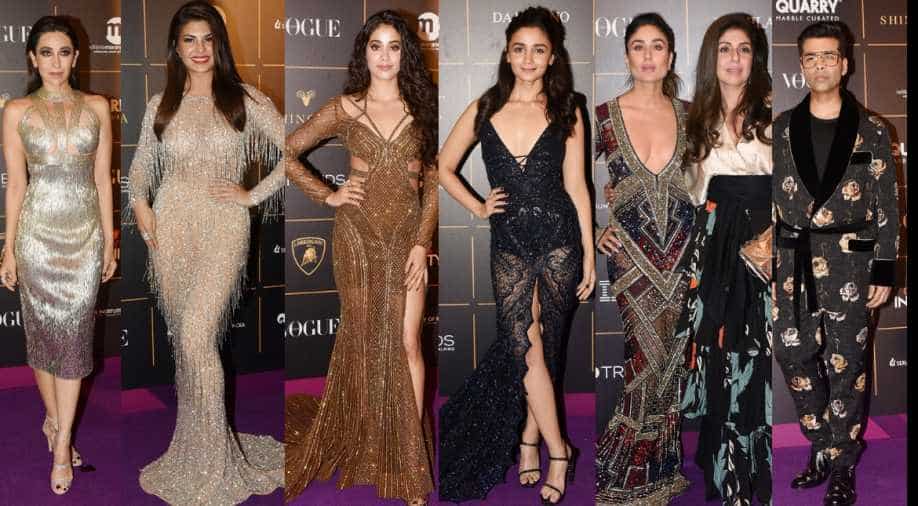 Stars shine at an awards night in Mumbai Photograph:( Others )

Bollywood stars looked glamorous as they gathered for an awards show on Saturday night. Women of The Year Awards held by Vogue magazine saw Kareena Kapoor Khan, Karisma Kapoor, Janhvi Kapoor, Karan Johar, Kiara Advani Jacqueline Fernandez, Fatima Sana Shaikh, Preity Zinta, Ishaan Khatter and many others who brightened up the event as they dressed in their best.

Kareena Kapoor won Style Icon of The Year. She chose a stunning heavily embellished multi-coloured gown while Alia Bhatt who won the Youth Icon of The Year award came dressed in a black couture gown with a trail. She was seen posing on the red carpet with her father Mahesh Bhatt and Raazi director Meghna Gulzar. Meghna won the Filmmaker of The Year award.

Janhvi made it to the event in a golden shimmery gown with a plunging neckline as she sported curly hair while Karisma Kapoor was dressed in a silver dress.

Radhika Apte was seen in red as she won the award for Trends Disruptor Of The Year (Female). Her male counterpart was Vicky Kaushal who was seen with Ayushmann Khurrana, Kartik Aryan, Kunal Kapoor, among others. Karan Johar also came to the event.

Ranbir Kapoor won the Man Of The Year award but he couldn’t attend the function as he is currently in the USA with his parents. Rishi Kapoor is currently undergoing treatment.