'I Care a Lot' review: An exhilarating pitch-black comedy with a stellar performance by Rosamund Pike 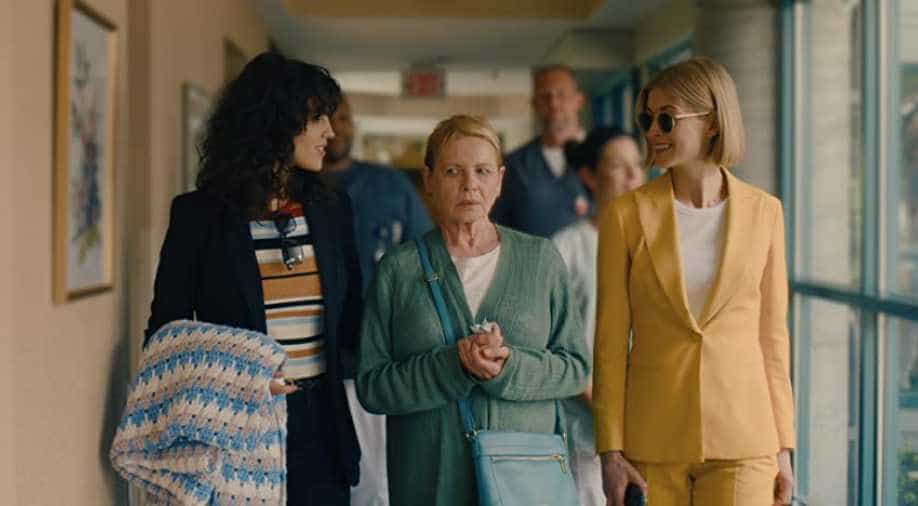 'I Care a Lot' proposes, rather boldly, that the act of taking back control in a male-dominated society shouldn’t be reserved for honourable women. Because after all, there’s a gender imbalance in the world of villainy, too.

I Care a Lot is an American dark comedy-thriller film starring Rosamund Pike, Peter Dinklage, Eiza González, Chris Messina, and Dianne Wiest. It is written and directed by J Blakeson. British actress Rosamund Pike, who received an Oscar nomination for her portrayal of anti-hero Amy Dunne in 'Gone Girl', takes another villainous turn in the satirical thriller.

The star plays Marla Grayson, a conning court-appointed guardian who brazenly takes advantage of the legal system to seize and steal her elderly clients' assets. She carries out her operation in broad daylight, working within legal parameters as much as possible, which is something that Blakeson highlights regularly — Marla is able to get away with her scam not by slipping under the radar, but by walking confidently through loopholes in the law.

In her monologue at the very beginning of the movie, she says “There are two kinds of people in this world: predators and prey.” Grayson is ambitious, shameless and poised with shark-like self-assurance and describes herself as a ''lioness''.

Grayson's character is symbolic of the evil in the world as she bribes a doctor to declare her patients mentally unfit and then persuades an overburdened, gullible judge burdened with numerous cases to appoint her as their guardian. Caring and professional in court, Marla shows her true colours out of it, as she tracks down and tricks potential clients and their families with her business and life partner Fran (Eiza Gonzalez).

As soon as she gets the legal document, she blindsides her victims, sends them old age homes, auctions off their assets, and makes a hefty profit. When questioned she acts innocent and coincidently, fortune favours the brave. She is the personification of the bottomless appetite of American capitalism, and she is so unflinching in her avarice that she can win over other sharks who recognise a fellow predator.

As her scheme begins to unravel, Marla forges on headfirst, oozing confidence and refusing to bow out or to be intimidated into letting go of Mrs Peterson's assets. Her relationship with Fran provides the only hint of her softer side. While Marla is fearless, Fran is resourceful but, they complement each other well. They both are in search of a ''cherry'' on the cake with no strings attached to act as their big professional breakthrough.

The duo meets their match in wealthy pensioner Jennifer Peterson (Dianne Wiest), whose tranquil suburban life turns out to be a disguise for a criminal network lead by an evil gangster (Peter Dinklage). His sentimental outbursts and antiques as a member of the mob provide comic relief in the otherwise serious film. The battle of the sexes and the rambunctious cat and mouse chase between Grayson and Ramon contribute to the development of the plot.

Both Marla and Roman have climbed high in their chosen spheres, and cannot help but admire the other’s tenacity. Corporate firms feeding on the vulnerable for their benefits strikes a chord with the current society we live in. The realism in the movie makes it grave and nauseating. But it is the harsh reality of life.

The predatory system of conservatorship highlighted in the film made me think about Britney Spears's conservatorship controversy which shares much in common with the central conceit of 'I Care a Lot'.

There are a few voices in Hollywood that are so distinct and deeply etched in our memories that it is impossible to look at them play out a new role and not be reminded of the one that had made them iconic. Rosamund Pike’s Gone Girl-husky voice is one such example. It acts as an asset to this film adds a layer of wonderful threat to that salacious smile that can make any line feel magnetical, appealing, and dangerous. That voice and smile were the essences of Gone Girl and this movie is somewhat indebted to that persona.

'I Care a Lot' proposes, rather boldly, that the act of taking back control in a male-dominated society shouldn’t be reserved for honourable women. Because after all, there’s a gender imbalance in the world of villainy, too.

Pike's performance as an ice-cold villain is mesmerising and reminds of her perfection in 'Gone Girl'. However, this does act as drawback as well as sometimes the audience has a hard time believing them. Dinklage is effortlessly hilarious as rogue Roman and his addiction to cupcakes and donuts is one motif that renders the much-needed comic relief to his otherwise grey character.

Eiza González’s a henchwoman in ‘I Care A Lot’ and although her role rises to prominence towards the climax, she, more or less, remains overshadowed by a splendid Pike for the better part. Chris Messina’s minor character as a corporate lawyer Dean could have developed into a full-blown parallel character.

His ego tussle with the feminist Marla ends without any twists and turns and is very predictable from start to finish. They both have one thing in common, that is, they hate to lose. And as a person with such a demeanour, Dean gives up way too easily.

Dianne Wiest, who is a brilliant and incredibly talented actor could have been utlised in a much better manner. However, her character is overshadowed by Pike and Dinklage's characters. Even though the film is compelling, the editing could have been much crisper as the movie goes off the rails near its climax. Scenes feel stretched and becomes evident that the focus of the writer was on the characters rather than the plot. He struggles to get to its conclusion in one piece. The ending feels a bit rushed and abrupt.