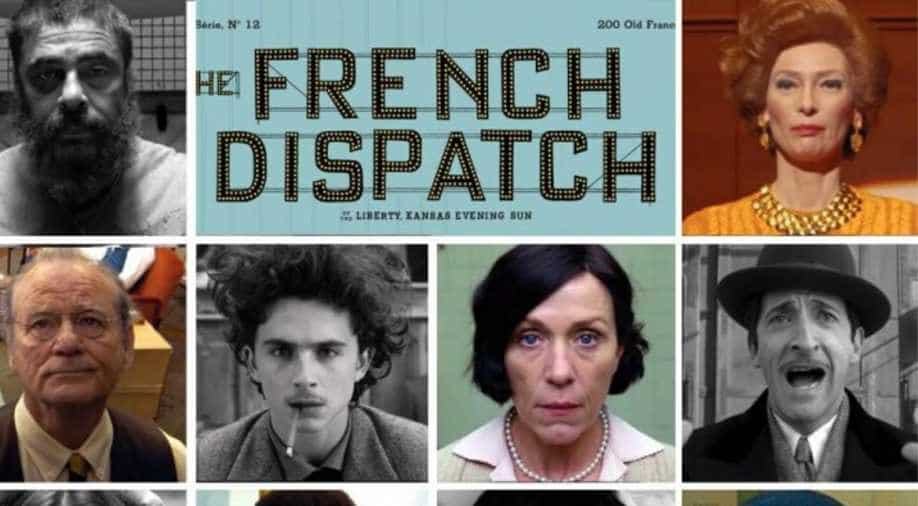 'The French Dispatch' by Wes Anderson, US Photograph:( Twitter )

Ever since it showed up in Cannes this past summer, 'The French Dispatch' has been described as “a love letter to journalism.”

Ever since it showed up in Cannes this past summer, “The French Dispatch” has been described as “a love letter to journalism.” This isn’t inaccurate — you love to see it when deadline scribblers are played by the likes of Jeffrey Wright, Frances McDormand and Tilda Swinton — but it’s nonetheless a little misleading.

The movie is not Wes Anderson’s version of “Spotlight,” in which humbly dressed reporters heroically take on power, injustice and corruption. Moral crusades are as alien to Anderson’s sensibility as drab khakis. What “The French Dispatch” celebrates is something more specific than everyday newspapering and also something more capacious. Anderson has inscribed a billet-doux to The New Yorker in its mid-20th-century glory years that is, at the same time, an ardent, almost orgiastic paean to the pleasures of print.

He might be the most passionately literary of living filmmakers, the one whose movies are most like books. Maybe that’s a strange thing to say about an artist with such a recognizable visual aesthetic, but Anderson’s meticulous pictures are themselves evidence of his bookishness. The sound design of “The French Dispatch,” enlivened by Alexandre Desplat’s playful and knowing score, is punctuated by the scratching of pencils and the clacking of typewriter keys. When a character is credited, during a television interview, with having a photographic memory, he is quick to correct the record. “I possess a typographic memory,” he insists, and the distinction offers a clue about how Anderson’s mind works.

He has always drawn inspiration from writers: J.D. Salinger in “The Royal Tenenbaums”; Roald Dahl in “Fantastic Mr. Fox”; Stefan Zweig in “The Grand Budapest Hotel”; an archive of famous and forgotten New Yorker contributors this time around. Beyond such tributes, Anderson uses the tools of cinema to approximate the experience of reading. Watching one of his movies, you are always aware of the presence of his style, and of the dense weave of references, rhetorical curlicues and half-hidden meanings through which a story takes shape. It takes some effort to follow along, and you often feel like you’re not getting everything, but that’s part of the enjoyment.

The exasperation, too, maybe. Anderson isn’t really a polarizing figure; there isn’t much to argue about. He’s a taste you either enjoy or don’t, like cilantro or Campari. “The French Dispatch” is an herbarium of his preoccupations and enthusiasms, an anthology film laid out like a magazine, with a short front-of-the-book piece and three meaty features, all decked out with editorial bric-a-brac and a somber epilogue that may be the best part.

The French Dispatch of the Liberty, Kansas Evening Sun is the full name of a weekly periodical that isn’t quite The New Yorker but also isn’t quite <em>not</em> The New Yorker. Its editor, Arthur Howitzer Jr., has a few things in common with Harold Ross and William Shawn, the men who together and sequentially established The New Yorker as a pinnacle of middlebrow sophistication in the decades before and after World War II. Like Ross, Howitzer is from the western part of Middle America (Kansas, rather than Colorado), and like Shawn he’s a soft-spoken perfectionist. Really, though, he’s Bill Murray in a Wes Anderson film, which is to say the ideal grown-up, an embodiment of impish, saturnine charm and eccentric integrity.

Howitzer’s magazine, originally a supplement to his family’s small-town newspaper, is based in Ennui-sur-Blasé, a French metropolis that isn’t quite Paris but isn’t quite <em>not</em> Paris, either. (The film was shot mostly in Angoulême, a small city in southwestern France.) Some of the staff will be recognizable to collectors of New Yorker lore — is that supposed to be Ved Mehta? Joseph Mitchell? Eleanor Gould? — but most are amalgams and embellishments.

For example: Roebuck Wright, as played by Jeffrey Wright, resembles James Baldwin in his speech patterns, body language and manner of dress. But the article he contributes to The French Dispatch is more like something A.J. Liebling would have undertaken — an excursion into the arcane (and in this case wholly fanciful) reaches of French gastronomy. The mash-up, like much in the movie, seems both preposterous and somehow touchingly apt.

It’s not really possible to spoil any of the major episodes, but it’s also foolish to try to summarize them. The cast is as enormous and as heterogeneous as the list of names in a New Yorker holiday “Greetings, Friends” poem:

And so on. The shifts in tone from melancholy to antic are an Anderson signature, heightened by switches from black-and-white to color, from live action to animation, and from what could be the ’30s or ’40s to what might be the ’60s or ’70s.

After an introduction (with voice-over from Anjelica Huston) and a prose-poem tour of Ennui (conducted by Wilson on a bicycle), we settle into a stretch of what the real New Yorker liked to call “long fact” pieces. Each feature is, in effect, a double portrait: of the writer at work on the story and of a charismatic, elusive central character, set against a busy backdrop of mayhem and intrigue. Roebuck Wright is paired with a precinct-house chef (Stephen Park); Lucinda Krementz (McDormand) with a rebellious student (Timothée Chalamet); J.K.L. Berensen (Swinton) with a tormented painter (Benicio Del Toro). The fact that both of the women writers sleep with their sources suggests that this love letter to journalism might have benefited from an editor with an eye for repetition and cliche.

In any issue of any publication, some pieces will be stronger than others. “The Private Dining Room of the Police Commissioner,” Wright’s culinary crime story, is hectic and complicated, with a nice, bittersweet payoff. Swinton’s offering, “The Concrete Masterpiece,” with Del Toro in a straitjacket and Léa Seydoux in and out of an asylum-guard’s uniform is, to me, both the silliest of the chapters and the most moving. “Revisions to a Manifesto,” with McDormand chronicling a May ’68-ish student protest (and her affair with one of its leaders, played by Chalamet), struck me as the thinnest and most strenuous in its whimsy, offering a too-clever pastiche of real-world events that flattens and trivializes them.

On the other hand, it reminded me of “Masculin Féminin,” one of my favorite Godard movies. A certain amount of the delight you find in “The French Dispatch” may derive from your appreciation of the cultural moments and artifacts it evokes. Anderson expresses a fan’s zeal and a collector’s greed for both canonical works and weird odds and ends, a love for old modernisms that is undogmatic and unsentimental.

Which is not to say unfeeling. A sign above Howitzer’s office door says “No Crying,” and while a few tears are shed onscreen, the stories themselves leave the viewer’s eyes mostly dry. But there is something unmistakably elegiac in this dream of a bygone world. The French Dispatch existed for 50 years, shutting down in 1975, and “The French Dispatch” registers the loss of a particular set of values that blossomed in that era and have since fallen on hard times.

The madman’s work painted on Ennui’s asylum walls in “The Concrete Masterpiece” eventually finds a home in a Kansas museum “10 miles from the geographic center of the United States,” thanks to the good taste and business acumen of a prairie dowager (Lois Smith). That’s not a joke. She, Howitzer and the various misfits who turn up in Ennui represent an ideal of down-to-earth American cosmopolitanism, an approach to writing, culture and the world that is at once democratic and sophisticated, animated by curiosity and leavened with irony. The movie is a love letter to that spirit, and also a ghost story.