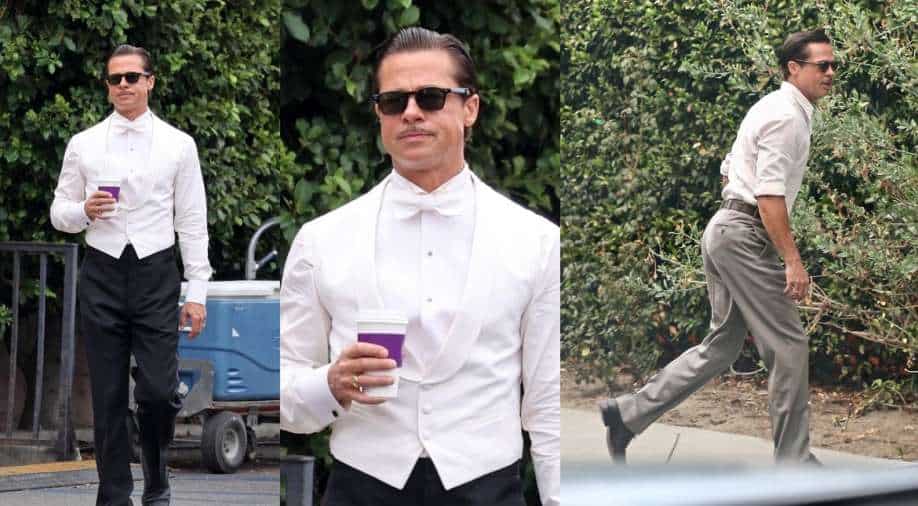 Dapper in tux: Brad Pitt spotted on the set of 'Babylon' Photograph:( Twitter )

Stylish Hollywood star Brad Pitt looked dapper in a tuxedo, dark glasses and slick hair. He was spotted on the set of 'Babylon'.

Hollywood star Brad Pitt can do no wrong when it comes to donning suits the right way.

On Tuesday, the actor looked super stylish as he was photographed walking around on the set of his upcoming project 'Babylon'. Pitt was seen in a black and white tuxedo, with dark glasses, a thin mustache and his gelled hair pulled back. He completed his look with a bowtie.

Meanwhile, Angelina Jolie and The Weeknd are making headlines after they were spotted enjoying a dinner at Giorgio Baldi in Santa Monica.

Recently, the mother-of-six and the Canadian singer spent two and a half hours inside a private section of the luxurious family-run Italian restaurant, report says.

Also read: Kate Middleton glows in gold at 'No Time To Die' premiere

Brad Pitt and Angelina Jolie are embroiled in yet another legal fight. This time it's over a lavish estate they co-own in France. However, that dispute has now been settled.

Also read: Kim Kardashian donates $3000 to mom of four who lost everything to COVID-19