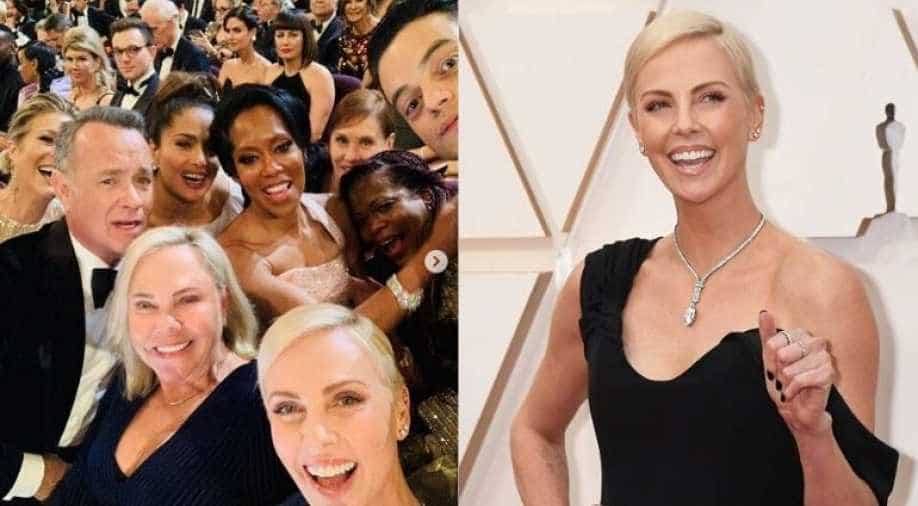 Charlize Theron's selfie was the pic of Oscars 2020 Photograph:( Instagram )

'Bombshell' star Charlize Theron posted a selfie with some prominent Hollywood stars from the Oscars which took fans back to 2014 selfie that host Ellen Degeneres had taken at the same ceremony.

'Bombshell' star Charlize Theron posted a selfie with some prominent Hollywood stars from the Oscars which took fans back to 2014 selfie that host Ellen Degeneres had taken at the same ceremony.

Charlize was nominated on Sunday night in the Best Actress category for her role in 'Bombshell' and while she did not win the award (Renee Zellwegger won for 'Judy') her Instagram post did manage to create some noise.

Also see: The complete list of winners for the 92nd Academy Awards

The selfie captured stars like Tom Hanks, Rita Wilson, Salma Hayek, Regina King, and Rami Malek in one frame.   In the background, one can also spoty filmmaker Quentin Tarantino and Keanu Reeves. The selfie also features Regina King and Charlize' mother Gerda Jacob Aletta Martiz who was her date for the night.

Fans instantly connected the selfie with a similar one that was taken in 2014 Oscars by host Ellen Degeneres and featured Bradley Cooper, Meryl Streep, Jennifer Lawrence, Brad Pitt, Angelina Jolie, Kevin Spacey, Jared Letto and Lupita Nyong'o. The selfie was uploaded on Ellen's twitter handle and created a record of being the most retweeted picture of all time.

If only Bradley's arm was longer. Best photo ever. #oscars pic.twitter.com/C9U5NOtGap

Charlize, on Sunday night, looked stunning in a Dior black gown and walked the red carpet with her mother.

Oscars 2020: The best-dressed celebrity couples at the event