From Little Bird to Queen: What this 'Game of Thrones' character's finale dress means 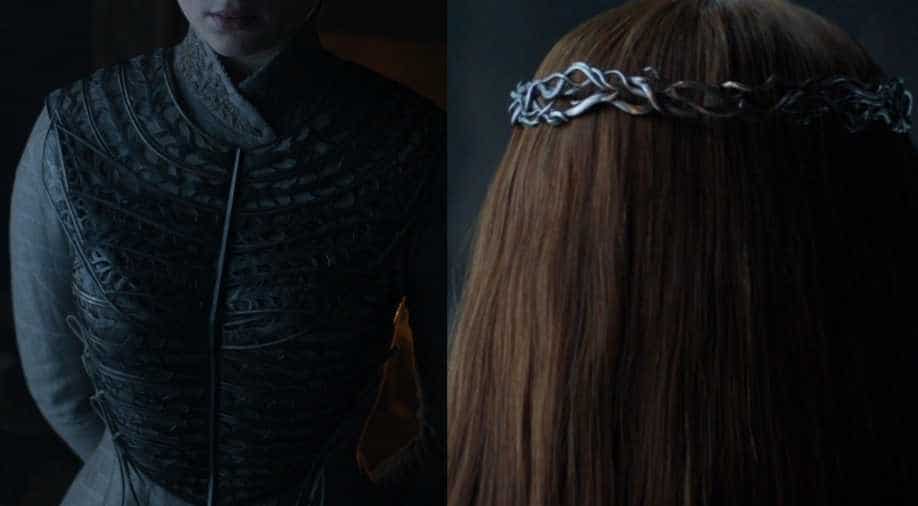 Sansa Stark's sartorial choices throughout the show have highlighted important moments of the character's journey. All hail Queen in the North!

By now all ‘Game of Thrones’ fans can agree that there was nothing set in the world of Westeros as makers continuously switched plots and theories throughout the series to keep the ending of the show as suspenseful and real as possible. Read the review of the finale episode here.

*Spoilers ahead for the season eight finale of Game of Thrones*

With Bran The Broken getting crowned as the King of The Six Kingdoms, Jon Snow getting banished for killing Queen Daenerys Targaryen and Sansa being named as the Queen in the North as she got the North free from the clutches of the King’s Landing -- lot has happened that we didn’t anticipate in the finale episode.

While we can debate and argue over the finale being disappointing on many accounts, Sansa Stark’s character arc was one of the most satisfying. From being a coy girl who liked dressing up, sewing clothes, fantasising about marrying Joffrey Baratheon and having golden hair babies as she left her home Winterfell, Sansa underwent a lot of changes. She got manipulated, abused, tortured, raped, and almost saw death before she rose as a person who is now more observant, patient and knows the difference between what’s true and what's not

Through the last few seasons, after she saves Jon in the epic battle with Ramsey Bolton, Sansa emerges as someone who now understands the art of politics. For someone who was shown naive and often gullible, the elder of the Stark girls was able to get the North what they always wanted -- freedom from King’s Landing and their own ruler.

At the time of her coronation as the Queen in the North, if you look closely, Sansa’s dress and hair reveal more about her position and state of mind than any dialogue given to her in the show. A major change from dark black to light grey, her choice of colour in dress symbolises her state of mind. Dressed as a warrior and ready-to-fight Sansa opted for dark black in previous seasons but as the situation normalises in the finale and now that she is in control, she opts for a lighter shade.

sansa stark did that pic.twitter.com/NEFXdth9vs

Her dress features red leaves, similar to those we have seen on the weirwood tree at the centre of a Godswood that is called a ‘heart tree’. It is the same tree that we have seen at Winterfell, where Arya kills the Night King as he attacks Bran in season 8 episode 3. If you remember, heart trees have faces carved into them which weep red tree sap from their eyes. Red stitching on the dress links the leaves on the fabric of Sansa's dress, which could be in reference to the red tree sap.

Sansa’s dress also has fish scales, a tribute to her mother Catelyn Stark and her ancestry. Her mother belonged to House Tully of Riverrun and their sigil is a silver trout. This only goes on to prove that Sansa has grown up to be a rooted woman who knows where she comes from --something that will help her to rule the North.

Another important takeaway from her finale look was the hair, that was nothing fancy but said a lot at the same time. Sansa has been very particular about her hairstyle and as she grew, her circumstances changed and so did her style.

From following Queen Cersei’s southern braided style to keeping half hair open and half braided like that of Margaery Tyrell, she gave many hair styling lessons to young girls who followed the show. The braids went and were followed with loose pleating up until she returned to Winterfell. After she arrived at Winterfell, she adopted a style that the Northerners followed, especially her mother Catelyn. Fast-forward to the present and the Queen in the North, at the time of getting crowned wore her hair open, without any frills, without imitating anyone else’s style. Her hair gives an important clue about her new identity -- who she is now and what she embodies as a ruler. All hail Queen in the North!