Forbes India Celebrity 100: Virat Kohli replaces Salman Khan to take no. 1 spot, ahead of all actors 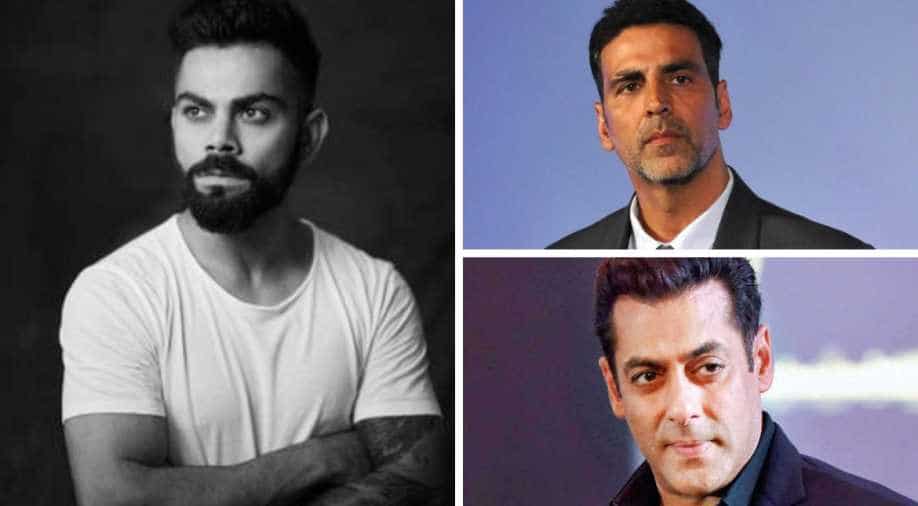 Akshay Kumar landed on the second spot on the list while Salman Khan who topped the year for several years climbed down to number 3.

Forbes revealed its Indian list of Celebrity 100 for 2019 and you will be surprised to see that cricketer Virat Kohli left all actors behind to take the first position. The Indian cricket team captain replaced Salman Khan on the first position as the handsome actor climbed down to number 3.

The second position was taken by Akshay Kumar who had several film releases this year and was also a part of many brand endorsements, making a big chunk of his annual earnings.

Virat managed his uphill task to the top position, and was successful for the first time in eight years since the launch of Forbes India Celebrity 100 List, to replace all Indian actors. He earned Rs 252.72 crore between October 1, 2018, and September 30, 2019. His earnings are a collective of match fees, the BCCI central contract, brand endorsements and an eight-figure fee for every sponsored Instagram post.

The 2019 Forbes India Celebrity 100 list is now LIVE! For the first time ever, a cricketer—@imVkohli—tops the list, pushing Bollywood biggie @BeingSalmanKhan down from #1 to #3. Check out the full list here https://t.co/7bW2G2ODYI #ForbesIndiaCeleb100 pic.twitter.com/9nNEU9D3C8

Amitabh Bachchan is on number 4 while MS Dhoni totals the top five on the list.

Another interesting thing to note is that we have two female actors in the top 10 list: Alia Bhatt and Deepika Padukone (number 8 and 10 respectively).

As for other female actors, we have first-time entrants Disha Patani, Kriti Sanon and Sara Ali Khan -- who made it because of their films, endorsements and overall buzz around them this year that translated to money.

Shah Rukh Khan kept steady in the top ten list, even though he had no release this year. He did not sign up for anything, up until now, after the debacle of ‘Zero’.

.@iamsrk occupies the 6th spot on the 2019 #ForbesIndiaCeleb100 list despite a quiet 2019, with about Rs 125 crore in estimated earnings. @RedChilliesEnt though has been scoring big with the Rs 100-crore @BadlaTheFilm and @netflix original #BardOfBlood #ShahRukhKhan pic.twitter.com/0TdTN8oWm7