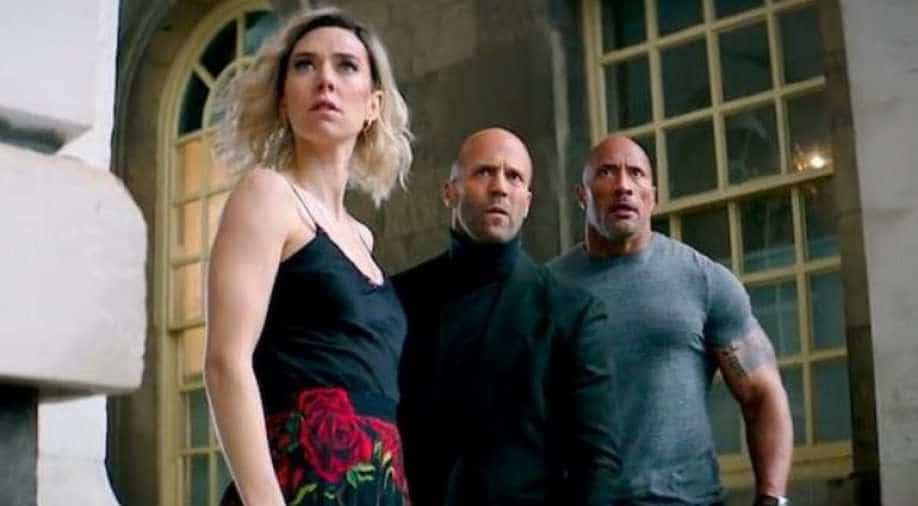 Starring Dwayne 'The Rock'Johnson and Jason Statham, the spin-off from the popular franchise may be giving us a new plot and new characters but ultimately it succumbs to tried and tested action and chase sequences making this David Leitch directorial venture a stale affair.

How much can you milk a franchise? And for how long? Questions that keep coming in your mind while you watch 'Fast & Furious Presents: Hobbs & Shaw'. Starring Dwayne 'The Rock'Johnson and Jason Statham, the spin-off from the popular franchise may be giving us a new plot and new characters but ultimately it succumbs to tried and tested action and chase sequences making this David Leitch directorial venture a stale affair.

The film is super high on testosterone to the point of being ridiculous. Everyone is trained in martial arts and everyone can outwit the other. What's the story, you ask? A convoluted plot of two rivals. Once rivals, special agents Luke Hobbs(Johnson) and Deckard Shaw(Statham), have to unwillingly team up together to save the world from a deadly virus which has been injected in another agent Hattie Shaw's palm. Hattie is Deckard's estranged sister who has to bury differences with her brother in order to save herself and the world. Family, in fact, plays an integral part of the narrative- much like the previous films of the franchise.

So who is stopping the trio from doing their job? Brixton(Idris Elba), the genetically modified 'bad guy' who declares himself as the 'black Superman' for he is unbeatable and the super agents, despite their skills, are no match to Brixton's power.

Much like the franchise, this one too has innumerable, mind-numbing, action sequences which are thrilling and will keep you on the edge of your seats. Because it has the Rock as its main protagonist, one gets to see some outlandish stunts that only suit him. There is a sequence where he holds on to a helicopter with his bare hands, he jumps off buildings without any harness and perfectly lands on his target. Rock basically can do anything and everything and the film showcases his chiseled body in all its glory. Statham undoubtedly plays his sidekick, even though his character may refuse to agree to it as Rock suggests in one sequence. The two actors, in fact, share great chemistry on screen and as they go around saving the world, they also have the choicest insults for each other. Their constant banter does ensure a good laugh. Vanessa Kirby is impressive as Shaw's sister.

There are some very interesting cameos- which are hilarious and the high point of the film. But overall, the film fails to give you the adrenaline rush that the previous films had given. The story seems a mix of Mission Impossible and Fast and Furious and overall a predictable affair. Watch it only if you are a fan of the two leads, or the franchise.