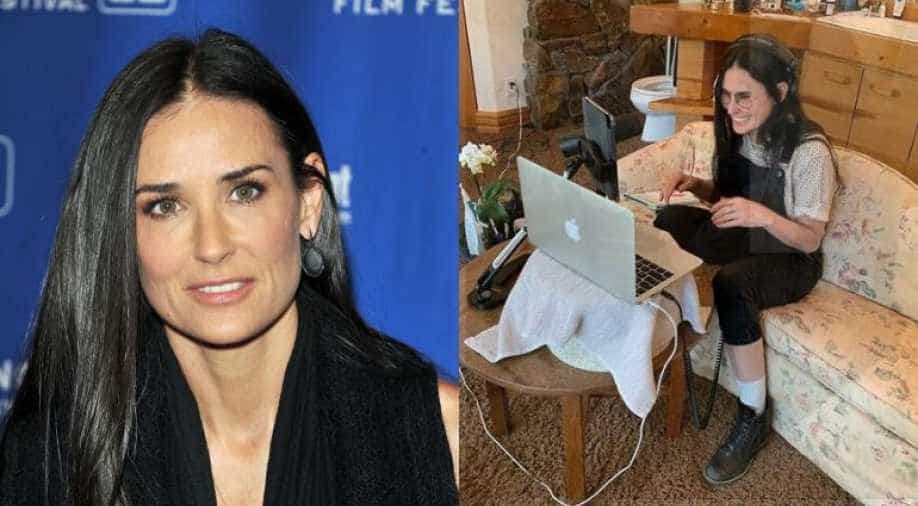 More than her new project, it was the photo that Demi Moore posted that grabbed eyeballs.

Hollywood star Demi Moore's bathroom has got the internet talking. The actress on Thursday took to Instagram to announce her new upcoming audio drama 'Dirty Diana' which will narrate a story of a struggling marriage.

More than her new project, it was the photo that Moore posted that grabbed eyeballs.

"Excited to finally share what I’ve been working on!" Moore, 57, wrote in the caption. "The first episode of #DirtyDiana drops Monday, July 13."

In the photo, Moore can be seen sitting on a couch staring at her Mac and chatting with people virtually. A tablet displaying text is propped up in front of the actress, who is wearing headphones. But when one gives a closer look at the photo one realises that Moore is actually sitting in her bathroom. One can see the washbasin behind and even the toilet is partially visible. In one photo, the luxurious bathtub too is visible. The room also appeared to have wall-to-wall carpeting.

Excited to finally share what I’ve been working on! First episode of #DirtyDiana drops Monday, July 13. Trailer in bio 🖤

Soon enough, the internet got curious and several questions popped up in her comment section.

“I can't tell if there's a couch in the bathroom or a toilet in the living room lol," one fan wrote. “LoL...I thought this was your sitting room then I saw the toilet, and in picture 2 the tub. You have a couch in your bathroom. Good one!! “ wrote another.

oh to be the tiny monkey overseeing the toilet in demi moore’s carpeted bathroom with a Joan of Arc statue and a couch pic.twitter.com/iFSf08phsC

A twitter user pointed out that a statue near the tub bears a resemblance to Joan of Arc, while a small stuffed monkey could be spotted squished between the stones making up a wall near the toilet.

"Oh to be the tiny monkey overseeing the toilet in Demi Moore’s carpeted bathroom with a Joan of Arc statue and a couch," the person wrote alongside a photo of the stuffed animal.

"Demi Moore got couch and a carpet in her bathroom. And she wears her boots in that bathroom," another fan wrote online. "Trying to understand why."

Moore is yet to react to all the comments on her post.