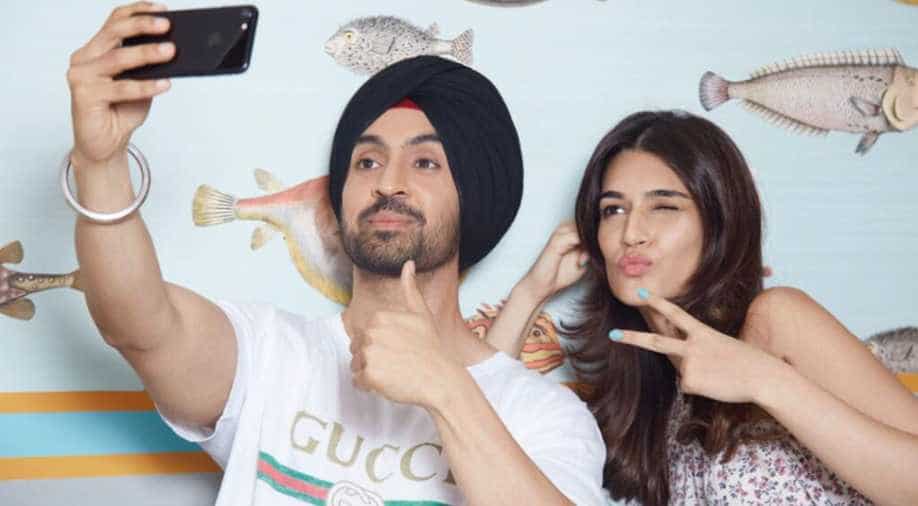 New posters of Kriti Sanon and Diljit Dosanjh-starrer `Arjun Patiala` are here to leave you amused and wanting for more.

New posters of Kriti Sanon and Diljit Dosanjh-starrer `Arjun Patiala` are here to leave you amused and wanting for more.

The forthcoming film directed by Rohit Jugraj which also stars `Fukrey` actor Varun Sharma is rescheduled to hit the big screens on July 26.

Film director Rohit shared the poster of Diljit and called him a `quirky, madcap riot` in the caption on Instagram. `Arjun Patiala` comes as Diljit`s second stint in Bollywood as a cop after `Udta Punjab.`

Posing like a total dapper on one of the posters, singer-actor Diljit is seen dressed in a Khaki uniform with a burgundy leather jacket put on over the uniform.
What comes as a surprise element in the look is the bullet belt, which holds beers cans instead of bullets. The colourful and vibrant poster reads, `Diljit Dosanjh as Arjun, Muscular nahi Cute, with you, for you, always.`

While the second poster featuring the leading lady of the film Kriti Sanon was shared by the actress herself. After playing a reporter in `Luka Chuppi`, Kriti is back again with a mic in `Arjun Patiala`. The poster shows her standing by a window in a long frock style yellow kurta with her hairs blowing in the wind. As the actor is shown holding a mic in one of her hands, the poster reads `Kriti Sanon as Ritu, Bijli se Tezz.`

Varun also shared a poster of himself as a cop riding on a sky blue scooter loaded with a number of grocery items. He looks all chirpy on the poster which reads `Varun Sharma as Onida, Isske Paas drama hai."

`Arjun Patiala` is being co-produced by T-Series honcho Bhushan Kumar and Dinesh Vijan of Maddock Films.