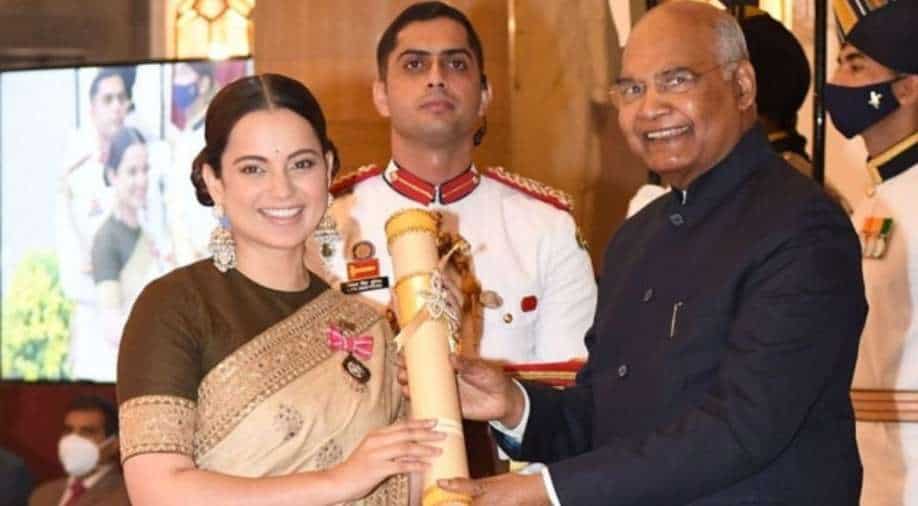 Kangana Ranaut, Karan Johar, Ekta Kapoor and Adnan Sami are among celebs who will be awarded Padma awards today at the official ceremony

The coveted Padma Awards ceremony 2021 is being held today as Kangana Ranaut and Adnan Sami were among the first ones to receive Padma Shri at the Rashtrapati Bhavan. The awards were presented by President Ram Nath Kovind.

Among other awardees from Bollywood industry are Ekta Kapoor, Karan Johar and late singer SP Balasubramaniam.

Kangana Ranaut received the Padma Shri award as she came dressed in a golden coloured saree with hair tied in cute buns. Recently she also received the National Award for Best Actress for her performances in the films ‘Manikarnika’ and ‘Panga’. Also read: Rumours or true? Reports suggest Vicky Kaushal, Katrina Kaif got engaged on Diwali

President Kovind presents Padma Shri to Ms Kangana Ranaut for Art. She is an Indian film actress and filmmaker, who is widely recognised as an actress par excellence. pic.twitter.com/xOqBAt1VoA

Speaking about the honour, Kangana shared a video elaborating her journey and why she feels she got the Padma Shri today as she stands up for the country. She captioned the video: "Humbled for this great honour…
Padmashri 🇮🇳Heartfelt gratitude for my Guru and Parents."

Meanwhile, Producer Ekta Kapoor and filmmaker Karan Johar will receive their Padma Shri today too later in the evening. Ekta had earlier tweeted, “humbled and overwhelmed. My foray into the industry started when I was just 17. I constantly heard I was ‘too young’, ‘too raw’ and it was ‘too soon’ to make things happen. Through the years I’ve realised it’s never ‘too soon’ to live out your dreams and being ‘too young’ is probably the best thing. Today, as I’m conferred with the 4th highest civilian honor- ‘Padmashri’, I’m humbled.”

Karan Johar had written, “It’s not very often that I am at a loss for words, but this is one such occasion…The Padma Shri. Such an honour to receive one of the civilian awards in the country. Overwhelmed by so many emotions right now. Humbled, elated and also thankful for the opportunity to live my dream every day, to create and to entertain. I know my father would be proud and I wish he was here to share this moment with me. #blessed.”