It's happening! RK Studio lights up ahead of Ranbir Kapoor, Alia Bhatt's wedding 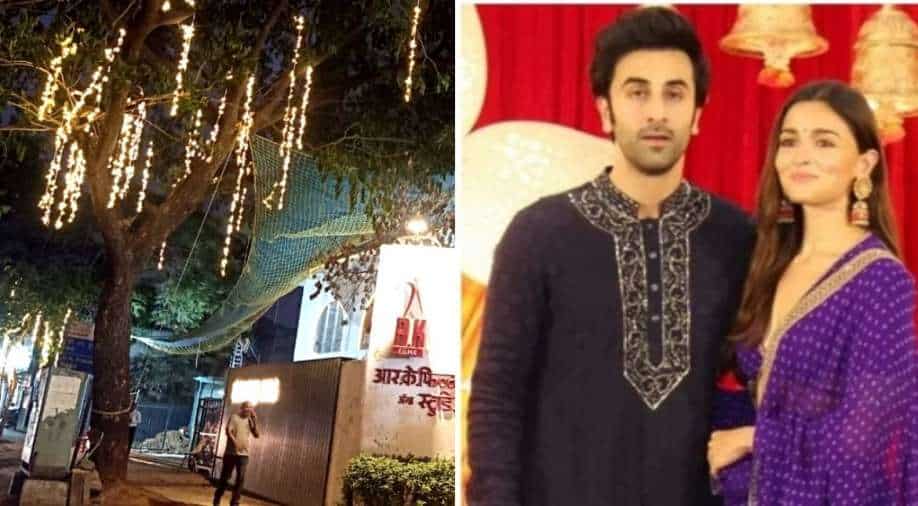 RK Studio all lit up ahead of Ranbir and Alia's wedding Photograph:( Twitter )

Bollywood's favourite couple, Ranbir and Alia are reportedly going to get married on April 17 and ahead of the big day, Kapoor family's RK Studio has been illuminated with lights all over.

The big fat Bollywood wedding of Ranbir Kapoor and Alia Bhatt is just a few days away and preparations are on in full swing.

Bollywood's favourite couple is reportedly going to get married on April 17 and ahead of the big day, Kapoor family's RK Studio has been illuminated with lights all over.

Pictures of the studio, situated in Mumbai`s Chembur have been making rounds on social media and they show the place all bright and lit up ahead of the upcoming celebrations.

Even Ranbir's new under-construction home in Bandra had been lit up with strings of lights.

A video from the Krishna Raj bungalow, which is currently under construction, went viral and it showed various workers decorating the bungalow with LED string lights.

According to sources, the couple will into the Krishna Raj bungalow once they tie the knot.

So far neither the couple nor family members have confirmed the wedding date although it has been widely reported that the festivities will begin at the RK house from April 13 onwards.

Rumours also suggest the couple will host a grand reception at the luxury hotel Taj Mahal Palace in Mumbai on April 17.

Ranbir and Alia had fallen in love with each other on the sets of their upcoming film'Brahmastra'. The film is set to release in September 2022. The two made their first appearance as a couple at Sonam Kapoor's wedding reception in 2018.