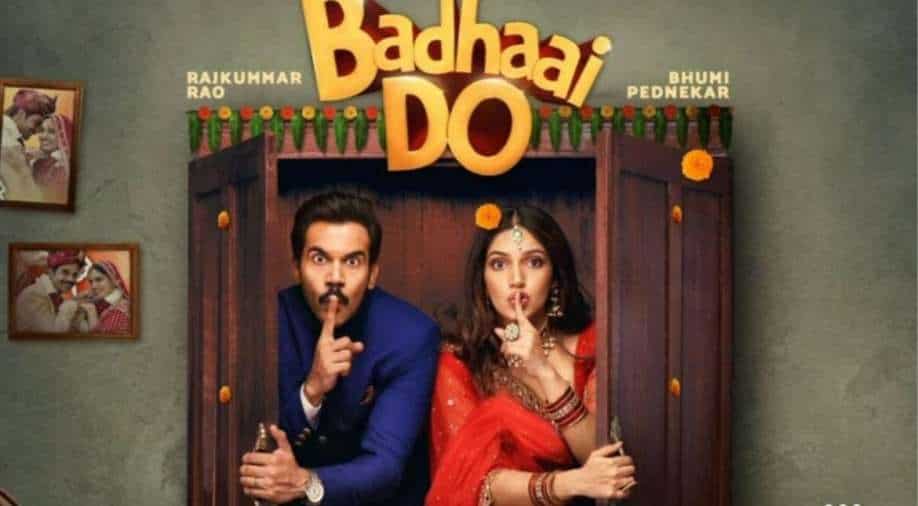 Rajkummar Rao has by now mastered the art of playing awkward everyman and his presence is a delight in 'Badhaai Do'.

There certainly exists an India that's miles away from so-called 'wokeness' sometimes taken for granted in this time and age. Here, the families are close-knit but there are prying eyes and wagging tongues. Family members spy on each other, funnily pass on unsubstantiated rumours but at the end of the day are still one unit bound by love. In such pros and cons-filled set-up unfolds the story of 'Badhaai Do'. Do not expect anything Rajshri-esque from 'Badhaai Do' based on this description above because the movie deals with gender issues.

Shardul (Rajkummar Rao) is a hunky policeman in Dehradun who is hiding from the world the fact that he is gay. He is stationed in a police station that has mostly woman police officers. He desperately trying for a transfer. Suman (Bhumi Pednekar) is a Physical Education teacher in what looks like one of the elite Dehradun schools. She is hiding her identity as a Lesbian.

Paths of Shardul and Suman cross and after a very brief 'courtship', Shardul proposes a marriage of convenience that will keep respective families from hounding them to get 'settled' in life by way of traditional marriage.

The win-win deal is sealed quickly. Marriage is done and dusted and the couple starts living under one roof, husband and wife for the world but 'roommates' to one another, as they put it. There is no physical intimacy between them and both indulge in love with those of their respective preference. What follows is a game of careful balancing as both families do not know any of this.

Rajkummar Rao has by now mastered the art of playing awkward everyman and his presence is a delight in 'Badhaai Do'. Bhumi Pednekar's understated charm brings out the small-town but headstrong girl quite well on screen.

The prying eyes of both families are soon squarely on the couple. When there is no 'good news' even after one year, the aunties and uncles resort to subtle to outright explicit hints. They obtain info about the size of the bed both sleep together in to aid their own conjectures about 'why no baby yet'. Shardul's mom is swiftly dispatched to the couple's house in Dehradun to spy on them.

Both Rao and Pednekar have been able to portray their suffocation in this 'straight society' quite well. To its credit, the movie offers space for the portrayal of closeness between the men in addition to that between women and ducks the usual criticism about gender-based movies being partial to depicting lesbian love just to grab eyeballs. The same-sex closeness is depicted without being quote-unquote "icky". You can definitely watch this film with your family.

The songs, though hummable, appear unlikely to linger in mind once out of the theatre. This is quite a surprise as we have names like Amit Trivedi, Ankit Tiwari, Tanishq Bagchi associated with the music of the movie.

Rajkummar Rao and Bhumi Pednekar carry the movie ably on their shoulders. You remember them the most. Not to forget Bhumi's love interest Rimjhim played by Chum Darang who adds to the freshness of the story.

As a product, 'Badhaai Do' does not quite appear to have been made for multiplex crowds in tier-1 cities as these viewers may have already grappled with gender-based dilemmas portrayed in 'Badhaai Do'. They may already have found solutions to these dilemmas (positive or negative!). But if you have time and want to quickly watch a no-stress movie, this Harshavardhan Kulkarni-directed flick can be worth your while.